What Happens When the Church Fasts and Prays?

What Happens When the Church Fasts and Prays? June 8, 2016 Fr. Charles Erlandson 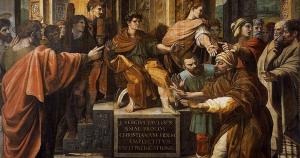 The proconsul Sergius Paulus believed.  He believed because he had seen what had been done, being astonished at the teaching of the Lord.  What he saw was a sorcerer and false prophet named Bar-Jesus, or Elymas, blinded by Paul when he said, “O full of all deceit and all fraud, you son of the devil, you enemy of all righteousness, will you not cease perverting the straight ways of the Lord?  And now, indeed, the hand of the Lord is upon you, and you shall be blind, not seeing the sun for a time.”

Paul said this because he was filled with the Holy Spirit.  Paul was filled with the Holy Spirit because Elymas stood against Paul and Barnabas and their preaching the truth.  Elymas stood against the apostles because Sergius Paulus sought to hear the word of God and Elymas, being the son of the devil, wanted to undo the Word of God.

Paul and Barnabas preached the Word of God to Sergius Paulus because they had gone to the city of Paphos.  They came to Paphos, after they had first reached Cyprus, which was Barnabas’ home city.  First, they had gone to Seleucia, having been sent by the Holy Spirit.

The Holy Spirit told the church at Antioch to separate Paul and Silas because He had been sent to live in the disciples on the day of Pentecost so that they could continue to say and do the things that Jesus Christ had done.  The Holy Spirit was sent into the lives of the believers because the Son had ascended to the right hand of the Father, which He did after He had been raised from the dead.  He was raised from the dead to show His power over sin and death and was raised after He had died on the Cross.  He died on the Cross to pay for the sins for the world and to reclaim the world to Himself.

You may have noticed something strange about my re-telling of the story of Paul and Barnabas in Cyprus: I’ve told it backwards.  I’ve done so that we might all better see the chain of events of this story and trace them back to their origin.

Do you see it?  Do you see the starting point which ended in the defeat of Satan in the person of Bar-Jesus and in the conversion of Sergius Paulus?  What was it that set this wonderful chain of events into motion, at least the immediate cause in Acts 12?

The starting point of God’s mighty work in the Body of His Son was the faithful worship of His people.  It’s difficult to tell whether or not the church at Antioch is having a worship service or not, but it seems as if they were.  The word used in verse 2 is “leiturgeo”, from which we get our English word “liturgy,” which literally means the work of the people (think of “laity” and “ergonometric”).  It could mean service to the Lord, more generally, but the church seems to be gathered together, not independently, to serve the Lord.  As they worshiped, they were also fasting, which the Lord Himself seemed to assume His disciples would be doing.

What happened when the Antiochian church worshiped and fasted?  The Holy Spirit spoke to them, they commissioned or ordained Paul and Barnabas, and Sergius Paulus (and later many others) were saved.

There’s a lesson here.  While we search in vain for God’s clear will in our lives, we sometimes miss one of His primary means of coming to us and speaking to us.  While we assume that God will speak clearly to us when we serendipitously read the Bible or think about His will, He’s calling us to worship Him.  While we wait for the random answer to our prayers to hear His will, He is calling us to seek Him in worship.

When’s the last time you approached the corporate worship of the church expecting to hear the voice of the Lord speaking to you?  This isn’t an isolated case.  St. John in Revelation seems to be worshiping God in the liturgy on the Lord’s Day when he has his great revelation.

Again, I’m struck by the fact that I am too often a Martha, busily, worriedly, serving the Lord, when He really wants me to serve Him in the “work of the people,” the liturgy, the public worship.  Of course, all of these work together: the liturgy, private devotions, and holy living.  God can and does reveal Himself to us in all of these and especially as He comes to us in them together.

What’s important is that we are truly kneeling before the Lord, worshiping Him and giving up ourselves to Him as a living sacrifice.

Humor me.  Try this experiment next Sunday.  Go with your ears wide open, listening attentively to what the Lord is saying that Lord’s Day.  Go, having prepared your heart, if not with fasting (but why not?), then at least having devoted some time to preparation to meet Him.

In fact, come before Him every day with this attitude and habit, and see what happens.  Who knows where He’ll call you.  And who knows who will be blessed as a result.  He who has been faithful with little will be given much.

One thing is for sure: if you do so, God will be glorified, and you will be blessed by Him.

Prayer:  Father, I abandon myself into Your hands;

do with me what You will.

Whatever You do I thank You.

I am ready for all, I accept all.

Let only Your will be done in me,

as in all Your creatures,

I ask no more than this, my Lord.

Into Your hands I commend my soul;

with all the love of my heart,

for I love You, my God, and so need to give myself —

to surrender myself into Your hands,

without reserve and with total confidence,

for You are my Father.  (Charles de Foucauld)

Resolution:  I resolve to prepare myself for the Lord’s Day this next Sunday and to go intending to hear the Lord when He speaks to me.

The Conversion of the Proconsul – U.S. Public Domain 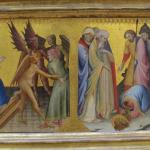 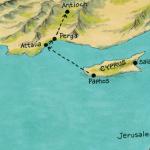 June 9, 2016 The Redemption of St. Mark
Recent Comments
0 | Leave a Comment
Browse Our Archives
get the latest from
Give Us This Day
Sign up for our newsletter
POPULAR AT PATHEOS Evangelical
1

Evangelical
John 4:15-26 - The Well
Give Us This Day
TRENDING AT PATHEOS Evangelical