The commandment to obey God’s commandments, to not indulge the flesh, to not commit fornication, uncleanness, evil desire, covetousness (a form of idolatry), anger, malice, blasphemy, filthy language, lying, etc. are so numerous and so forceful in the Bible that they overwhelm me.

Good!  They are meant to overwhelm the Old Man in me, who secretly believes that he is capable of getting rid of the sin in my life.  The Old Man goes down fighting.  Even when it’s clear that God has a hold of me and won’t let go (if I don’t), the Old Man is taking one last desperate shot at me (I would say “throwing one last Hail Mary pass,” but that might seem too incongruous).

This is the way he plots his final act of pride.

“Alright, men, I know it’s been a tough fight so far, and a lot of our comrades in arms have fallen.  The Enemy has been fighting a war of attrition, and Blasphemy, Filthy Language, Malice, Hatred, and Gluttony are gone.  But even if they’re wounded, we’ve still got Anger, Covetousness, Lust, and, of course, me, your humble leader, Pride.

I’ve analyzed the latest video of the battle, and I think I see what our problem is.  We’ve been fighting the old war all over again.  I know what I’m about to say is a desperate maneuver, but it’s all we’ve got.

Why not use his own power against him?  He’s gotten cocky about his latest successes, and he’s beginning to believe that he’s done it by his own power (good work on my part, if I do say so myself.)  Let’s lure him into believing that the way to defeat us is by a head-on battle in which he takes the lead.  And then, when we fight to a standstill and there seems to be no advance for a long period of time, he’ll begin to get discouraged.

You guys keep him distracted with temptation or apathy, and I’ll disguise myself

as Faith.  That guy’s a sucker for anything that goes by that name.  He’ll believe I’m here to help him.  I’ll hold a little pep rally, praise him lavishly, and tell him I’ve been growing so big lately thanks to him.  And then he’ll allow me to lead the battle against you, and of course, I’ll you – I mean we – will win.  It’s a foolproof plan!”

Sometimes, we mistakenly call it will power, meaning self-will.  It is like some dieters.  They try, just by sheer will power, to stop eating certain things.  In the end, they only obsess more and more about food, becoming starving gluttons in the process.

“Death to fatty foods!” we declare, and then proceed to stuff our mouths with all the carbs we can get our hands on.  Or we make a heroic effort for a short while, following a short-term, extreme diet, forgetting that a diet is an entire attitude and life of eating, and not a short-term program.

We do the same thing in our spiritual lives.  We make New Year’s Resolutions that don’t survive the month of January.  We fight heroically against our besetting sins, and yet wonder why we end up losing.

The truth we forget is that it is impossible to undertake mortification without also undertaking sanctification.  The only way to take off the Old Man is by putting on the New Man, who is Jesus Christ.  If you faithfully put on Jesus Christ every day and live your life in Him, then you will find that mortification is indeed possible.

Again, it is like the world of food.  Eat all the fruits and vegetables you can handle – eat 8 servings a day – and you won’t be able to eat very many processed foods.  Put on Jesus Christ every day, and His things, and you’ll find that the things of the world are not so powerful in your life anymore.

It is good to work on the sins in your life.  It is good to fast: in the Sermon on the Mount Jesus assumed we would pray, fast, and give alms.  It is good to give up good things for a time, if they help break you of your attachment to the world: food, speaking, TV.  These are called the disciplines of abstinence.  Dallas Willard lists these as Solitude, Silence, Fasting, Frugality, Chastity, Secrecy, and Sacrifice.

For He is the New Man, and He alone is our righteousness.

Resolution and Point for Meditation:  I resolve to meditate on one discipline of abstinence or one discipline of engagement that I have heard the Lord asking me to engage in (preferably one of each!).  As I find a practical way to do each, I resolve to remember that in doing so I am putting on Jesus Christ and must ask for His grace.

Prayer:  Lord Jesus Christ, who fasted and prayed and submitted and sacrificed that we might live, help me to seek you anew each day.  Help me today, by Your all-sufficient grace, to show my love for you by caring less about the world and more about You.  Amen.

November 7, 2013 Friday Trinity 23 - Colossians 3:12-17
Recent Comments
0 | Leave a Comment
Browse Our Archives
Related posts from Give Us This Day

Evangelical
James Clark - Book Review of Take This...
Give Us This Day 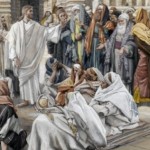 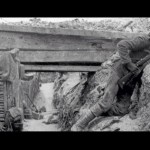 Evangelical
Luke 21:5-19 - The Quiet Spiritual Battle
Give Us This Day
TRENDING AT PATHEOS Evangelical