The Greatest Mystery in the World

The Greatest Mystery in the World November 9, 2015 Fr. Charles Erlandson 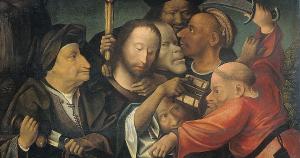 What is the greatest mystery in the world?

Paul spends much of Colossians 1 speaking of the power and the glory of Jesus Christ.  He is the creator of all things, and in Him all things consist.  All the fullness of the Father dwells in Him, and He is the image of the invisible God.

But as amazing as the Second Person of the Trinity is in His being, it is what He does that is utterly astounding – and mysterious.  The Son of God, all-powerful and all-glorious, became a man that He might reconcile all things, both in heaven and on earth, to Himself.  The ultimate mystery is that God became man to reconcile the world to Himself.  It is a mystery because even the Old Testament Israelites only had dim premonitions of the wonders God would work, and the pagans wandered around not even acknowledging their need salvation.  But now, through Jesus Christ, this mystery has been revealed to the entire cosmos.

But it gets even more mysterious, in the sense of being strange and wonderful beyond belief, when we consider that God didn’t only choose to reconcile the world to Himself by His Son (as strange and wonderful as that is) – He also chose to recruit us to reconcile the world.  He chose us, who are the chief destroyers of peace and lovers of enmity.  He chose us, these little parts of His immense creation, who happen to be created in His image.

As difficult as it is to imagine God becoming a man, it almost makes sense to me if I think in terms of a perfect man who was born by the power of the Holy Spirit.  But just when I accept that, I am faced with a very personal mystery and wonder that makes my little world dance and swirl.  It is this: that Jesus Christ has chosen to dwell in Charles David Erlandson and ___________ (fill in your name) and to make us His ministers of reconciliation and salvation.

I know my own sinfulness, and I know my own weakness even better.  How strong, how certain of His power and purpose must God be to dare so audaciously to recruit someone like me to do His holy will?  And yet here I am, and here He is, living in me: Christ in me, Christ in us.

The work of salvation and reconciliation is entirely of Jesus Christ the Omnipotent One, and yet He sovereignly chose earthen vessels such as St. Paul and me and you to be His co-laborers in the ministry of reconciliation.  What God could have done entirely by Himself, He chose to do through you and me.  This is another part of the mystery of the Incarnation – not just that God became man but that because God became man, man is now united with God so that He is empowered by God to do His holy will.

Once we were alienated and the enemies of God, but now He has reconciled us to Himself, through Jesus Christ, to present us holy and blameless (verses 21-22.)  But now that we are ministers of reconciliation, which is salvation, are we to remain passive and reject the Spirit of Christ in us?  God forbid!   We are to continue in the faith, grounded and steadfast.  We are to do the good works that He has equipped us to do, chief of which is to act as ministers of reconciliation.

What utterly flabbergasts me is that God would choose to work through a little wimp like me, and a sinful one at that.  And yet, like Paul, he has chosen you and me to teach every man in all wisdom that we may present every man perfect in Jesus Christ.  To this end, like Paul, we must labor and strive mightily according to His working which He works mightily in us (verses 28-29.)

With a mystery so incredible and inspiring, the natural man in me has a sneaking suspicion that there must be a catch somewhere, like in the story of the Monkey’s Paw or whenever the oracles are consulted and they give an ambiguous answer.

Here’s the catch: that if Christ is in us, He will act through us in the way He acted as Jesus of Nazareth. And with the Christian armor of God comes a big fat target on it saying, “Shoot me, for I am a minister of the peace of God.”  If we choose to fully accept our impossible (but possible with God) mission of reconciling the world to God and making men and women His worshipers and disciples, then we are also accepting resistance and hostility from the world.  As partakers of Jesus Christ, we get all of Him – the glory and the suffering – and the latter is the means to the former.

Paul rejoices in his sufferings for the Colossians (1:24), and he has had a great conflict for them (2:1.)  If we are united to Jesus Christ and He is in us, then we may expect to suffer for His sake.  In some cases, this will mean outright persecution.  But most of the time, it will mean all of the weaknesses, difficulties, and sufferings that come with any human life.  But in Christ, all of these sufferings take on new meaning, if the suffering is suffered for His sake, as a minister of reconciliation.  By suffering in your body, for example, God is in the process of reconciling your body and soul.  By suffering in your relationships, and yet allowing God to work in them, God is in the process of reconciling the ones made in His image who are not at peace.

Paul says that he fills up what is lacking in the afflictions of Christ (1:24.)  But I thought Jesus Christ had completed everything.  On the Cross, yes, but as His Body here on earth (1:24) we are to continue to do the things He began to say and do.  For the sake of the Body of Christ, the Church, which is to say, for the sake of Jesus Christ, we are to suffer as Christ suffered.  Our lives are to be filled with ceaseless labor as ministers of reconciliation.  Jesus Christ and Paul are our patterns.  And Christ is in you.

I told you there was a catch.  But what a glorious catch!  For out of our suffering for Christ comes the crown of glory, if we have been faithful ministers and stewards.

Making disciples for Jesus Christ is hard, painful, and often thankless work.  But it is the ministry of reconciliation and salvation of which you and I have been made stewards (25.)  If Christ is in you, then you are one of His ministers, and you are a steward of His mystery of reconciliation.  The job of every steward is to prove faithful in using the treasure the Master has entrusted to him.

Here is the most astounding part of all: God has entrusted the knowledge of Him and His grace to you.  If Christ is in you, and if you are His minister, then what you do with the treasure God has given you has everything to do with how much of the world is reconciled to God.

You may think you have better things to do.  You may resist the challenges and pains of Christian ministry.  It’s interesting how we complain when the ordained ministers seem to have the Word entrusted to them in a special way and we feel deprived sometimes because they have been ordained to lead and rule.  Yet when we hear about the difficulty of ministering, well then that’s the job of the clergy, isn’t it?

The ministry of reconciliation is the job of every Christian.  The call to be a disciple is the call to make disciples, to reconcile the world to Christ, who is in us.

Prayer:  All praise be to You Father, because through Your Son You have reconciled the world to Yourself.  My heart is overwhelmed by Your love and grace and by the fact that Your Son now lives in me by Your Holy Spirit.  Through the grace of Your Son and the fellowship of Your Spirit, equip me to be Your minister of reconciliation.  Give me courage to give up myself for this heavenly ministry which You have entrusted to me, through Jesus Christ our Lord.  Amen.

Resolution and Point for Meditation:  I resolve to spend time today meditating on what it means to have Jesus Christ in me and to seek one practical way to act more faithfully as His minister.

November 10, 2015 Baptism and Covenant
Recent Comments
1 Comment | Leave a Comment
Browse Our Archives
get the latest from
Give Us This Day
Sign up for our newsletter
POPULAR AT PATHEOS Evangelical
1

Unbelievable, But True
Preventing Grace
Related posts from Give Us This Day 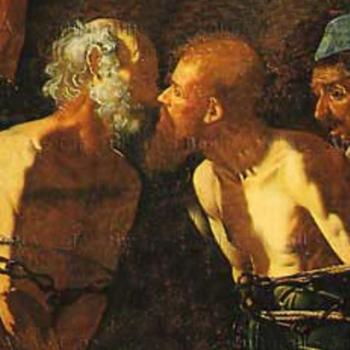 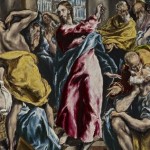 Evangelical
John 2:13-25 - Cleansing the Temple
Give Us This Day
TRENDING AT PATHEOS Evangelical