Open almost any page of almost any newspaper and you can’t help but be struck by the fact that the world is in chaos.

We sent 1000s of our troops to Iraq because Saddam Hussein threatened the peace of the region and of the entire world.  We have 1000s more troops in many places around the world – all to keep the peace.  In our own neighborhoods, we read of robberies and murders, and in the Episcopal Church USA and the Anglican Communion worldwide we hear of divisions and a lack of peace.

If there is one thing we all want and need it is peace in our time and peace in our lives.  And yet the average person in the world has about as much idea of how to achieve peace on earth as does Miss America.

In the 60s, hippies began flashing each other the sign for peace.  They wanted peace with their fellow man without peace with God.  But I don’t believe many of those saying “Peace” found true peace.

In families, where there is especially to be love and peace, we find husbands in conflict with wives; parents and children fighting, and children at each other’s throats.  There is often so little peace in the family that some people spend all their time at work so they don’t have to be at home for very long.  And it wasn’t long after Adam and Eve’s sin that one of their sons, Cain, killed another son, Abel.

In Ephesians 2:11-20, Paul speaks of one of the greatest sources of enmity and hatred in the ancient world (and one which hasn’t completely ended today) – enmity between Jews and Gentiles.  Though the Temple was constructed to worship God so that man could find peace with God, the Temple was a symbol of the division between Jew and Gentile.  Herod’s temple, the one that Paul would have known, was a magnificent and beautiful structure.  It was a massive structure built on a mountain and must have looked like an island rising up around a sea of walls, houses, and streets.  It measured almost 1000 feet on each side and so encompassed nearly 1,000,000 square feet.  By some estimates it could contain within its circumference more than 200,000 people.  The temple was crowned by a mass of snowy marble and glittering gold and must have been a spectacle for all to behold.

This “dividing wall of hostility,” to which Paul refers, is an allusion to Herod’s Temple and its literal dividing wall.  Outside the Temple was a spacious court called the Court of the Gentiles, from which Gentiles could see the Temple but not enter into it.  The Temple was encompassed by a great stone wall that had a sign saying, in effect, not “Trespassers will be prosecuted,” but “Trespassers will be executed.”  The sign forbade any foreigner from entering, under penalty of death.

The irony of Jerusalem today is that it is a city which means “possession of peace” and yet is perhaps the place of greatest enmity and strife in the world.

Thanks be to God, that through His Son, He has done for us what we could not do it for ourselves!  Now we who were far from God and far from peace are brought near to God (verse 13.)

In the first half of Ephesians, St. Paul describes the painful war with God which we call sin, the wages of which are death.  But as St. Paul yesterday offered us the grace of God to save us, today he offers us peace.  By Jesus Christ, we have access to the Father (verse 18.)

The veil of the Temple, separating Holy of Holies from Holy Place, symbolized that man could not enter into God’s presence.  This veil was an enormous 60 x 30 foot curtain that was four inches thick and took 100 men to move.  This veil was literally torn when Christ died.  But much more impressively, God tore the veil that separated man from God and made it possible for man to live in peace with God once again.  And now we have access to the Father.

This then, the work of Jesus Christ, is the secret of peace.  Through the Cross, God has reconciled us to Himself and reconciled Jews and Gentiles into one body – the Church.

For this was God’s plan of peace, that only by entering the true Temple – Jesus Christ Himself – can we have peace.  Husbands and wives, parents and children, Jews and Gentiles can now have peace through Jesus Christ who is our peace.

God doesn’t promise that magically all of your problems with people will be solved when you become a Christian – but He does promise that if you make peace with Him, that He will transform you.

If you do not have peace this morning – if you know in your heart, that you are always angry and unfulfilled; if you know that there is a relationship with those close to you in which there is no peace; whether you are in conflict with God, with someone else, or with yourself; there is one thing you need to know: Jesus Christ has done everything necessary for you to find peace in your soul.  The peace which the world cannot give, God freely offers to you through His grace.

But you must accept the terms of peace with God that He offers, and those terms are that you surrender yourself to Him completely.  If you want true peace, lasting peace, then first find peace with God – a peace which comes only through a faithful relationship with His Son Jesus Christ.

You are now members of the household of God (verse 19.)  You are fellow citizens with the saints!  You were once foreigners to God and His household, but now you are His children and His saints (verse 19.)

In fact, you, and all the saints, are now God’s holy Temple where He dwells (verse 21)!  Herod’s temple was magnificent and beautiful, but it was ultimately a symbol of our separation from God and from each other.  Herod’s temple was full of glory and grandeur, but by A.D. 70 it was reduced to rubble and never seen again.

But now the true temple of God has been revealed – and it is you – it is us, the Body of Christ.  We are where God dwells with man and where the reconciling work of Christ is made real.  You.  Me.  Us.  The Church.

Are you waging a secret war with those around you?

Do you want peace as you’ve never known it before?

Then seek first peace with God, and the peace of God, which passes all understanding will keep your hearts and minds through Jesus Christ.

Prayer:  Thanks be to You, my loving Father, because You sent Your Son to make peace between You and me, when I was by nature Your enemy.  Thank you for tearing down the wall of separation between us.  I pray that I might not rebuild the wall and separate myself from You by sin.  Where I am not at peace with my brother or sister, help me to seek peace, remembering the Cross of Christ by which I may find peace again.  Amen.

1.  Consider carefully the places in your life where there is no peace.  Prayerfully, present each of these before Jesus Christ who is your peace.  Pray for peace, and ask God what steps you should take in one of these situations to restore peace, as much as it lies in your power.

2.  Remember situations in your life where God has brought peace.  Give thanks to God for His salvation, and be encouraged by His promise of peace in other situations.

3.  Are you at peace with God?  If not, look back at the resolutions you have made in the past to discover the source of enmity.  What steps is God asking you to take to find peace with Him?

Resolution:  I resolve to seek peace in one situation in my life where there is not peace.  It may be with God Himself (best remedied through repentance – confession and penitence), or it may be with another person.

January 15, 2014 Thursday of Epiphany 1 - Ephesians 3:1-13
Recent Comments
0 | Leave a Comment
"Excellent exposition!"
Richard Lee Wednesday of Epiphany 1 – Ephesians ..."
"In your wonderful commentary you say "In Ephesians Chapter 2, Paul is not only concerned ..."
Richard Lee Tuesday of First Sunday after Epiphany ..."
"Correction: Jesus Christ Has a Body – and It’s the True Evangelical Church who obediently ..."
machgman Jesus Christ Has a Body – ..."
"You might want to include an editing process that occurred after some of the original ..."
Randy Thompson How Did We Get the Bible?
Browse Our Archives
get the latest from
Give Us This Day
Sign up for our newsletter
POPULAR AT PATHEOS Evangelical
1 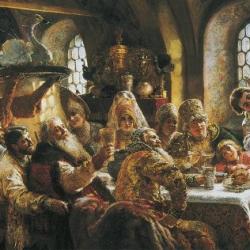 Evangelical
What Do We Mean by the Communion of...
Give Us This Day 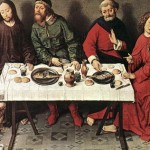 Evangelical
Luke 7:36-50 - Anointing The Feet
Give Us This Day

Evangelical
Mark 12:18-27 - What will the Resurrection be...
Give Us This Day
TRENDING AT PATHEOS Evangelical