Why Did God Strike Ananias and Sapphira dead?

Why Did God Strike Ananias and Sapphira dead? May 17, 2016 Fr. Charles Erlandson 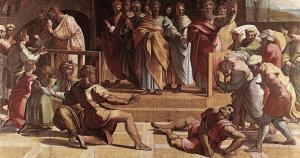 The story of Ananias and Sapphira begins not with Ananias and Sapphira but with the attitude of the early church.  That attitude was one of love and unity.  In 2:44-47, we read one of the most beautiful descriptions of any church anywhere (even more beautiful than St. Peter’s or St. Paul’s or the Crystal Cathedral!): “Now all who believed were together, and had all things in common, and sold their possessions and goods, and divided them among all, as anyone had need. So continuing daily with one accord in the temple, and breaking bread from house to house, they ate their food with gladness and simplicity of heart, praising God and having favor with all the people. And the Lord added to the church daily those who were being saved.”

So important is this attitude of the early church that St. Luke feels compelled to write about it again in 4:32-35: “Now the multitude of those who believed were of one heart and one soul; neither did anyone say that any of the things he possessed was his own, but they had all things in common.  And with great power the apostles gave witness to the resurrection of the Lord Jesus. And great grace was upon them all.  Nor was there anyone among them who lacked; for all who were possessors of lands or houses sold them, and brought the proceeds of the things that were sold, and laid them at the apostles’ feet; and they distributed to each as anyone had need.”

In particular, we read in 4:36, there was a man named Joses (Barnabas), who was a Levite from Cyprus.  He had land, sold it, and brought the money and laid it at the apostles’ feet.

From Barnabas, we learn a few important things.  First, when Luke records that the people had all things in common (verse 32), it’s obvious that it wasn’t “communism,” even if you take out all the torture and bloodletting and general superfluity of naughtiness that Communism involves.  From Barnabas we learn that the early Christians still retained legal right to their property and possessions.  What is remarkable about the early church, therefore, is that even while they freely retained their legal ownership over their possessions, “neither did anyone say that any of the things he possessed was his own” (verse 32).

Isn’t this the attitude we ought to have, that on the one hand, God has given us legal and earthly ownership of our possessions but that on the other hand, since God is the ultimate owner we should not think of them as exclusively our own?

Whenever God’s people had this attitude in the book of Acts, they were blessed.  They had favor with the people (2:47), none of the early Christians were in need (4:34), and great grace was upon them (4:33).  It must have warmed the hearts of the early Christians every time someone like Barnabas sold what was his, took the money, and laid it at the feet of the apostles.

But when God blesses His people through their faithfulness to Him, men are tempted to receive the blessing of God without faith and faithfulness.  And so we come to the sad story of Ananias and Sapphira.

“What if it were possible,” we can almost hear Ananias and Sapphira saying, “to sell one of our possessions (I know we’re still arguing about whether it should be your mother’s ring or my prize cow), take some of the money and give it to the church, and retain a hefty sum for ourselves?  Yes, we’re out a little money, but we still get to keep some of it.  And think of the praise we’ll get!”

And now for a comic interlude, before things get too serious.  When I was in ninth grade, my twin brother Danny had something funny happen to him.  He was in Mr. Loth’s health class, and the class had just gotten back their graded tests.  As Danny perused his test, he discovered that Mr. Loth had made a grading error and had not marked a question wrong that Danny had missed.  Danny, who was both honest and the smartest kid in his class, upon discovering Mr. Loth’s error, promptly took this test up to Mr. Loth.

“Mr. Loth, you made a mistake on my test.  You should have counted this one wrong.”

Mr. Loth looked at the paper, thought a second and then said, “You’re right: that one should have been wrong,” and then handed Danny back his paper without taking any action.

Billy Sims, who tried hard to be a bad kid but was basically too nice to pull it off, saw his opportunity.  He, too, had missed a question that Mr. Loth had not marked wrong.  Seeing what just happened to Danny, here was his chance to look like a good guy but without having to sacrifice any points on his test.

“Mr. Loth, I missed a question on my test too that you forgot to mark wrong.”

Mr. Loth looked at the paper, thought a second and then said, “You’re right, Billy: that one should have been wrong.” But then he took out his red pen, deducted 3 points, and handed the paper back to Billy Sims.  (Comic interlude off.)

As we know, Ananias and Sapphira went through with their plan.  They were under no compulsion to have sold their property, except maybe a little subtle peer pressure.  But they sold their possession, not from the Spirit of love and unity, but from a wicked spirit of pride.  In the end, as we know, they both were struck dead.

And this is the part that offends us.  Wasn’t this, well, a little harsh.  I mean, come on Lord, it was just a little white lie.  And they did some good: they really did give some money to the church for the poor.

I’m not sure how you’ll interpret this passage, but I’m going with the idea that God is completely holy and just.  If He struck Ananias and Sapphira dead, then they deserved it.  And this is where things get really scary.  We often ask the question “Why?”  Why did God strike Ananias and Sapphira dead?  Yes, I know He did things like that in the Old Testament (and that’s why I don’t read the Old Testament much).  But I thought He wasn’t like that anymore in the New Testament.  I thought it was the Love, Love, Love channel all day all the time.

Ananias and Sapphira seem like particularly proud and sinful people, but are they really that much worse than some of us, even Christians?  What is our attitude toward our possessions?  Do we believe that it’s all really God’s and that we’re just stewards?  Do we cheerfully give our 10% or more, or do we hoard it for ourselves, rationalizing why we can afford a new car and larger house and even a single luxury item and yet can’t afford a tithe?

Do I willingly, joyfully, have the attitude that if God asked me to sell off some of my possessions to provide for a brother or sister in the Lord who truly needed it I would do it?

Or have I done some of the good deeds I’ve done with a secret hope that someone will notice and give me a little credit?  Have I ever shaded the truth a little bit to make myself look better?

To make matters worse, we have to count not only the sins that we think are directly offensive to God but also the sins against His Church.  Peter speaks as if God and His people are one.  He connects men (the apostles) with God (the Holy Spirit), telling Ananias and Sapphira that they had not lied to men but to the Holy Spirit (who is one with the Church).

It’s easy to see why we might wonder why God was so harsh on Ananias and Sapphira.  It’s likely that just as God performed miracles through the apostles that we don’t commonly see today, He also struck people down in a dramatic way that we don’t often see today.  They seem like flip sides of the same coin.  Without getting into a discussion of why God acted so dramatically then, at the beginning of the Church, but doesn’t now, the question remains: “Why?”

Because God is not only holy and just but also merciful and loving.

Prayer:  Lord Jesus Christ, Son of God, have mercy on me, a sinner.

Point for Meditation:  Meditate today on the ways in which you have acted like Ananias and Sapphira.  Confess your sins, and repent of them.  And then bask in the mercy and forgiveness of God.

Resolution:  I resolve to spend time today confessing my sins that I might receive the blessed mercy of God. 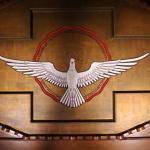 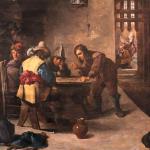 May 18, 2016 Voices and Choices
Recent Comments
0 | Leave a Comment
Browse Our Archives
get the latest from
Give Us This Day
Sign up for our newsletter
POPULAR AT PATHEOS Evangelical
1

What Do the People Love?
Cranach
Related posts from Give Us This Day