No one is above critique. Democrats have, for the past 50 years, benefited from the unwavering support of African-Americans, but have routinely silenced our voices whenever it was time to address systemic racism and white supremacy. In fact, many progressives reading these first two sentences have recoiled in disgust and are questioning whether they should continue reading. Similarly, in the face of organized and persistent action from Black Lives Matter, many white progressives have devolved into the same racist lecturing and faux-reasoning as the conservatives they incessantly point the finger of guilt. The Democratic Party has a race problem and is not above critique.

When Black Lives Matter protested at Netroots Nation 2015, a legion of Bernie Sanders’ supporters rushed in to block any criticism of the Senator. But the truth is, both Senator Sanders and Martin O’Malley handled that event incorrectly. Furthermore, it was because of the criticism and the political action of BLM that both men began immediately to address the issues pertinent to BLM. Much of the ire Senator Sanders is suffering from is the result of his overzealous fans who “accidentally” allowed their latent racism to show while blocking criticisms of the Senator. Senator Sanders and his supporters are not above critique.

But you know who else is not above critique? Black Lives Matter.

One of the unofficial rules of Black Twitter is for “allies” and newcomers to “be quiet and learn; don’t lecture, listen.” The idea behind this credo is that, because allies could never experience what it is to be black, they are in no position to lecture African-Americans about their experience in America. Much like I could never tell a woman or an LGBTQ person what their experience in America is or is not, white allies are often told not lecture people-of-color about anger that was born from these experiences. I do not imagine there will ever be a critique from white America about BLM that is acceptable or that can break the impenetrable armor of “Don’t lecture; listen.” I get it.

And since my Twitter numbers aren’t large enough to warrant the faux-legitimacy that is often attributed to someone with their own legion, I decided that I would wait and listen. Besides: I’m just another guy with a blog and a podcast. 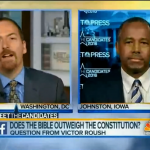 August 4, 2015
The Bible Doesn't Have Authority Over The Constitution And Here's Why That's Good News (VIDEO)
Next Post 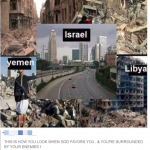 Postcards from the class & culture...
slacktivist
Related posts from God is Not a Republican