Don’t Cry for Me, Bethesda 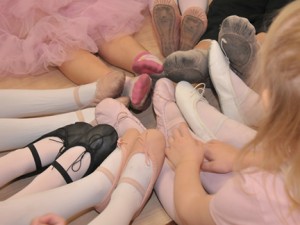 Awhile back, a well-meaning (and very successful) friend said to me, “I just wish we could buy you a house in Bethesda so you wouldn’t have to live so far away from here.”

We had been talking about our families and children, and in particular, I’d been narrating the details of my epic, every-Saturday-morning drive across the city to my daughter’s ballet class (which I wrote about for Good Letters here.)

Yep, every Saturday morning, Scott Simon on the radio, I buckled her, pink tights and braided hair, into the car seat and drove off my leafy hill, down New York Avenue, past no-tell motels and abandoned warehouses, past the lobbying shops and monuments of downtown D.C., then back up the hills of embassies and leafy trees, to the bright-pink ballet studio where second-marriage fifty-something dads consoled tutu-wearing daughters having meltdowns worthy of Maria Callas.

“What exactly are you trying to prove?” asked another friend. “There are ballet studios that are closer, and just as good.”

So far away. In the nearly eight years I have lived in Prince George’s County, Maryland, that’s the phrase I’ve probably heard more than any other, starting from before we even moved. Never mind that the community where I live is barely a mile from the District of Columbia line.

By contrast, the fabled Tyson’s Corner Mall, which many people think might as well be an extension of the city—can be a two-hour drive to the Capitol in traffic.

It did not take me long to figure out that so far away was really coded language for a number of perceived defects.

In the minds of those on the glitzy western crescent of the city (both Virginia and Maryland), Prince George’s County is where the bad public schools are—never mind that Google co-founder Sergey Brin went to Eleanor Roosevelt High School in Greenbelt, and I have any number of educator friends in the system who can attest otherwise.

But it definitely is the place where the cheap real estate is, although I know how ridiculous it sounds in the rest of the country to call a 1600 square-foot house that costs $300,000 cheap. The same place might be $550,000 on the other side of town.

Ultimately, the coded language refers more than anything else to markers of race and class. Prince George’s County’s population is sixty-five percent African-American.

It is, in fact, the wealthiest majority-African-American county in the United States, and if you drive out past the cheap real estate neighborhoods where the public defenders, union organizers, and nonprofit employees like me live, you can find mini-mansions as grand as anything out in Virginia.

When the reality of digital fraud exploded everywhere, it was our side of town where you had to put your zip code in first at the gas pump and our arteries into the city where the most traffic-cameras were installed. The local public imagination sometimes refers to Prince George’s County as Washington, D.C.’s “Ward Nine,” referring to the two poorest neighborhoods in the city, Wards Seven and Eight.

I am a white woman from the Mississippi Delta, so I have long familiarity with the legacies of racial strife and inequity. But it’s only since living here that the burdens of those cultural assumptions have fallen on me, too, along with the higher costs of car insurance.

It’s the casual disdain that smarts, and from unexpected quarters as well. Another friend (a man of impeccable liberal leanings, who was a major staffer for a Congressional Democrat) once dismissed the whole county as once having been “run by the Hell’s Angels, and now by the black version of the same.”

This used to be—and here and there, you can still observe traces—a redneck county. (For an exploration of all these dynamics, read Eddie Dean’s landmark and magnificent 1998 article for the Washington City Paper, “A Brief History of White People in Southeast.)

More than anything, though, Prince George’s is home now, and a home I love: Little brick bungalows, old trees, and a landscape that has not been mowed into concrete and big-box submission like the wealthier suburbs. I love the lonely whistle of the freight trains at night, and the old 1950s liquor stores. I love the neighbors who will let me know if my child is down the street and misbehaving.

This is, you see, a neighborhood where all kinds of people, not just nannies, are home during the day.

I’m happy to be a minority here, and I’m just as happy being part of the variegated cultural project that the county is becoming, with intermarriages and families of all kinds.

But that’s also the key, I think, to why I will keep commuting for various purposes to elsewhere: I like the ballet studio better, for sure, but it’s also true that those folks across town, the ones who don’t even know where Prince George’s County is, need to see me.

Perhaps this is my version of the “struggle for recognition” that Alexandre Kojeve noted in his Introduction to the Reading of Hegel. (And Professor David Mikics, did you ever in your life think that Kojeve would be mustered to make an argument about class and kiddie ballet? Ah, such are the uses of a liberal arts education.)

No matter: There’s a crab night at the local American Legion next Saturday night. All you can eat crabs, and beer. I need to make sure I buy my tickets. Right after I sign up my daughter for the next semester of ballet, with the fifty-something senior partner dads, at the studio all the way across town.

October 16, 2012
The Poetics of Painting: Part Two
Next Post

October 18, 2012 The Three Deadliest Words in the World: It’s a Girl
Recent Comments
10 Comments | Leave a Comment
""It doesn’t matter when you start the Sinatra Christmas playlist or put up your tree. ..."
C_Alan_Nault How to Win the War on ..."
"Yup."
Max Marvel Finding My Inner Calamity Jane
"I an confused by the use of "aural" here: "In The Gutenberg Galaxy, he explained ..."
William G II The Gutenberg Imagination
"My friend is looking for a Pepper Smith he served in the army with, was ..."
Christine Budnack The Love Song of Pepper Smith
Browse Our Archives
Follow Us!