The Eclipse of the Airport Chapel

The Eclipse of the Airport Chapel December 7, 2012 Caroline Langston 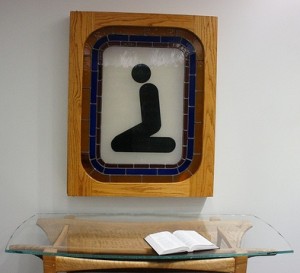 The San Francisco International Airport has a yoga room, but no chapel. At least that’s what it looked like, when I was there a couple of weeks ago at six o’clock in the morning: The Yoga Room was obviously a point of pride, with extensive signage along the concourse, but there was no indication that there might be other kinds of religious—excuse me, spiritual—spaces.

It turns out that SFO does, in fact, have a chapel, though it is tucked away in the International Terminal, and is known as “The Berman Reflection Room,” which, as an entry on IFly.com cites, “provides a center for quite self-reflection and meditation.”

Assorted photographs from Flickr, if they can be trusted, depict the space as not much different than an airport gate, with carpet, lines of chairs and window-walls of glass, plus what appears to be a vestigial Chuppah-type structure, and some potted plants. (The website for a group called the Interfaith Center at the Presidio, incidentally, laments that it was asked to raise funds for the Berman Reflection Room, but not allowed to conduct any “programming” there.)

If the cliché that all trends move eastward from California stands, then the idea of airport chapels and other incidental religious spaces would appear to be in eclipse.

Which would be too bad, for I’ve always loved sighting the airport-chapel logo out of the corner of my eye, skidding my beat-up suitcase across the concourse, and entering a hushed space of—well, exactly what?

Carpet, tidy rows of vinyl-upholstered chairs, indistinct Modernist artwork over table with a heavy old unread Bible that could have come from a funeral parlor, and the telltale compass pointing the way to Mecca.

Certainly, airport chapels never, and I mean never, cater to my own faith as an Orthodox Christian, with icons or incense. But the general airport chapel gestalt didn’t even resonate much with my beliefs before I converted, back when I was an evangelical Christian.

In the 80s and 90s, well before our national battles over pluralism became prominent, airport chapels already smacked of an earnest, non-specific Liberal Protestantism—the Protestantism of our esteemed former “liberal” Supreme Court judges, of which there are now exactly none.

And yet I loved that very non-specificity, for what it implied to me was not cheery, interfaith agreement, but passionate, personal, and often lonely fear and longing.

Inside those small spaces, with the humming of the fluorescent lights and muffled footsteps outside the door, it felt as though I were flinging my prayers out to do battle in the universe’s great silence, and that I was mystically joined with so many others, Christian or not.

In fact, praying in the ersatz chapel seemed to be a most pure form of practicing Christian faith. I dare you, whatever faith you are, to glance at the guestbook the next time you are in an airport that has a chapel, and in those pages you will find the most naked expressions of sorrow and need.

People who would crow about not darkening the door of a confessional since 1970 will scrawl an urgent, “I am so sorry. Forgive me,” in felt-tip pen across smooth white pages.

Unlike most things having to do with Washington, D.C., and thwarting the trend, the Metropolitan Washington Airports Authority does a bang-up job in its facilities at Dulles International and Reagan National, with an onsite Catholic priest and regular clergy of other faiths.

The Reagan National Airport chapel, in particular, is the one instance of a truly “open” religious space that is also truly beautiful, with glowing blond wood floors and high banquette seating around the walls that promote an atmosphere of security and calm.

Yet pluralism, the rise of the spiritual but not religious “Nones,” and the drive toward more premium retail in airports, all portend a dark future for airport chapels.

There’s a conservative Internet thread that balks to find chapels mostly serving Muslims, evidence of “creeping Sharia,” these claimants say. (But who deserted the chapels first? I want to ask. Who actually went in and took the time to pray?)

The Cleveland International Airport once housed the lavishly detailed, and explicitly Catholic Regina Caeli Chapel, with stained-glass windows and statues of Our Lady and Christ. It received constant criticism for its credal specificity, though the courts had declared its existence constitutional.

“Sadly, this unique and charming chapel was destroyed in August 2008 to make way for another mindless chain store,” noted a Flickr respondent in a caption accompanying a picture of an Easter display from years past, complete with a statue described as a smiling “Jesus Action Figure.” (Do any of you Cleveland folks know whether the contents were relocated?)

Yet I’d wager it was September 11 that spelled the general eclipse of these spaces. I recall an editorial cartoon that came out not long after the disaster, which depicted a giant (and nonspecific) Hand of God reaching down to the burning World Trade Center towers, pulling up a stairway of souls from the wreckage.

In the wake of such violence, all places became landmarks for religious practice, and religious display, and the once low-status practice of adorning car-wreck locations and murder scenes with teddy bears and bouquets of flowers became general to all of us.

“To an unknown God,” so many of them seem to say, with an intimacy that most of us find unsettling.

I remember well the faces in the thousands of photos of the lost in New York, plastered in subway stations and on telephone poles: Looking for…. Last seen Tuesday morning, 7:30 a.m. at the corner of…. Have you seen?

Icons if ever there were icons. Images of God, various and imprinted and multiple: the One in the Many, the Seed in the Ground.

December 6, 2012
Cicero and Machiavelli: Being and Seeming
Next Post

December 9, 2012 Science and the Death of Philosophy
Recent Comments
13 Comments | Leave a Comment
Browse Our Archives
get the latest from
Catholic
Sign up for our newsletter
POPULAR AT PATHEOS Catholic
1