Jesus Died for Somebody’s Sins (But Not Mine) 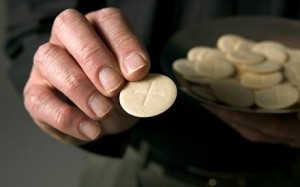 For Pastor Matt, who hopes to convert my skeptical ears to belief in bluegrass, and our new Associate Pastor Meredith, who has added intellectual hipster chic to our congregation with her PhD and her nose piercing alike. You two help make First Baptist Church in Lawrence, Kansas feel like home.

Patti Smith’s 1975 debut album, Horses, famously opens with the line, “Jesus died for somebody’s sins, but not mine.” Smith goes on to sing, “My sins my own, they belong to me, me.”

I think about this when I serve communion at church, as partaking of this sacrament is a way for believers to proclaim, “Jesus died for me—even me.” In my three years as communion coordinator, I have only seen a few people dismiss the bread or the cup. They wave their hands at the plate as if to say, “Sorry, this isn’t for me.”

Of course, that may not be what they mean at all. I cannot read minds. They may be allergic to wheat or grapes, for all I know. But if Patti Smith’s lyric speaks for them, I understand. Doubt, disbelief, and disillusionment with the church are rampant, and for many good reasons.

My wife Becki and I prepare the Lord’s Supper the first Sunday of every month at our church. Before the Lenten season in 2012, when I opened the cabinet that held the fingerprint-smudged brass plates we use to serve communion, the dullness of the duty threatened to drown out my devotion.

Sorry God, I thought, but this isn’t for me.

It seemed to me that a robot could do my job. Then I remembered: Robots do fill communion cups—well, sort of.

Anyone who has seen Steve Taylor’s filmic adaptation of Donald Miller’s Blue Like Jazz has seen the factory where pre-filled communion cups are mass produced to save schlubs like me from the monotony of filling infernally small cups with Welch’s finest. Churches can actually order these cups.

I wondered if my pastor knew about them—if my church could order them.

Even more than preparing the plates for the service, however, I dreaded enlisting people to help serve the sacrament. When I asked, they looked at me as if they would rather stand in front of a firing squad than pass the plates from pew to pew. To this day, I serve communion every month to avoid asking a sixth person to help to me distribute the body and blood.

As Lent approached in 2012, committees met to determine what worship would look like during the church’s observance of this liturgical tradition. Someone thought Becki and I should prepare and serve communion every week during the season of bright sadness instead of only once a month as we normally do. We would have protested, but as first-time parents to a four-month-old, I think we were too sleep deprived to offer much resistance.

By the time Lent arrived, I knew Becki needed rest more than I needed her to assist with communion. After seeing her place a box of Raisin Bran in the refrigerator and realizing she would probably put the milk in the cupboard if I failed to intervene, I figured she might accidentally sabotage the Lord’s Supper, too. I decided to handle Lenten communion alone.

I expected to merely endure this duty for six consecutive weeks. As I passed the plates each week, however, I began to take notice of the people who partook of the bread and the cup. I focused less on the tedium and more on the people who occupied the pews—their faces and hands humanizing an otherwise humdrum happening.

As I watched the people pass the plate, I thought of their names in my mind if I knew them. If I appreciated someone’s dedication or their sense of humor, I told God so.

“Jesus died for somebody’s sins,” Patti Smith sang. As I passed the plates, I realized that each person in the pew was a “somebody” in this sense. I realized I could endure and even enjoy communion because I was preparing it and serving it for people I loved—for people God loved, too.

People like Caleb—the son of our friends Jim and Melisa. With mischief in his eyes, he tears off a Herculean hunk of bread where others opt for crumbs.

People like Emily and Troy, whose son Matthew was diagnosed with adrenoleukodystrophy last year. Matthew takes Lorenzo’s Oil now, and draws pictures of the myriad monsters that inhabit “Matthewland” during the church service. He is the most creative child I know, and his church family loves him dearly.

People like JoAn, who became a widow a few years ago. When her husband Dick was on his deathbed, Becki and I visited them in the hospital. Dick set records in cross country at the University of Kansas in the early 1950s. When he lay at the threshold of eternity, his friends said, “You just run to Jesus, Dick. Run to Jesus.”

Jesus died for these wonderful somebodies. As Lent approaches in 2013, I plan to celebrate these somebodies again as Becki and I prepare and serve communion, even though we will not do so every Sunday.

A final thought: I have only seen a few people refrain from taking communion. Whatever their reasons for doing so, I always hear the voice of Patti Smith singing, “Jesus died for somebody’s sins, but not mine.”

But I have also seen children and members of the youth group creep into the kitchen after the service to eat the leftovers of the Lord’s Supper. I can only hope these gluttons of grace will overflow with God’s love, spilling it into the lives of those who would normally refuse it, and allowing them to taste and see that the Lord is good; allowing them to say, “Jesus died for somebody’s sins, and perhaps I am one of those beloved somebodies.”

February 8, 2013
The Little Sisters of the Poor: Religious Conscience and Government Mandates
Next Post