A Story About the Horrible Glorious Truth 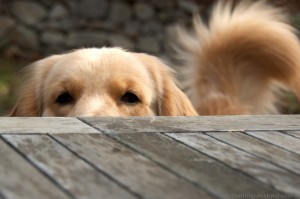 I want to write a beautiful story.

I want my reader to cry when the story has ended, not from sadness, but because she wished the story could continue. I want her to wish for a sequel, but at the same time to feel the story was complete.

I want my characters to be noble, and then ignoble, and then truly noble after all: the kind of characters that learn from their mistakes and then go on to be heroes. I want a full-blown, victorious, everything-becomes-right-again-at-the-end story where characters fall in love with the right people, without being contrived.

I want the book to have a happy ending.

And I don’t want to write this book simply so that I can be the one who wrote it. I want to write it because I’m looking for this story in real life.

I started feeling this way a little over a year ago when my dog died. I knew that this was not a tragedy on a large scale. And I knew that many people would consider my grief for my dog to be childish.

It seems fitting then, that afterward I couldn’t read anything except The Jesus Storybook Bible, a paraphrase for children whose account of Revelation goes like this:

There are loud cheers and clapping, clapping and bright laughter like a thousand waterfalls and everyone bursts out singing a new song.…

I see a sparkling city shimmering in the sky: glittering, glowing—coming down! From heaven. And from the sky. Heaven is coming down to earth!

Lately, I want this to be every story I read, because it’s hard to have faith like a child whilst living in the adult world of painful wit and irony. It feels shameful to wish for a city made of jewels, shining on the plain.

It’s as if I believe that I’m only allowed to ask God for a safe house rather than a heavenly home.

Maybe it’s childish, but the death of my dog drove me to a new search for meaning.

It’s the question people have about God when their eyes are opened to the terror of the world. If he exists, why do bad things happen?

We tell ourselves that his story can’t be true because of all the other truths that surround us. Famine abounds. Cancer kills. War runs rampant. And we can’t comprehend how these truths can exist alongside golden cities where the sun never sets.

The Jesus Storybook Bible is new to me, but there’s another children’s story I’ve kept near for a long time; a story that helps me put evil next to good and still believe that good will win. It’s a story where a foolish character stands up to a savvy and sophisticated witch.

Suppose we have only dreamed, or made up, all those things—trees and grass and sun and moon and stars and Aslan himself…in that case, the made-up things seem a good deal more important than the real ones. Suppose this black pit of a kingdom of yours is the only world. Well, it strikes me as a pretty poor one…. We’re just babies making up a game, if you’re right. But four babies playing a game can make a play-world which licks your real world hollow. (C.S. Lewis, The Silver Chair)

I felt like such a baby crying over my dog. But I need to be a baby—not a baby who denies the terrible truths of this world, but the child C.S. Lewis describes, who sees what’s around her and still believes her play-world licks this real world.

That’s probably why I write fiction. It’s definitely the reason I read it. Because when we’re oppressed by the truth of evil, it’s hard to accept the truth of good.

Stories help me pair the horrible truth alongside the glorious one. They help me to remember that the glorious truth came first, and will win—that one good guy is real.

Where is the sun? Where is the moon? They aren’t needed anymore.… No more darkness! No more night!

And then a deep, beautiful voice that sounded like thunder in the sky says, “Look, I am making everything new!”

This is the story, our story. I don’t own the rights to it—maybe you will paint it or sew it or grow it into being. I will try to write it, because that is what I do.

The play world is real, and the city is gorgeous.

March 27, 2013 How to Visit a Grave
Recent Comments
3 Comments | Leave a Comment
Browse Our Archives
Follow Us!