The Last Taboo in Hollywood 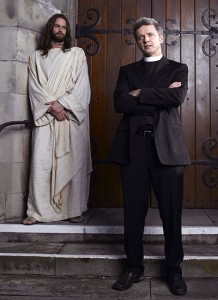 Ask my wife: I’ve been known to be a sucker for some fairly wooden programming on the likes of A&E, National Geographic, and the History Channel when they turn their attention to the Bible.

Proof of Noah’s Ark on Mt. Ararat? I’m in. The revolt at Masada? Fire up the popcorn.

If it’s possible to make a disclaimer, it would be that at least these programs—or at least the ones for which I have a soft spot—have been more in the documentary than dramatic vein, featuring noted scholars and talking heads over bad actors and talking godheads.

Reenactments in their basic cable mold tend to send me running for the hills of Judea.

That said, I’m a screenwriter who would love nothing more than to bring certain stories from the Scriptures to life on the big screen, in ways that would do justice rather than pay mere lip service to the source material’s epic complexity.

So with both curiosity and dread I tuned in to the recent premiere of The Bible, a ten-part dramatic miniseries on the History Channel produced by Mark Burnett, the force behind such artificial juggernauts of reality TV as Survivor, The Apprentice, and The Voice.

I guess one could argue there are plenty of survivors, apprentices, and cantors in the Bible to suggest that Burnett would be perfect for the job.

But I had my doubts.

Sure enough, they were affirmed so fully and immediately that I had to change channels after twenty minutes. By the time we got to Abraham I was ready for the Crucifixion. Here was Abraham, something of a middle-aged patient in a one-man desert nursing home with no walls, wandering about repeating to Sara and Lot that he had heard from God.

No wonder Sara couldn’t conceive a child for him: the body knows best.

Perhaps it was unfair of me to write off the entire series based on those twenty minutes alone, but the prevailing critical consensus only assured me that my initial disappointment might devolve into rage.

Not that any such consensus had the slightest effect upon the show’s ratings, which drew a whopping 13.1 million viewers for the premiere.

While that’s good news for advertisers, it may not bode well for those of us who, like James Poniewozik of Time, lament what the project’s success likely will and will not spawn: “So we may see more TV for religious believers as a result of The Bible. What I’d love to see—but am not so sure we will—is more TV about religious believers.”

He doesn’t mean specifically or only Christian believers, of course, but for my purposes here the C-word in Hollywood apparently stands for this faith tradition more than anything anatomical, Christian characters being perhaps the last taboo after all of the industry’s self-congratulatory progress in portraying women, minorities, and gays.

Quick: Name a memorable Christian character in recent TV or film—say the past thirty years—who wasn’t either a loser or a wing-nut, a despicable charlatan or a pathetic saint, but a likeable and, yes, flawed character, and one whose central flaw wasn’t his or her faith.

If you can name one, can you name two or three?

Poniewozik lauds Friday Night Lights for treating faith seriously, and, most importantly in my opinion, matter-of-factly. It was simply part of the picture, not a freak brushstroke on an otherwise relatable canvas.

He also cites The Good Wife for its brave pairing of the openly atheistic main character played by Julianna Margulies with a teenage daughter who turns to Christianity.

There have been other such exceptions to the rule, including Aaron Sorkin’s ill-fated Studio 60 on The Sunset Strip in 2006, which featured not only a born-again Christian character, but a funny one at that! That her quick wit was meant to be surprising, though, only betrayed the (general) underlying prejudice: Christians, especially those of the born-again stripe, aren’t funny, or even particularly enjoyable.

That same year there was the short-lived The Book of Daniel whose main character was an Episcopal priest addicted to painkillers with an alcoholic wife, a gay son, and visions of a very white Jesus in a very white robe whose conventional appearance was countered by his challenge to conventional dogma.

I never saw the show, one reason being it only lasted four episodes due to the beating that it took from the Christian Right. Surprise, surprise. I had my own problems with the premise, which was that its overt appeal to controversy right out the gate felt not only like an apology for its main character being a priest, but worse, like a surefire way to shoot not only itself in the foot, but any more measured efforts that might follow in its wake.

The power play made by the Christian Right with the show’s advertising base speaks to a larger accountability for the persistent taboo in Hollywood. For many, anything not Touched by an Angel must be touched by a devil if it features an unsanitary portrayal of seekers and believers.

Since I’m a provider of screen content as well as a consumer, perhaps it’s best that I let someone else finish the crucial argument on my behalf. Again, Poniewozik:

Religious faith (or the passionate lack thereof) plays a huge role in billions of people’s lives. Primetime TV, however, has a habit of dealing with faithful characters badly or—more often—not at all. And more widely, TV characters are simply—nothing. They’re not unreligious, necessarily, but their faith, if any, is somewhere offscreen…

Some taboos are in place for good reason. This isn’t one of them. I hope to see it broken in my lifetime, and perhaps help the cause.

March 26, 2013 A Story About the Horrible Glorious Truth
Recent Comments
20 Comments | Leave a Comment
Browse Our Archives
get the latest from
Catholic
Sign up for our newsletter
POPULAR AT PATHEOS Catholic
1