We Are Not Forsaken 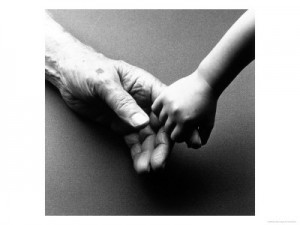 My daughter’s teeth were clenched from the brain tumor and so I would hold her for hours and dribble protein drink through their crevices with a thin-rimmed yellow sippy cup. Most would spill out, but some went in, and so this is how we stretched out her life.

To what end I am unsure, beyond suffering. When it is your child you have no choice, you can no more let her die than cut your own throat.

Sometimes when I fed her I raged silently at God for twisting a three-year-old into this vessel of pain. Other times I prayed for him to heal her. “Let this cup pass,” I would pray, lifting that thin yellow receptacle with the tooth-grazed rim to her lips.

In the afternoons my wife took over, and I sat in our living room and tried to eat. Mostly I looked out our window at the blazing Kansas summer. I watched people pass on bicycles, watched them drive past with music playing. Sometimes through an open car window I heard them laughing.

They didn’t know they were passing this dying house. I hated them for not knowing.

There are good and God-loving people who have never once felt his absence. There are also God-yearning people who have lain awake more nights than they can count, wondering why they are forsaken. I can’t discern whether the difference is due to an inner defect, or a mysterious ordainment by God, or simply damnation.

Maybe there is something wrong with some of us, for all we who have felt forsaken are broken as well. But isn’t everyone broken? This world is broken. Some of us it cracks, others it shatters, but no one passes unscathed.

A year after she died, I met a man who had recently lost his baby to the same disease. We talked briefly and then he burst into tears. He told me what he saw and heard and smelled when she died, because he knew that I knew, and so it was safe to say these terrible things, these things you can only know after you have watched the light leave your baby’s eyes even as she strains to see you.

There is a comfort in being near someone who knows.

I shivered as he related these truths to me, the same way I once shivered when I read, as a boy, that dread cry of Christ: Eli, Eli, lama sabachthani? It is his point of greatest anguish, when he squints into the voiceless dark and knows Godforsakenness.

It is a great mystery to me, how God can know what it means to be forsaken, and because he is three-in-one, know also how it is to look on your dying child, hear the breath rattle in his deflating lungs, smell the shit running down his legs, see him strain to find your face, the only sight that will comfort him, your face, which is denied him in this moment of greatest need, because his eyes and this darkening world itself have failed him.

After my daughter died, people tried to comfort me by pointing to the fruits of her suffering. My own mother came to faith, she said, in the funeral home. My pastor took my mother into a side room and when she came out she wept and told me she’d accepted Christ as her savior. So much good, people said. Your daughter accomplished so much through her suffering.

I suppose that fruit is good but this is not a deal I would have made. I am weak and I miss her and you’d think a hole running through you would be light as air but it’s such a heavy load sometimes.

Why did he do this? What are we to him, that he would do this?

Good Friday, in the Christian faith, is the day our sins were put to death. An icon from the early Church shows Christ in Hades, pulling up Adam and Eve. He is “trampling down death by death,” goes the ancient liturgy, “and upon those in the tomb, bestowing life.”

He offers life and he offers forgiveness and he knows this present suffering. He knows what it is to watch his child die. He knows what Godforsakenness feels like.

Most important, even as he showed us, with his famous cry, that he knows this feeling, he told us it was a lie. “My God, My God,” goes the Psalm 22 (21 for Eastern Orthodox Christians), “hear me, why have you forsaken me?” This is the anguish all we of Godforsaken heart know well.

But hear the revelation to which Christ directs us, further in the same psalm:

For He has not despised nor scorned the beggar’s supplication,

Nor has He turned away His face from me;

And when I cried out to Him, He heard me.

He hears us, and he knows, because he has suffered as one Godforsaken. Which means that you and I, even in our darkest hours, are not forsaken. Though we may hear nothing, feel nothing, believe nothing, we are not forsaken, and so we need not despair. And that is everything. That is Good Friday and it is hope, it is life in this darkened age, and it is the life of the world to come.

April 1, 2013 If Necessary, Use Words
Recent Comments
21 Comments | Leave a Comment
"I miss that dragon the most finally it's here. 😳IJ.636PX.CO/c7234i"
Dmaned11123 Poetry Friday: “The Burned Butterfly”
"Ah, so now the imaginary War on Xmas is transmogrified into The War on Santa, ..."
David Miller How to Win the War on ..."
""Aural" refers to hearing, "visual" to seeing"
merphd The Gutenberg Imagination
""It doesn’t matter when you start the Sinatra Christmas playlist or put up your tree. ..."
C_Alan_Nault How to Win the War on ..."
Browse Our Archives
Related posts from Good Letters