Deliver Us from Evil 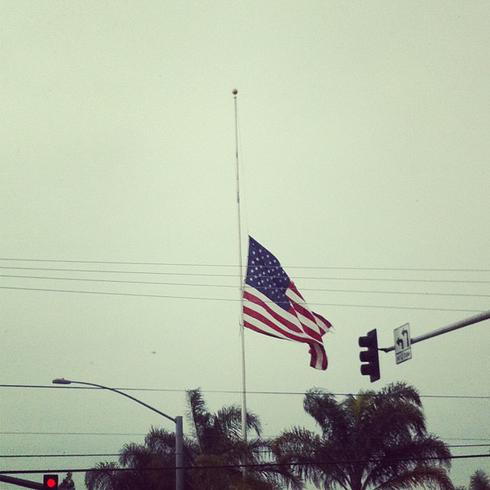 The day after the massacre at Sandy Hook elementary school in Newtown, Connecticut, I sat myself down and considered my role in the tragedy. Now bombs have exploded in Boston and I’m asking myself the same question.

Of course no bomb was built in my kitchen and no gun was loaded under my roof, but could I have done something to help stop either of those events?

I’m thinking back years ago to a crisis in the church where my husband and I were members. A leader had fallen. The congregation gathered one evening to figure out why things had gone so wrong and what we could do about it. Fingers pointed, heads shook. Then Crystal spoke up. A woman in her late eighties, hunched over from osteoporosis, she had lived a life full of good work, particularly among international students.

Crystal teaches me. I want to raise my hand to share the blame. Then. Now.

I consider myself a pray-er, but unless there has been a recent breakthrough of evil as in Sandy Hook, as in Boston, the protection of this country from evil is not often a petition in my routine daily prayers, so occupied am I with carrying the concerns of my own family, friends, and immediate community.

I’m asking myself what role my neglect of such prayers has in the breakthrough of evil in Newtown and on Boylston Street?

The prayers of men and women in cloisters and sanctuaries and private prayer closets who don’t neglect their larger corporate role envelop the world like a blanket, sustaining the security of strangers to an extent we’ll never know. Maybe it doesn’t matter that my prayers are missing, but maybe it does.

Multiply my neglect of prayer for corporate protection by that of thousands or millions of others like me who also have every good intention of praying these prayers but are similarly distracted, and this cumulative neglect may indeed matter very much.

In the world of infectious disease, there is a concept called “breakthrough” infection. It works like this: a person is taking medicine for a viral or bacterial infection and responding well, but then the infection returns even while the medicine is being taken. For some reason, the medicine is no longer potent enough to continue to suppress the pathogen. Oftentimes, the treatment failure is because the person missed some doses.

Is there a daily or minute-by-minute dose of individual and corporate prayer that must be offered up, matched to the evil that is stirring, in order to keep that evil suppressed? Could you plot on the X-axis the cumulative prayers of the people and on the Y-axis the breakthrough of evil, proving an inverse relationship?

I think of Moses and how his friends had to keep holding up his arms in order for the battle to won.

Sir Rev. Dr. John Polkinghorne, a physicist and Anglican priest, likened prayer to a laser when I heard him speak years ago. It’s powerful because the troughs and peaks of its light waves line up and add together. In the same way, prayer is a vehicle by which a person’s will is added to God’s will and the will of others who are of the same mind and prayer in a contribution of actual energy and power.

The alignment of our will with God’s matters, not simply as a measure of our love or devotion to him, but as a force that helps his will in the world be accomplished.

How all this works is a mystery to me: How good and evil battle. How prayers intervene. I only know that our prayer is built into the system of how history plays out, personal and corporate. Somehow it matters. But my neglect of these big prayers suggests I either don’t believe this or don’t care. I need to change.

I can’t conduct firearm background checks or develop policies for mental health or stand guard at every public corner, but I can pray. Every day.

Another confession: I came to this realization even after Sandy Hook, but my intention was short-lived, busy as the days were, with of all things Christmas readying. I need to make the change stick.

I’ve set the alarm on my phone to go off thirty minutes after I usually get up. It’s set to repeat daily. When it goes off with its blues guitar sound, I am praying for the safety of this country, our schools, skies, and public places, for the safety of the world, for protection of the innocents.

I’m imagining a wave of similar alarms going off, prayers rising, east coast to west, one time zone tripping into the next as the nation wakes up, like the body wave that encircles a stadium when men and women, boys and girls, sequentially stand with arms raised. Deliver us from evil.

Will you also set your alarm?

Nancy Nordenson is the author of Just Think: Nourish Your Mind to Feed Your Soul (Baker). Her essays have appeared or are forthcoming in Harvard Divinity Bulletin, Indiana Review, Comment, Under the Sun, Relief, and other publications as well as several anthologies. She is a graduate of Seattle Pacific’s Master of Fine Arts in Creative Writing program and lives in Minneapolis, where she works as a freelance medical writer. Find her online at www.nancynordenson.com.

May 15, 2013 A Corporal Work of Mercy
Recent Comments
13 Comments | Leave a Comment
Browse Our Archives
Related posts from Good Letters