Antisuperchrist: How the Man of Steel Saves, Part 1 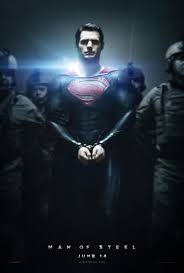 We may have taken Jesus out of our schools, but from May to September, you can find him at Regal Cinemas 13.

It’s hard to find a movie from the past few summers that isn’t an HD variation on the Passion, whether we’re dealing with Harry Potter’s death and resurrection, Bruce Wayne’s dalliance with the ultimate sacrifice, or Captain Kirk’s own saintly renunciation. Of late our boy wizards and starship captains have practically surged into battle with WWJD bracelets girdling their well-toned arms.

Into this pantheon of million-dollar Jungian archetypes careens the original Pop Messiah, faster than a speeding bullet. Man of Steel, the latest reinvention of Superman, eschews red underpants while preserving the character’s longstanding Christological subtext, thereby offering Warner Bros. an opportunity to pitch an ad campaign at evangelical pastors.

But closer inspection reveals a more complicated message than the Warner Bros. marketing department may want to admit. Piling still more philosophical and theological significance onto an already over-determined icon, Man of Steel winds up allegorizing Christianity’s agon with both its Classical predecessor and its Nietzschean inversion. By extension, this both aestheticizes and deconstructs America’s national mythology.

Certainly, for the first third of the film, Man of Steel reads as a pop Gospel account, depicting the young Clark as a miracle child struggling to find his purpose under the guidance of Mary and Joseph—er, Martha and Jonathan Kent.

As played by Kevin Costner, Jonathan Kent is a reticent and paranoid father, whose concern for his son’s anonymity leads him to suggest that Clark “maybe” should have let a busload of school children drown. While “maybe” is hardly the answer one expects from Superman’s moral compass, this implicit emphasis on choice echoes the fact that Clark’s very birth, in this version of his story, constituted a kind of incarnation of free will.

As Clark discovers in a tête-à-tête with a hologram of Jor-El, his “heavenly” father, late Kryptonian society was nothing less than the sort of stratified regime envisioned in Plato’s Republic. Mass-produced in an underwater chamber, Kryptonians were bred into pre-decided classes, whether warrior, guardian or producer. (In a sly allusion, Clark is later glimpsed reading Plato on the Kent farm, a rather cheeky affront to The Republic’s fastidious separation of philosophical and agricultural classes.)

Jor-El oversaw Krypton’s first natural birth in centuries—“heresy,” as Zod intones. Indeed, Jor-El’s programmed lecture to his son rehearses Christianity’s “heretical” break from classical fatalism, its revolutionary prioritization of the individual conscience over the dictates of Fate. Revealing that Kal-El’s birth reintroduced choice into a determinist dystopia, Jor-El declares that, on earth, Clark can prevent human society from devolving into Plato’s polis.

Teaching the earthlings not to repeat Krypton’s mistakes, Kal-El will help found nothing less than Augustine’s city of justice, in which the soul’s personal apprehension of the Good, rather than the requirements of caste or fiat, compels each citizen to act justly.

“In time, you will help them accomplish wonders,” Jor-El declares, in a vaguely British accent Crowe might have honed in Gladiator. This valorization of individual agency, over and against the soul-crushing dictates of a tyranny defined by social stratification, is nothing if not the American origin myth. Ever since John Winthrop envisioned the Massachussetts Bay colony as a “city on a hill,” the notion of a republic whose citizens choose righteousness has exerted a powerful pull on the American imagination.

The genesis of the Superman character himself, of course, owes to the idealism of creators Joe Shuster and Jerry Siegel, American Jews of Eastern European stock who romanticized the outsider’s potential to rejuvenate the dream of the just city. Leave it to the alien to remind us of our inalienable rights.

Yet Jor-El’s declaration of independence doesn’t altogether leave the Empire behind, since he has also described Krypton’s empire, in its bygone phase of interstellar colonization, as “accomplishing wonders.” The echo suggests a double destiny for the Last Son of Krypton: even as his very existence serves to blaspheme Kryptonian ideals, his success on Earth constitutes the ultimate “wonder” produced by Krypton, securing the immortality of his race where millennia of empire-building could not.

Kal-El’s complex relationship to Kryptonian political ideology translates into a correspondingly ambivalent brand of messianism on earth. For in guiding humanity towards the city on a hill, Superman must first establish his total Otherness to humanity’s physical, legal, and even ethical constraints.

Witness the juxtaposition, halfway into the film, between Clark’s consultation with a priest and the virtual theophany that immediately follows.

In one scene, Clark could be a refugee from a Terrence Malick film, a morally confused Midwestern everyman seeking counsel from a clergyman; in the next scene, he’s all folded arms and fluttering cape, hovering before an astounded panoply of military and government types who find themselves shocked and awed. “I’ll only speak to Lois Lane,” Superman intones, continuing the Olympian tradition of consorting exclusively with the daughters of men. Hera’s wrath springs eternal.

In other words, Man of Steel’s star-spangled manners can’t entirely obscure the character’s affiliation with another philosophical archetype—neither Plato’s Republic nor Augustine’s City of God, but Nietzsche’s Overman (Übermensch). At the end of his speech, Jor-El exhorts his son to “keep testing his limits.” In his subsequent flying jaunt through Africa and Alaska, Superman achieves a stratospheric superiority that literalizes the Overman’s fabled superiority to the masses.

Of course, as much creative latitude as producer Christopher Nolan possessed, no one was going to watch a reboot in which Clark Kent kept his five o’clock shadow and battled Zod in Birkenstocks. Yet Clark’s metamorphosis into caped superhero is framed as a transformation into a being totally indifferent to the constraints that govern ordinary human existence, a being who allows himself to be handcuffed only to show how swiftly he can break those cuffs.

In tomorrow’s post, I’ll offer some thoughts on how Superman attempts to straddle the line between Overman and Son of Man.

Lucas Kwong is a doctoral candidate in English Literature at Columbia University, specializing in religion and late Victorian literature.  When he isn’t writing about Dracula or obsessing over the ideological underpinnings of summer movies, he’s writing music and performing as part of garage rock act Brother K (brotherkmusic.com).