On Plumber’s Block and the Birth Process, Part 1 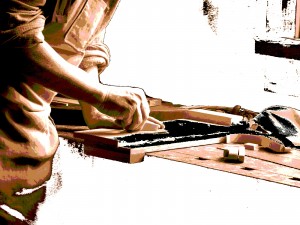 If you are reading this and thinking to yourself, “Hear, hear! Well said, Mr. Famous Irish Writer,” then just know before I proceed that I see where you are coming from and am not wholly unsympathetic. But I submit, as a thoroughly un-famous American writer, that perhaps it’s more complicated than that, not the least because I actually know some plumbers and there is absolutely such a thing as plumber’s block.

Allow me to illustrate.

My husband has known how to re-grout tile since he was about five or six years old. He’s been shown how to use tools, how to take things apart and put them back together. He’s wholly unafraid of saws and drills and blowtorches and all other terrifying manner of items handy. He’s just always been around and used those things.

However, this year marks the first time that Ben has been required to make his primary living from full-time employment working as part of a remodeling team under a licensed contractor. The licensed contractor has over thirty years experience. As of the time of this writing, Ben has less than nine months.

Unfortunately, something sinister (and I tend to suspect it stems from his Scandinavian Midwestern-ness) within Ben’s DNA leads him to believe that despite their twenty-nine year differential, he is supposed to be just as skilled, knowledgeable, resilient, and efficient as his boss—every day, without fail, regardless of how well he’s slept or eaten or if he’s feeling well or if he’s stressed out or distracted.

If successful, he walks in the door and it’s like a refreshing sea breeze has entered the apartment. His ebullience is infectious and unflappable. He’s like a giddy child covered in drywall dust, all but dancing a jig as he enters the place. If however, he feels as though he’s failed, he walks in literally downcast—polite but distracted.

And I can predict with some degree of certainty that later that evening, he will say something like, “You know? I’m just not sure how much longer I can keep doing this remodeling thing. I’m just not sure.” And then the localized infection turns global, and he begins wondering where he went wrong back in the past, and he turns inward and begins castigating himself for all other sorts of failures, real or imagined, and suffice it to say it’s a grim night in the Lundquist household.

Sound familiar, writers and artists? Anyone?

So, Mr. Famous Irish Writer, I have learned from experience that people who work with their hands each day, so that the rest of us will have toilets and lights and walls, feel just as exposed and vulnerable and dejected when an item they’ve installed doesn’t work correctly as any writer who gets yet another rejection slip.

And when that dejection, over failures actual or imagined, transitions into a kind of rigor mortis, then you can guarantee that the resulting feelings of being blocked—the creative incapacitation, the fear of continued exposure, the desire simply to quit and then to hide—are quite similar.

I am five months pregnant. Reading literature about the process of labor and birth has led me to view writer’s block (as well as a whole other kind of plumber’s block) from quite a different perspective. Specifically, reading the work of Ina May Gaskin, perhaps the nation’s most prominent midwife, has led me to re-envision how blocks function.

Delicate readers, pardon me here. Grab your smelling salts. But one of Ina May’s signature arguments about birth revolves around a principle she calls sphincter law, which essentially states that the parts of the human body that are designed to open and close perform optimally only under fairly specific circumstances. She writes:

Sphincters function best in an atmosphere of intimacy and privacy—for example, a bathroom with a locking door or a bedroom, where interruption is unlikely or impossible. These sphincters cannot be opened at will and do not respond well to commands (such as ‘Push!’ or ‘Relax!’). When a person’s sphincter is in the process of opening, it may suddenly close down if that person becomes upset, frightened, humiliated, or self-conscious. Why? High levels of adrenaline in the bloodstream do not favor (sometimes, they actually prevent) the opening of sphincters.

Just ask a man what happens in a formerly empty row of urinals when another man walks in and blithely chooses the urinal right next to his. Just ask my husband what happens when the person who has chosen a $10,000 block of marble for their kitchen countertop stands behind him and watches him while he cuts and polishes it.

Is it possible then, that the writer’s brain, or the plumber’s brain for that matter, may not function so wholly differently from other parts of our body designed to open and close? Is it possible that what we long to give birth to may be so frequently forestalled not simply by lack of desire or discipline but by something deeper and harder to access?

But Kelly, you may point out, writers do write in an atmosphere of intimacy and privacy. Ah, but do they? Are we really alone when we close the door to our writing closets and begin to write?

My answer to that and many other questions I will address in tomorrow’s continuation of this post.

Kelly Foster, a former Good Letters blogger, is Image’s 2012-2013 Milton Fellow. Kelly is a native Southerner, and graduate of SPU’s MFA in Creative Writing program. She has taught writing and literature courses across the country. Her creative nonfiction manuscript is titled Boystown Blues.

June 19, 2013 On Plumber’s Block and the Birth Process, Part 2
Recent Comments
6 Comments | Leave a Comment
""It doesn’t matter when you start the Sinatra Christmas playlist or put up your tree. ..."
C_Alan_Nault How to Win the War on ..."
"Yup."
Max Marvel Finding My Inner Calamity Jane
"I an confused by the use of "aural" here: "In The Gutenberg Galaxy, he explained ..."
William G II The Gutenberg Imagination
"My friend is looking for a Pepper Smith he served in the army with, was ..."
Christine Budnack The Love Song of Pepper Smith
Browse Our Archives
Follow Us!