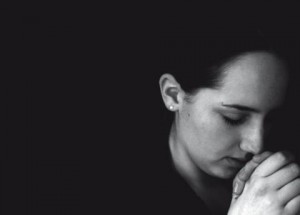 I had a problem with prayer. It’s not that I didn’t think of God or talk to him; I did every single day. But I didn’t understand what made me do it, didn’t know what it accomplished, wasn’t sure what I was doing was prayer.

You see, I just can’t pray as Sister Clare taught us kids in Catechism. I don’t say formal prayers except at Mass—not the Confiteor, not the Our Father, not the Hail Mary—and even then I don’t actually say them; instead, I listen to the congregation’s voices, straining to focus on the words.

And I can’t pray like my Lutheran colleague Laura, who asks the people in our office to hold hands and spins extemporaneous prayers whenever one of us is ailing—Dear Lord, healer of the sick, we turn to you as our friend John faces knee surgery. When she does this, I lose her thread almost from the start, so urgent is my need to drop my neighbors’ palms.

Nor can I pray like my old friend Fran, who at all times carries a binder, each page with a scripted prayer meant for a particular person, addressed to a specific saint, repeated several times each day—O glorious St. Joseph, faithful follower of Jesus Christ, to you do we raise our hearts and hands to implore your powerful intercession on behalf of Tom. Whenever she asks me to join her, my mouth iterates the words, but my mind remains unengaged and my eyes seek the bottom of the page.

And while experience had made it clear that public prayers composed by others didn’t work for me (especially while holding hands), I wasn’t any more successful praying my own words privately.

Every single night from age five to fifty, I’d turned off the lights, climbed into bed, closed my eyes, curled up like a fetus, mumbled a personal prayer—Dear God, thank you for today, for the compliment Bill gave me at work, for the avocado sandwich and companionship I shared with Dave at lunch. But before I’d get much further I’d be ruminating some incident that had happened during the day or running through my checklist for the next one.

I often wondered why I even tried to pray: What was the point? While I certainly thought it proper to thank God for blessings—health, home, family, friends—and apologize for failings—envy, anger, petulance, pride—I thought it selfish to ask him for favors—a slimmer body, a better job, a bigger house.

With six billion people on a planet rife with poverty, violence, disease, who was I to ask for anything? And then, when it came right down to it, I couldn’t believe, as Clare, Laura, and Fran did, that God responded to petitions. The Holocaust, Viet Nam, 9/11, Darfur, Katrina. Was no one praying then?

I was a failure at prayer.

And it bothered me.

So I met with Fr. Boniface, a priest at the Catholic church I go to, to ask him what I was doing wrong.

He said: “What you do isn’t what matters. Think about what prayer is. It’s a conversation with God. It’s about entering into a relationship with him. When we converse with people, we come to know them, and that takes time. It’s the same with God. Prayer is about falling in love with God, being close to him, now and in eternity.”

Prayer, a relationship with God? It was a concept I’d heard before, mostly from Protestant students at the Christian college where I teach. When one student, Hannah, wrote of her personal relationship with Jesus, I’d pictured him in blue jeans, sitting on her shoulder, strumming a guitar, singing love songs in her ear. How strange.

Still, while part of me thought this picture crazy, another burned with jealousy. Jesus was right there for Hannah. Where was God for me?

I, like most people of the Judeo-Christian tradition, had been taught that God is omnipresent. He is everywhere. But omnipresence is difficult to fathom. Perhaps my problem with prayer was I couldn’t sense God’s presence when I prayed. Presence is crucial to relationships. Absence causes love to fade away.

So I read about Divine presence. The transcendent view stresses the otherness of God: He’s above the clouds, beyond the stars, not in the material world. And I realized scripted prayers placed God out there for me—too far to sense his presence, too distant for relationship.

The immanent view sees God within all parts of creation:  He’s in every object, element, animal, plant and person—including me. And I realized my improvised bedtime prayers placed God within myself—so close he dissolved into my substance, too indistinct for relationship.

Yet I knew, absolutely, that I had felt God’s presence in my life. I’d catch my breath at a tangerine sunrise and whisper, “Thank you, God,” then be moved to smile at everyone I passed along the street. Or I’d be startled by an ambulance siren and think, God, please let that person live, then be prompted to write to my aunt who’d had a heart condition for years. Or I’d shriek when my daughter burned a skillet and wince thinking, God, why am I so testy?, then be spurred to take my daughter out to lunch.

So while I can’t sense Divine presence beyond the clouds or within me, I feel God close, and clearly, in unexpected moments like these—moments of awe, joy, fear, sorrow, or contrition. God captures my attention in these moments. I cry in recognition, feel a surge of heart. I respond with acts of love, often in spite of myself.

Are these exchanges conversations?  I’d like to think yes. Thus, they’re no less prayers than the kinds I struggle with.

June 26, 2013 The Fragrance of the Unknown, Part 1
Recent Comments
1 Comment | Leave a Comment
""It doesn’t matter when you start the Sinatra Christmas playlist or put up your tree. ..."
C_Alan_Nault How to Win the War on ..."
"Yup."
Max Marvel Finding My Inner Calamity Jane
"I an confused by the use of "aural" here: "In The Gutenberg Galaxy, he explained ..."
William G II The Gutenberg Imagination
"My friend is looking for a Pepper Smith he served in the army with, was ..."
Christine Budnack The Love Song of Pepper Smith
Browse Our Archives
get the latest from
Catholic
Sign up for our newsletter
POPULAR AT PATHEOS Catholic
1