Sisyphus with a Lawnmower 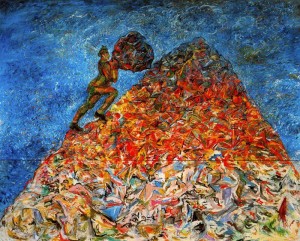 I hate mowing the lawn. I hate lawnmowers.

Our unkempt yard stands out among our neighbors’ lush green lawns. Their leaves and sticks are promptly removed after storms, their yards are neatly mown, and their borders are crisply edged. My wife and I imagine that we get a pass on our shaggy, limb-cluttered yard because everyone knows we’re academics, bookish types who aren’t much use at real work—otherwise we might have already been voted off the street.

I don’t see the point of constantly struggling against nature when she will certainly outlast me. What’s more, I like my yard shaded and shaggy, with leaves and sticks all around. It feels more natural—it is more natural. Why put so much energy into fighting it?

We have family coming this weekend though, and my wife wants things clean and neat before they arrive. So yesterday I started with the yard.

I stepped out to the shed at eight in the morning, to get it over with early. I pulled out the fancy Lawnboy walk-behind my dad brought down when my cheap mower died. It is lime-green and has a black plastic motor cover that is big around the top like a squared-off black mushroom.

It has a two-stroke engine that has for the past three years given me fits. It takes me almost as long to get the thing running as it does to cut the grass.

This time, after the usual struggle, I finally gave up and took it to the local small-engine repair shop. A man in a greasy brown apron came out to the back of my car and stood watching the mower dribble fuel into the trunk. He told me they don’t work on two-stroke Lawnboys anymore because they’re too finicky with the fuel now available. Gas fumes rose heavy from the trunk as he explained to me how new federal emissions regulations have rendered two-stroke engines, in his opinion, useless.

I thanked him and headed back across town. On the drive home, the gasoline odor was so strong in the car that even with all the windows down, I got a dizzy headache—sitting at a stop light woozy in the fumes, I envisioned brain cells inside my skull popping away like Coke bubbles.

I left the Lawnboy at the end of the driveway and dragged my old broken-down mower from the shed, a forest-green off-brand with a Briggs & Stratton engine that had two white puffy spider’s nests webbed to it. Three hours and two trips to Home Depot later, I had the thing running, but at such low RPMs that I had to coax it forward gingerly so it wouldn’t bog down and die in the heavy patches of grass.

Slowly, start-stopping row by row, I mowed the yard. By the time I finished, it was almost three in the afternoon. My whole day wasted on a task I did not value in the first place—and what’s worse, a task I would just have to repeat in a week or two.

While a POW during WWII, Jurgen Moltmann began to develop what would become known as the theology of hope, which shifted focus from the recorded acts of God in the past to the promised acts in the future. This hope was not one of sitting with folded hands, it was one of laboring toward that better world—hard work with a grand purpose.

In the POW camp, Moltmann and his fellow prisoners were set to various tasks of physical labor with no point but to keep them busy at something. Moltmann observed that being forced to labor at endless daily tasks that had no meaning or larger purpose—no future goal, no good outcome to hope for—was the one thing that drove his fellow prisoners mad, even to the point of suicide.

I think of Sisyphus condemned to roll his stone up that hill every day only to watch it roll back down and then throw his shoulder into it and start over. That’s what yard work is to me. It’s not just yard work though, is it? Even obviously useful work can feel like this: any parent engaged in the constant battle with ever-mounting piles of laundry and clutter and dishes and trash recognizes the feeling.

Brother Lawrence knew this kind of work. A lay member of the Discalced Carmelite Priory in Paris, Brother Lawrence did nothing that could be considered great. He didn’t translate Scripture; he didn’t do deep thinking or theology; he was not a social reformer or a great speaker. He labored in the priory kitchen for the good years of his working life. He washed dishes. When he was old he repaired sandals. And yet he found it fulfilling work.

He viewed every task, no matter how menial, as service to his fellow monks and service to God, and therefore possessing all the intrinsic value of so-called nobler acts of piety and service. Brother Lawrence was at peace.

I was irritated at having wasted the whole day on the menial and useless task of lawn mowing, while a manuscript needing revision and submissions needing managing lay dormant in my office. Then my wife came out and walked the yard under the darkening sky. As the first drops of what would be a tree-downing gully-washer started falling, Liz looked around, taking evident pleasure in the lawn.

My tools were unwieldy, and my labor was hard, and what it accomplished would not last long: even as I wheeled the hot mower back into the shed, nature was already erasing my work with her relentless, consuming growth.

It made my wife happy though. That is meaning enough to keep me at it.

July 9, 2013 A Baby Smaller Than Roosevelt’s Eye
Recent Comments
2 Comments | Leave a Comment
Browse Our Archives
get the latest from
Catholic
Sign up for our newsletter
POPULAR AT PATHEOS Catholic
1