A Baby Smaller Than Roosevelt’s Eye 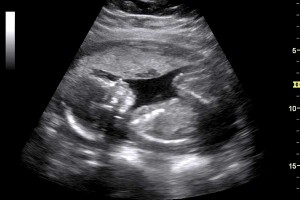 For most new parents, the first glimpse of the life they’ve created is a grainy ultrasound printout, when the baby resembles—if not a human being—at least a gummy bear.

In my daughter’s first photograph, three inches by five and black-and-white, she is microscopic in size. She is a five-day-old blastocyst, smaller—as one website puts it—than Roosevelt’s eye on the face of a US dime. She looks like a flaky-crusted apple pie.

Our sneak peek is not what I would call lucky; my husband and I sloughed through years of infertility before consenting to the medical interventions that made it possible for my daughter to grow in a dish for five days before being ushered to my warm insides.

It was a deeply considered decision, as carefully made as my synthetic-hormone-swamped brain would permit. We were willing agents in the creative process, to which an inch-thick stack of signed forms can attest.

When the embryologist handed me the picture of our two-toned apple pie, magnified thousands of times as a step in quality control, I knew it was a girl. Knew might not be as appropriate as predicted-and-turned-out-to-be-right, but I sure felt like I knew. In seconds I claimed her as mine.

If that embryologist had dropped our sand-speck baby on the carpeted floor of the doctor’s office, I would not have been able to find her. She could’ve stuck to the bottom of my shoe, harder to spot than a dislodged contact lens.

It wasn’t her size that made her mine. She was little more than an idea.

Still, at the bottom of that photograph was written in black marker, “Jones, Lindsey.” My name. Our idea.

A little more than a year later, she has a name of her own and cheeks like a greedy chipmunk.

The first time I told anyone I would write a book, I was a college sophomore working on my first assignment in an easy elective class: give a speech about an epiphany. My epiphany was that I was going to write a book.

What kind of book? I don’t know.

About what? I don’t know.

It was an idea.

Comparisons between the creative process and a mother’s gestation are well-worn, to be sure. But no woman who has delivered a baby can ignore the similarities to birthing a sentence, especially not one who did the former just weeks ago.

The feeling I had carrying around that embryonic speck is analogous to the way I feel about whatever writing I have left to do. It’s in there, but only a few people know it. I don’t know what it will look like yet, what or when it will be.

It took seven years after that assignment for me to remember I’d wanted to be a writer, that I had seen something invisible to everyone else and had to bring it—a book? an essay? a story?—into being. Whatever it is, it is still in its microscopic phase.

If alike in no other way, the processes of making a child and making art are alike in their capacity to inspire fear. The suffocating truth is that neither the apple pie nor the invisible book might have become something.

Most mornings during the first trimester of pregnancy, I awoke worried that I had miscarried. Occasionally I feared I had imagined the whole thing—there never was any speck to nourish or, worse yet, that speck belonged to someone else. It was my name written on the bottom of that photograph, right?

I sensed almost no relief from constant fear until the fifth month when my daughter announced her personhood by finally beginning to bulge beneath my skin. It’s hard to deny that the something growing inside you is healthy when your pants are harder to button each morning.

While pregnant, I could only eat my vegetables, go for walks, drink water not whiskey, and hope that baby seed would not stop growing.

So too with these words. Perhaps as an artist I am less creator than incubator; this thought both humbles and relieves me. Whatever words I must write will manifest with proper nourishment. While I incubate, I also incarnate—with cells and words alike can limbs be built.

Or perhaps I am a creator, but the control I have over my creation is far less than I’d like to admit—the piddling choice between water and whiskey.

Most days I feel not like an incubator or a creator but like a mere spectator. Is my job as a writer to observe the work being done by a greater energy, to see in the smallness of a sentence not discouragement but promise—miracle, even?

And once I have seen, to believe that a single sentence, word, or letter testifies to the possibility of creation, that letters are substance waiting to be tended by a patient, hopeful hand?

A creator must see what others can’t or won’t before she is able to bring forth matter from the darkness.

The day of my daughter’s birth, a hundred tiny white dots could be seen just beneath the thin skin of her button nose. Fixating on one of those little white dots, I whispered, “I saw you when you were smaller than that. I knew you then.”

Draped in a hospital gown, I peered into her plastic box and imagined the dots multiplying to become her entire nose, her entire face. From a single dot I saw emerge the pinnacle of creation. It’s true: she is nothing more than millions upon millions of specks—and yet she is mystery too.

Lindsey DeLoach Jones lives in Greenville, South Carolina, where she edits Emrys Journal and writes for Edible Upcountry. She earned an MA in English from College of Charleston and an MFA in Creative Writing from Seattle Pacific University. Her work has appeared or is forthcoming in Ruminate, Relief, and the South Carolina Review.

July 10, 2013 Smiling Skulls: On Death and Diversion
Recent Comments
3 Comments | Leave a Comment
"Ah, so now the imaginary War on Xmas is transmogrified into The War on Santa, ..."
David Miller How to Win the War on ..."
""Aural" refers to hearing, "visual" to seeing"
merphd The Gutenberg Imagination
""It doesn’t matter when you start the Sinatra Christmas playlist or put up your tree. ..."
C_Alan_Nault How to Win the War on ..."
"Yup."
Max Marvel Finding My Inner Calamity Jane
Browse Our Archives
Related posts from Good Letters