Can I See You? 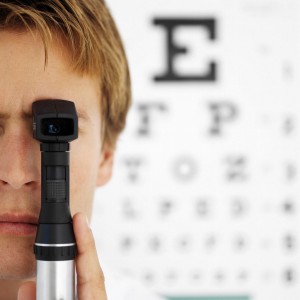 The vision test for the Army aviation pilot school application caused great angst among my classmates and me. One failed the requirement for depth perception by a tiny margin, and worked to have her senior-ranking father help to find a way to override it; she was unsuccessful. Vision was critical.

The year I graduated college, I entered flight school with the required 20/20 uncorrected vision.

In flight school, we studied all aspects of aeromedicine, including the anatomy of the eye. We protected our eyes with gold-wire rimmed Ray-Bans. We learned to fly wearing night-vision goggles to enhance our vision at night. Training on the Apache, we learned the tricky skill of flying with an infra-red monocle over the right eye, giving a picture based on infrared signature as well as a full complement of graphical information on position and navigation and weaponry.

Seeing was all-important. If you could see at night, you had the advantage over enemies who could not.

Business school after the military pulled me into endless hours of work on the computer using Excel, staring into glaring spreadsheets. Jobs after business school did the same. I squinted at the white board in classes and meetings, but refused to get glasses. I took breaks to go outside and focused on the New Hampshire hillsides, trying to pick out the details of trees, training my eyes for distance again. My sight was too important to let go.

“Watch me, mama, watch me!” my three-year old demands, looking over his shoulder with wide eyes as he prepares to launch himself from the couch to a beanbag. I take a deep breath, because we are thirty minutes in to these same requests, to watch. I’m making dinner, or watering plants, or doing something where I’m hopeful he’s entertaining himself and keeping himself and maybe the lamps in one piece. I’m trying to get something done, and the demand comes again “Watch me, mama, watch me!”

The hardest part is that I can’t discount this incessant request by assigning it to toddlerhood; what do I do when I write? Ask to be seen, beg to be read?

And what does this mean when we ask this, at three or at thirty-three? That we need with every part of us to be known? It’s a desperate kind of longing, the kind that is borne by some bedrock knowledge that all is fleeting, that we want our existence to matter, that we know somehow, as one of seven billion people on a tiny planet in an endless universe, that it does matter.

Meeting Terry Tempest Williams at an event, I was both charmed and unnerved by her focus on me as we spoke. When she talks to you, it is as if there is no one else in the room, despite those lining up for a quick word. In a sustained gaze, she cut through the facade of daily life.

That facade is of our own making; it is the image we project, the busyness on which we bob about, rarely allowing ourselves to sink into the meaning of things. I am embarrassed that I sometimes have to remind myself to slow down to sit and hold the gaze of my son or even my husband, to give them the gift of being seen as best I can.

“We see through a glass, darkly,” says Paul in 1 Corinthians. This seeing darkly, however self-imposed, is yet unacceptable.

In Atul Gawande’s disturbing but fascinating New Yorker article “The Itch,” he cites Richard Gregory, a prominent British neuropsychologist, who estimates that visual perception is ninety percent memory and less than ten percent visual nerve signals. It seems there is more to seeing than what optics allows.

Saying grace before meals, or with our toddler before bedtime, we close our eyes.

“The only thing worse than being blind is having sight but no vision,” said Helen Keller, and she should know.

Sight is important when you fly helicopters. But in life, perhaps what we’re after is less about being seen, and instead about being known.

“You have searched my ways and know me,” says David in Psalm 139. “You are familiar with all my ways.” This is the intimacy craved and delivered, and the psalmist seems astonished and grateful. Later Luke’s Gospel will assure us that not only are all parts of creation valued, but that even our hairs are numbered, assuring not only breadth in creation, but an exquisite familiarity, depths we do not ourselves know.

“Such knowledge is too wonderful for me, too lofty to attain.”

Paul assures us that we will one day see “face to face; now I know in part, but then shall I know even as I am known.”

Renewing my driver’s license this year, I passed the vision test easily; I still don’t need glasses, though I’m starting to hold a package at arm’s length to read ingredients. One day I will need glasses. Later still, sight will be replaced with vision. One day we will know as we are known.

August 20, 2013 Yeshua Ha’Mashiach
Recent Comments
0 | Leave a Comment
"I miss that dragon the most finally it's here. 😳IJ.636PX.CO/c7234i"
Dmaned11123 Poetry Friday: “The Burned Butterfly”
"Ah, so now the imaginary War on Xmas is transmogrified into The War on Santa, ..."
David Miller How to Win the War on ..."
""Aural" refers to hearing, "visual" to seeing"
merphd The Gutenberg Imagination
""It doesn’t matter when you start the Sinatra Christmas playlist or put up your tree. ..."
C_Alan_Nault How to Win the War on ..."
Browse Our Archives
Related posts from Good Letters