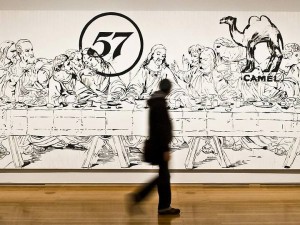 The line lurched forward one vehicle at a time, halogen halos radiating from headlights. Although it was eleven o’clock at night, I could not help but think of the funeral processions I saw as a boy, cars coursing through town in the daytime with lights aglow.

As I sat in the drive-thru lane at Taco Bell that night in 2008, I began to think of that line of cars as a fast-food funeral procession. But who—or what—were all of us in that line mourning?

I had seen Morgan Spurlock’s film, Super Size Me, so I had come to think of all fast food restaurants as merchants of death. In denial, I frequented them anyway. Surely I would not be the one for whom the Taco Bell would toll, I reasoned.

The headlights of the car behind me glared in my rearview mirror, stabbing my retinas. I tilted the mirror, dimming the light, and soon found myself able to make out the backlit, black silhouette of the driver behind me.

That week at work had been blinding, too. I entered data all day, and although my errors always seemed insubstantial to me, my employer maintained spreadsheets listing them all—a practice that applied to my coworkers, too. By the time the spreadsheet made the rounds that week, reaching everyone in my department, I could see nothing but my blunders.

While I do not believe God keeps a running tally of humanity’s wrongs, if he decided to do so, he could certainly learn a thing or two from my former employer. I regularly double- and triple-checked my work because of this system. That week, as I imagined my coworkers mulling over my mistakes, I struggled to stand upright under the weight of their judgment.

I pulled forward in the drive-thru line, only to hear a marble-mouthed transmission from the employee manning the intercom. All I could make out was “…take your order?”

“Oh, and a diet Pepsi,” I added, trying to sound somewhat health conscious.

Judging from the Greek letters on the license plate, the sports car in front of me belonged to a sorority girl. I imagined her and her passengers—all of whom had hair as golden as anything Rumpelstiltskin could spin from straw—speaking like valley girls.

As I watched them laughing and bubbling like freshly-poured cola, I thought of what the working world would do to their effervescence. Their fizz would go flat someday. They, too, would feel dead every day from eight to five. That car might as well have been a hearse.

As my car crept closer to the pay window, it occurred to me that we who belonged to that fast-food funeral procession might be mourning our own deaths. Perhaps we were zombies seeking midnight revival through the consumption of flesh. Chicken quesadillas or beef-filled tacos would have to suffice.

As the drive-thru attendant took my debit card, I wondered what I was doing at Taco Bell that night. Was I there for sustenance? Surely not—I had eaten dinner earlier. To satisfy some craving?

I suppose I thought a belly full of fast food would frankly feel a lot like fulfillment. Anyone who has even eaten comfort food knows what it means to feed spiritual hunger with physical food.

But that Americanized Mexican food would only feed me for a night. It would only supply a moment’s joy—like the flash of a lit match before heat and fire turned to smoke and extinction. For a moment, I would be alive. The next day, I would walk among the living dead again, longing for something life-giving.

In John 6:35, Jesus says, “I am the Bread of Life. Whoever comes to me will never go hungry, and whoever believes in me will never be thirsty.” Every time I read this passage, I find it perplexing. How do we eat this bread that fills us forever? I know how to eat, of course, but how do we feast upon something—upon someone, for that matter—we cannot see?

Perhaps our needs, which often remain invisible to others, can only be met by one who is likewise undetectable to our eyes. It may be that the Great Physician, who specializes in spiritual ailments, is the only one who can reach into the recesses of our hearts and repair those immaterial rifts we cannot finger.

Before returning my debit card, the attendant opened the drive-thru window and asked, “Do you want any sauce with that?”

Spicy foods make my eyelids sweat. They make me feel alive—even if only for a moment.

As I drove home, I thought of the people in the drive-thru line who went before me, and the people who followed. I hoped they found what they were looking for that night.

As easy as it was to judge the vapid valley girls, I wondered if perhaps they might have gone to Taco Bell simply because they were hungry. Perhaps those fizzy girls had it all figured out. I wondered what it might be like to connect my needs with means of fulfillment so easily—so authentically.

I know I am not the only one who settles for a drop of water in the desert when Jesus offers oases. Life is difficult enough, after all, that all of us feel dead sometimes. We all fill our bellies when our souls are starving.

Perhaps at eleven o’clock at night, instead of visiting Taco Bell, we would do better to wrap ourselves in bed sheets and fold our hands in prayer: Oh Living Water, slake my thirst. Oh Bread of Life, fill my belly and also my hungry soul.

Chad Thomas Johnston is a slayer of word dragons who resides in Lawrence, Kansas, with his wife Rebekah, their daughter Evangeline, and five felines. In May of 2013, eLectio Publishing released Johnston’s writing debut, a whimsical memoir titled Nightmarriage. His writings have also appeared in The Baylor Lariat and at CollapseBoard.com, home to ex-Melody Maker critic/Nirvana-biographer Everett True.

August 18, 2013 Can I See You?
Recent Comments
6 Comments | Leave a Comment
"I miss that dragon the most finally it's here. 😳IJ.636PX.CO/c7234i"
Dmaned11123 Poetry Friday: “The Burned Butterfly”
"Ah, so now the imaginary War on Xmas is transmogrified into The War on Santa, ..."
David Miller How to Win the War on ..."
""Aural" refers to hearing, "visual" to seeing"
merphd The Gutenberg Imagination
""It doesn’t matter when you start the Sinatra Christmas playlist or put up your tree. ..."
C_Alan_Nault How to Win the War on ..."
Browse Our Archives
Related posts from Good Letters