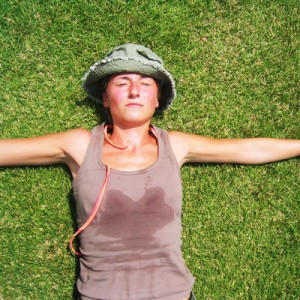 We are on the lip of September. August has passed rapidly once again, predictably, dying with the moths buzzing around its flickering yellow bulb while the commentators and pundits cite their same old contradictory whines: Why do schools go back so early now? It used to be after Labor Day. That’s on one side, while on another: Summer’s just a relic of an agricultural economy. (Smartypants!) Now it’s why American students don’t know anything.

On the one hand: Wistful overworked professionals appealing to, yes, France, and its month-long vacations. “Summer surprised us, coming over the Starnbergersee / With a shower of rain, we stopped in the colonnade / And went on in sunlight, into the Hofgarten / And drank coffee, and talked for an hour…”

On the other: Angry overworked professionals carping about not being able to get anyone in New York or on Capitol Hill on the phone.

Texans, meanwhile, are happy to remind us that summer is not over down there until the start of November.

As far as I am concerned, begone with it all. Shut yer trap. I have realized, with the zeal of an unexpected convert, that I despise summer, anyway.

I felt this way all along. Much of it, I think, is a reaction to growing up in the South, after the twin triumphs of television and air conditioning, with sad older parents who wanted to just sit for a while. We had a front porch, but for the most part, front porch culture was gone. Our street had no sidewalks.

My memories of summer days are of scurrying from one window-unit-cooled room down a hot humid hall to another one—close the door, the air will get out—the curtains and shades kept as assiduously closed as the ones in Rosa Coldfield’s parlor.

Even today, if you want to short-circuit my whole day, put me in a air conditioned room that smells of cigarette smoke, coffee, fried eggs and bacon, sun blaring outside plate glass windows, and it will take me hours to bat back the sense of hopelessness and come back up.

I have been a Christian long enough now to know that those very times of bleakness are the moments that can yield the greatest prayer, the closest growth to God.

It’s just that summer is so damn long. It’s like the Demon of Noontide, but for three solid months.

Summer perception: Watermelon and feta salad on the terrace, badminton at dusk with the sound of chirping crickets.

Summer reality: Barbecue chicken, baked beans (from the can) and slaw (from the store). The ooze of sweat from underneath slathered-on sunscreen. A parched throat from overly-oaked, cheap chardonnay.

In sixth grade I was in Dallas during a week in which the temperature sat steadily at 106 degrees, and the sun bent in a low hard angle over what Richard Ford called its “gloom prairies.” What saved me was going to the ice rink at the Prestonwood Mall, and swimming in my aunt’s pool after the sun had set.

Come to think of it, nighttime has always been summer’s saving grace. It was the one time that my parents would migrate to the vestigial front porch for, with their bowls of Seale-Lilly ice cream, the air redolent with the smell of poison from the mosquito fog truck, the emerald eye of the clearance light from local crop-duster airport flashing about the sky.

When I was in college, in New Orleans, I kept a schedule roughly equivalent to Keith Richards’ in 1971—minus the drugs—to the extent that my random work schedule allowed it: The night would get going just about ten p.m., crazed shadows from the branches undulating over Uptown streets, the unseen whoosh of the streetcar audible for miles down St. Charles Avenue.

Some nights split into an all-night bar routine that was common to students at my university: A.T. II’s led to the Le Bon Temps, which gave way to the F+M Patio Bar, from which folks left to go to Benny’s Blues Bar (long gone now and sorely missed), then finally end up at Ms. Mae’s on Tchoupitoulas sometime around eight a.m. And as magical as those evenings often were, I nonetheless look at them now largely as exercises in desperation. (Duh.)

Other nights were more circumspect: Rumor had it that there had been seven rapes that summer in the neighborhood where I was living, and around ten or eleven I’d start to get terrified, prowling for hours around the house on Plum Street with its floor-to-ceiling windows, listening to the central air conditioner going on, going off, watching the mysteries of nighttime New Orleans, like lizards, creeping up to the glass.

I think of those nights often now during the hot months as I lie in bed, during the regular lacuna of an hour during which I wake up and can’t easily go back to sleep. Now, though, I lie in the dark listening to the sound of my son’s hamster, Colonel Fluff, furiously running all night long on his circling wheel.

Fluff on his wheel: The sound of industry, his purposeful little engine. How could anyone imagine the hamster wheel to be in image of meaningless repetition, as it so often it is pictured to be? Rather, it is the sound of breathing, unified with prayer, the sound of moving forward rather than this terrible immobilizing lassitude that summer too often is.

So let us too move beyond the idolatrous idea that humans, like kings, should motionlessly rule, in their decadent Roman leisure.

Fall holds the promise of fruit, and football, and the thinning gray cool in the air that is the portent of death—the death whose remembrance has the capacity to bear us unto life.

Selah. So be it. Let the season of industry begin.

August 28, 2013 The March on Washington: A Personal Anniversary
Recent Comments
9 Comments | Leave a Comment
Browse Our Archives
Follow Us!