The March on Washington: A Personal Anniversary

The March on Washington: A Personal Anniversary August 28, 2013 Guest Contributor 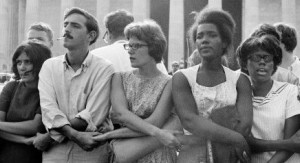 By Christine A. Scheller

I didn’t expect to mother a black child and certainly didn’t expect that brilliant, beautiful child to kill himself in the year America’s first black president was elected on a message of hope and change.

Growing up in a small, lily-white New Jersey town, I briefly had a black friend. One day, she came home from school with me and my mother advised me that it would be best if she was gone before my late father got there. My father had grown up in Newark and had gotten beaten up regularly by black boys, my mother says, at least until he became a gang leader and Golden Gloves boxing champion. (Men who worked with my late father in urban ministry in the 1960s have told me they never saw any hint of racism in his interactions with people of all races and ethnicities. I believe that like all of us, he was a product of his time and place, a man who sometimes rose above his circumstances and sometimes did not.)

The afterschool play-date was my formal introduction to the concept of race and it was startling. I had no idea what it meant. All I know is that the girl, whose name I don’t recall, disappears from my memory after that.

In college, where I got pregnant, I hung out with the African students because, like them, I was an outsider at our Mennonite school. When my son was born, my family and friends embraced us both, which is not to say any of us possessed anything like racial awareness. Early in my son’s life (I’m ashamed to admit this) I made sure people knew his paternity-denying father was African and educated so that they wouldn’t think I—daughter of an actual one-time ghetto thug—had slept with one.

Pretty quickly I realized the moral bankruptcy of my reasoning and thus began a long, slow racial awakening that happened only because I had accidentally, providentially, conceived a black child. As that beloved child grew into manhood, I came to understand something of what it means to be black and male in America.

I learned it in stores when his white brother was not followed and he was. I learned it when job openings were filled until his white friends applied for them. I learned it when he was harassed by the police and when he grew uncomfortable with the portrayal of the Bailey family maid in our favorite Christmas film, “It’s a Wonderful Life.” And then finally, I learned it from black friends—listening to them, reading them, laughing and crying with them.

Now here I am on the fiftieth anniversary of the March on Washington, deeply, painfully, personally aware of the injustice black and brown Americans experience still, but absent the person who gave birth to my distress. I feel, quite often, like a limousine liberal whose concern is manufactured, inauthentic, merely theoretical. And yet, my fundamental way of being in the world was so altered by giving birth to that child, by mothering him, by learning through him the awful dark roots of my own privilege, and by losing him, that when I see a black boy between the ages of two and twenty-nine my impulse is exactly the opposite of the fraud’s feigned interest.

I know that much of what I feel is nothing more than a grieving mother’s incessant longing for her child, but he was half white and this never happens when I encounter white boys. I also realize that it can be seen as dehumanizing in its own sad way—a negative of “they all look alike.” Having analyzed it ad nauseam, however, I’ve concluded that it is most likely the common lot of anyone who has raised and buried an African American son.

I was born on the first anniversary of the Rev. Dr. Martin Luther King Jr.’s iconic speech, in the year Lyndon B. Johnson signed the Civil Rights Act into law. In the year America elected its first black president, my beautiful black son refused to believe it could happen. He was laid to rest on the fortieth anniversary of the day America’s racist core rose up and issued another grasping, violent “No!” to Rev. King and civil rights.

Perhaps these facts hold meaning only for me. Perhaps they’re merely coincidental and I’m just a sentimental, middle-aged white woman caught up in a vortex of her own grief. But I like to think our lives have meaning, that the times we’re born into and the things that happen to us require something of us, that our circumstances are the seedbeds of our spiritual callings.

So, on this day, I’ll take my place on the Mall in Washington D.C., and along with a great cloud of witnesses, I’ll pray for a future in which children like my late son will truly cease to be judged by the color of their skin. I’ll vow once again to use whatever meager resources I have to make sure the check those marchers came to D.C. to cash fifty years ago is made good, that finally “black men as well as white men, would be guaranteed the unalienable rights of life, liberty, and the pursuit of happiness.”

Christine A. Scheller is a widely published writer who spends her weekdays advancing dialogue about science, ethics, and religion in Washington, D.C., and her weekends tending her garden at the Jersey Shore. Her award-winning essays have been included in anthologies like “Suffering Redeemed: Stories of Grace in the Midst of Personal Tragedy.” Follow her on Twitter @cascheller for live updates from the Mall.