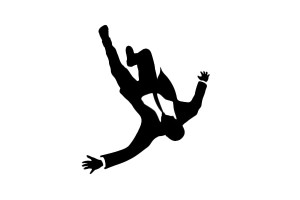 The opening credits of Mad Men have always disturbed me: Don Draper falling out his Madison Avenue office window sinking past billboards and ads, past a stocking-clad woman’s leg, past his family. It’s a long free fall and he never hits bottom.

If only somewhere during his downward tumble, Draper grabbed onto a copy of Richard Rohr’s book Falling Upward: A Spirituality for the Two Halves of Life, then he might read this small, wise book while cocooned in a body cast, broken bones mending. With some sexy nurse or his second wife standing by to turn the pages, Draper might begin to understand that there’s a reason neither his career success nor his marriages nor his affairs satisfy him, a reason that speaks to the needs of his soul.

He’d discover that it’s time he entered the second half of his life.

“People will do anything to ease their anxiety,” Draper’s heart surgeon neighbor tells him one snowy night when, called to an emergency, he prepares to ski through the streets of New York. Draper responds with his usual fraught silence, then takes the elevator to his neighbor’s apartment and continues his affair with the good doctor’s wife.

Seeking validation and identity—trying to be known and understood through our actions—is, according to Rohr, typical first half of life activity. We establish our identity, cement our ego, develop rules and structures for our beliefs, choose a profession, and find a mate, all to build a container for the self.

As we reach middle age, sometime after our mid-thirties and into our early fifties, Rohr writes that we encounter increasing tension as we recognize that the container is not our life. What has worked to soothe our souls in the past—whether those actions are misguided or noble—will at some point fail us.

In that dissatisfaction, Rohr says, we turn to the mystics, and poets, like Mary Oliver who writes, “What is it you plan to do with your one wild and precious life?”

The task of the second half of life is to discover what our container of self is meant to hold, and we don’t come to it easily. It usually takes a crisis.

Unloved, orphaned, raised in violence and alongside prostitutes, Dick Whitman stole the identity of a dead fellow solider in the War, becoming Don Draper, a man whose secret past doggedly shadows the present.

Like Dante beginning a journey in the middle of his life, the fall Draper takes in Mad Men’s credits is the one thing that has the power to move him into the second half of life.

We need to let go. To embrace change. To bring our shadow selves into the light.

Actually, we don’t have to do any of these things. Many of us don’t, as Rohr notes:

It has been acceptable for some time in America to remain “wound identified” (that is using one’s victimhood as one’s identity, one’s ticket to sympathy, and one’s excuse for not serving), instead of using the wound to “redeem the world,” as we see in Jesus and many people who turn their wounds into sacred wounds that liberate both themselves and others.

As Mad Men ended this season, Draper decided to leave his job, children, and New York for California. Leaving home is often the opening act of the hero’s journey as Rohr reminds us. The hero “‘falls through’ what is merely his life situation to discover his Real Life.” But Draper doesn’t move away. The final episode ends as he stands with his children outside the whorehouse he lived in as a youth.

I want to hope that Rohr has rubbed off on Draper. That in front of the dilapidated house, he has finally stopped running from his past, understanding that “the two halves of the journey are cumulative and sequential and both are very necessary.”

“If you try to skip this first journey,” Rohr writes, “you will never know why this first container must fail you, the wonderful fullness of the second half of the journey, and the relationship between the two.”

Like Don Draper standing on that lonely street, facing where we’ve been, who we’ve been, and what we’ve done can be humbling and humiliating. But Rohr offers compassionate encouragement: “It is when we begin to pay attention, and seek integrity…that we begin to move from the first to the second half of our own lives. Integrity largely has to do with purifying our intentions and a growing honesty about our actual motives. It is hard work.”

“There is a God-sized hole in all of us waiting to be filled,” writes Rohr, who is a Catholic priest. “God creates the very dissatisfaction that only grace and finally divine love can satisfy.” Lest we think that next season we’ll find Draper has become a church deacon, Rohr tells us that in the second half of life we live on the fringes of organized religion, of organizations of any sort, no longer interested in defining ourselves by external measures.

In the second half of life we expand our thinking and sense of interconnectedness with others while we simultaneously seek out and thrive in solitude, and narrow our close friendships to those who truly see us and speak truth.

I hope I tune into Mad Men next season to find Draper walking on an empty, foggy beach, inspired by Rohr:

Just remember this: no one can keep you from the second half of your own life except yourself…. Pain is part of the deal. If you don’t walk into the second half of your own life, it is you who do not want it. God will always give you exactly what you truly want and desire. So make sure you desire, desire deeply, desire yourself, desire God, desire everything good, true, and beautiful.

Cathy Warner is the literary editor for Good Letters and a graduate of Seattle Pacific University’s MFA program in Creative Writing. She lives with her husband on Bainbridge Island, Washington, where she writes, hosts a writers’ retreat, and renovates homes.

August 28, 2013
The March on Washington: A Personal Anniversary
Next Post