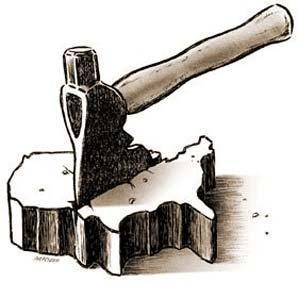 This is not an essay about politics but I have to begin with politics because it stands between you and me and what I want to say to you, which concerns our darkened hearts and our dreadful tribalization of a country whose motto is E pluribus unum.

The politics are this: I have an unfashionable view of human rights and nature. I stand for localism and classical education and reverencing life; I stand against warmongering and utilitarianism and corporate cronyism. As a consequence, I have no place among Republicans or Democrats or Libertarians. If your guiding lights are not restraint and community and Holy Scripture, then I want no part of your goddamned party.

None of which is to say that you are a bad person for being a Republican or Democrat or Libertarian, or even one of those undecided Independents journalists like to interview before elections, as if inability to commit is evidence of wisdom. One or both of us is wrong, and it doesn’t matter; I’ve retreated to my rural corner and you may have the world for all I care, just leave me and my family out of it.

All this is to say, however, that I have no fondness for our current president’s worldview. Nor the one before him, nor the one before that one. It’s not their fault; they are harbingers of the times. They give us what we want, because our wants form the standard of justice. Politicians cobble together electoral majorities with empty words because we will tolerate no less and no more.

My lack of fondness for President Obama is only relevant because it accentuates the praise I want to offer him—while perhaps in the process damning a fair portion of the rest of us.

On February 26, 2012, George Zimmerman killed Trayvon Martin, and a great many people set about disputing What It Means. With them came gleaming-eyed opportunists, and between the self-appointed spokesmen and the fury-stokers, a fair portion of the country is now angry.

The people who hate Zimmerman wanted President Obama to say something to condone their righteous anger. The people who hate Martin wanted President Obama to say something they could revile. There was no winning, but still he came forward, absent fanfare, and gave one of the most forthright, guileless speeches ever delivered by an American president on the subject of race.

Try to understand, he asked white Americans, what it’s like to be one of us. To be scrutinized in the manner we endure whenever we leave our neighborhoods. To be snubbed in countless ways. To be acutely aware that so many fellow citizens believe we have less worth in God’s eyes.

In this he faced an insurmountable wall. We whites are jaded from a thousand college and corporate sensitivity sessions, designed to trumpet the moral superiority of their facilitators. We’ve choked down the overused storyline in television shows and movies. We get it; we get it.

Which means we stopped getting it. We agree, most of us, that slavery and continuing racism are profound injustices betraying the principles on which this country was founded. We took it in, and many of us quietly began to resent being reminded of it, coming as it did alongside occasional but lingering insults—and sometimes outright assaults—from members of the group we are supposed to regard as permanently victimized.

The president’s personal words (“that includes me”) and his humble tone sought to penetrate this shell of resentful familiarity. Then he went farther—certainly farther than I’ve heard anyone on his political side go. He mentioned a reality that white writers (liberals, at that) have been denounced for observing, namely, that young black men commit crimes at a rate sharply disproportionate to their numbers.

It was an offering. I understand why you are afraid of men who look like me. All he asked in return was an equivalent offering. Please understand how it makes us feel when you make no effort to hide what you think of us.

It wasn’t going to make the strident voices on either side happy, but it was the right thing to say. Admitting this doesn’t require you to endorse his policy on killing people with drones, or embrace Obamacare, or approve of how the National Security Agency amasses mobile phone information. You don’t have to agree with anything else he stands for to acknowledge the fundamental decency in President Obama’s statement.

But we’re not inclined to acknowledge decency in our opponents. We’ve drifted backwards to this spiteful place because we haven’t been honest. We haven’t been honest because for too many, our righteousness is defined by the wrongness of our adversaries. They can’t have a valid point, not a one. Conceding that they speak truth in even the smallest detail is conceding defeat, because this isn’t about truth, it’s about self-righteousness. I can only be an angel if you’re a demon.

Thus do conservatives refuse to acknowledge the rage that accumulates in a lifetime of marginalization, while liberals scrupulously avoid data on urban social pathologies.

A black writer recently described “the talk” that black parents must have with their children, about the dangers of whites. A white writer retaliated. We have to warn our kids about you people, too.

We can’t listen to one another. But our children listen to us, don’t they? God forgive us for what they hear.