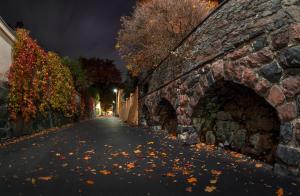 The compelling narrative of “Lord, Sky,” set during the time of an election, is also sheer poetry. The writer repeats diction (“light,” “sky,” “moon,” “grin”) and layers language (“heaven,” “rainbow,” “stars,” “night,” “midnight”) to invite us “little trees of heaven / stuck in concrete” to pay heed to the world above and around us, to “vot[e] for earth all over again.” The writer deftly moves the setting and action of the narrative from the “grinning moon” (l.8) of a late afternoon walk, to a hospital interior and a friend’s “rainbow grin” (l.17), and back to the street and the random meeting of two “grinning” strangers who chat about a pet dog (ll. 33-40). The poem holds in tension the realities of divergent social classes, states of health, and political visions, anchoring all in the “glorious night”… “shining for anyone/who stops to gaze at this sky…” (ll. 25,9-10).

Given the events in our own political landscape over the past month, Betsy Sholl’s poem provides a short centering prayer we might all need to repeat in the weeks leading up to November 6.

“Lord, let me stand here/feeling nothing but this moment….”

The light falling on the steps of city hall
this late afternoon infuses the whole sky
and bathes these poor little trees of heaven
stuck in concrete. Flooding down from all sides,

light slants across ruddy storefront brick,
streaks along cables, glitters up from the bay,
and now, as I turn west toward the hospital,
here’s the moon, the Cheshire moon, grinning

bright as a politician’s promise, only better,
not favoring a few, but shining for anyone
who stops to gaze at this sky, which not even
the coldest facts can make less marvelous

just now, before the tabulations begin.
And here’s the hospital, grinding on, full
of wires and tubes, trays of food, socks that
puff up and down so my friend’s legs don’t clot—

Lord, isn’t it wonderful? Her loopy rainbow grin,
her dozing off mid-sentence, waking surprised,
to say, Oh hello, as if I just arrived.
And now when I say good-bye and step out,

the sky’s so deep, I want to stuff the ballot box,
voting for earth all over again, happy to shiver
in the glow, as the first stars poke through
this impossible-to-name, not-yet-midnight blue,

letting it pour over me—glorious night,
the brightening moon, below which we turn
in endless space, all of us afloat, held
by invisible strings, though we feel so solid,

so full of our own weight. Lord, let me stand here
feeling nothing but this moment, spinning
and not dizzy, not yet facing the election results.
Let the bass from this car pulse through me

as the tattered man leaning on the streetlight
stops another, just to ask the name of his dog,
nothing more, just to say that name, Herbie,
and knuckle his ears. Amazing—two men,

one in a fine suit, one in frayed tweed, stop
and chat, shake hands, each grinning as they part—
here, under this glowing sky, the polls still open,

and the moon above, new, all over again. 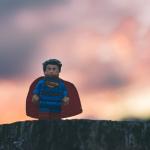 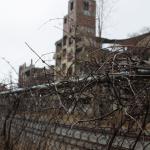