Morning in a Forgotten Neighborhood 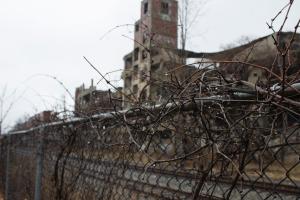 The other day it was raining. The clouds were impossibly low, skimming the tops of buildings as they scuttled across eastern Michigan on their way to somewhere nice. The rain fell not so much as drops but as a fine, coating mist that moistened rather than drenched.

A pack of stray dogs picked their way through an empty lot to my left, heading, no doubt, toward the dumpster behind the Little Caesar’s a couple of blocks away. They held their heads down close to the ground and seemed hunched in the shoulders, insofar as dogs can be said to have shoulders, or to hunch them.

The moistening rain had chastened the dogs, somehow, as it had, that morning, chastened me.

I walked down the front steps of the church and along the sidewalk flanked by a chain link fence that separates the church garden from the street. Impossibly tall and monstrously large sunflowers dangled from thick green stalks, their innards picked clean by all the birds. A man came hustling toward me, bent over a walker that bumbled along the cracked and broken concrete.

I recognized him immediately as M. He waved to me and smiled a mostly toothless smile.

I don’t know, as I compose this musing, whether the impulse to write about these moments at Saint Anthony’s on the east side of the city of Detroit is good or bad. Sometimes I think that I should stop writing altogether and just be, just live, just do my duty day to day as the seasons unfurl in what feels, to me, a rapidly increasing procession carrying me toward my own death.

I realize, more clearly with each passing year, that there is nothing in particular I am supposed to accomplish. No great task. No tremendous calling. No fate or destiny that can be named or titled.

I realize that my own desire to write is itself a kind of sickness. Are these moments at Saint Anthony’s, out in the dampening mist of a gray and empty day, better left to silence and to the indeterminate knowing that is God’s alone?

Do I even have the right to describe M and his walker-assisted shuffling around this neighborhood, just off of Gratiot Avenue, in an otherwise forgotten neighborhood in a city that has lingered in neglect and shame for decades?

You must understand that when M smiles, it is a warm and generous smile, with a slight, impish twinkle at the left corner. You have to understand that M and I play a little dance with one another every time we meet on the street like this, or at the steps of the church, or when he comes into the sanctuary an hour or so before Mass with a desperate look on his face.

M needs some money for dope. But I hesitate to write this down. I hesitate to diminish the man by naming the need. I will give him the money. And this will shock you. Don’t give money to a person when you know that he’ll use it for drugs.
Ah, but it is even worse than that. The other week, I gave M some money and he went out and got loaded and ended up at the hospital, victim of an overdose. He almost died. That death would have been on my hands.

Still, I gave him some money the very next week. I don’t give very much because I don’t have very much. A few dollars here. As much as ten bucks now and again if my wallet is full.

I give money to N also, who takes it and goes right out to the local liquor store to get so completely wasted that I often see him around the neighborhood leaning against a telephone pole or a rickety fence, utterly insensate, barely able to stand.
Some people at Saint Anthony’s ask me for money and some don’t. But one thing I’ve come fully to recognize is the toll it takes to ask. There is an internal struggle. There is an element of humiliation. Always.

Perhaps the robes I wear as a lay brother in the New Order of Saint Francis make it easier. I look like someone who is supposed to do something. But the asking and the giving is never without its element of tension, of power dynamics and resentment and a lingering tinge of regret.

This hesitant asking and giving is, all in all, an unpleasant thing. And yet for some reason I am committed to facing these unpleasant exchanges day after day, week after week.

I’ve come even to savor, strangely, the bit of bile that rises into my throat when I’ve been asked once too many times on any given Sunday and my wallet is lighter than I wanted it to be and I feel as if I have been used, taken advantage of, reduced to being less than a person and more like an ATM.

I wonder, would M or N love me, pat me on the back, smile at me so warmly if I didn’t pass out these dollars.

Everything about this asking and giving is shaming and undignified and sad. It harms everyone involved. But there is no way to redeem this harm except to dive deeper into these fucked up relationships of need and dependence and shame.
No way that I know of, no other answer. Slowly, I’ve stopped caring as much about the money that leaves my pockets, stopped feeling as much either of regret or pride.

Slowly, I’ve started to experience something else altogether, but it is difficult to describe this other thing, difficult to give it a name on this particular wet and gloomy day, with M coming toward me, rolling along behind his walker, impish grin on his face as a low and rumbly peal of thunder shakes the trees of Detroit, trees that are not cedars, but seem, today, like they might as well be. 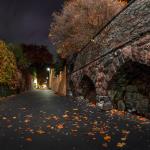 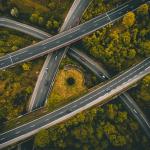 October 17, 2018 Waiting for Nothing to Happen
Recent Comments
0 | Leave a Comment
"Ah, so now the imaginary War on Xmas is transmogrified into The War on Santa, ..."
David Miller How to Win the War on ..."
""Aural" refers to hearing, "visual" to seeing"
merphd The Gutenberg Imagination
""It doesn’t matter when you start the Sinatra Christmas playlist or put up your tree. ..."
C_Alan_Nault How to Win the War on ..."
"Yup."
Max Marvel Finding My Inner Calamity Jane
Browse Our Archives
Related posts from Good Letters