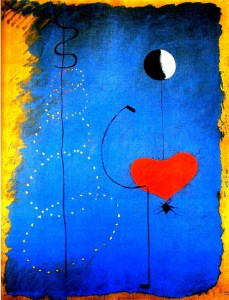 “Why is it possible,” asked Richard Feynman a year before he won the 1965 Nobel Prize in Physics, “for people to stay so woefully ignorant and yet reasonably happy in modern society when so much knowledge is unavailable to them?”

Feynman fretted that people cannot embrace wonder if they do not imbibe science. In my church there is a young man who cannot speak; he can only point and hoot. He claps his hands during the liturgy; he waves recklessly at people he recognizes. His mother keeps a grip on his belt loop, lest he knock over candles, or wander into the choir. Sometimes he points at the ceiling, gesturing wildly for the rest of us to look, and in those moments I am certain he sees angels.

Knowledge is no precursor to wonder. Science is no guarantor of joy.

Yesterday I mentioned a low-IQ man who will soon be sterilized, and a retarded child who will die because she isn’t allowed access to the kidney transplant queue. We have lost the language, I said, necessary to talk about these decisions in terms of their morality.

Psychology popularizer Steven Pinker would fervently disagree. He recently penned an unblinking defense of scientism, a term that—despite his protestation of ignorance about its meaning—has long been understood to mean the application of scientific methods to realms where they offer no guidance. To the contrary, Pinker asserts that science can illuminate “the deepest questions about who we are, where we came from, and how we define the meaning and purpose of our lives.”

Science can certainly give us the means to illuminate many corners of a darkened world, just as it can give us the means to sterilize a boy whose brain is not suitable to yield the happiness Richard Feynman equated with knowledge, and to ration organs so that only the mentally fit receive them. But can it tell us what to think of such acts?

Yes, answers widely followed atheist Sam Harris. He assures us we have no need of God to demarcate good from evil; instead we can search the “moral landscape” to determine what rules maximize “human flourishing.” What’s moral, Harris believes, is what benefits most people.

Harris derives his terminology from concepts mathematicians apply when solving multivariate equations. The poet and the priest might ask how mathematical morals can help us satisfy our craving for divinity, or cultivate sacrificial love, or craft a novel that will open someone’s eyes to purposeless beauty that knows no measure, that is an achingly inarticulable glory, an epiphany that reminds the reader, if nothing else, that epiphanies still exist in a measured and metered world.

Pinker’s answer is to stop pining for these things. “The moral worldview of any scientifically literate person—one who is not blinkered by fundamentalism—requires a radical break from religious conceptions of meaning and value.”

Both Harris and Pinker praise “human flourishing” as man’s moral zenith. And what is human flourishing? Less ignorance, less poverty, less pain, and with these, more luxuries, more peace, more opportunities for self-actualization and self-determination. The Westminster Catechism teaches that the chief end of man is “To glorify God and enjoy Him forever.” Now the chief end of man is to enjoy himself for as long as science will allow.

New York Times religion writer Ross Douthat calls this an “aesthetic morality.” Anchored in nothing but its authors’ preferences, it is as malleable as man’s tastes. Right now we worship independence and material wealth, and so we good people agree that it’s only humane to sterilize a retarded man.

What will “human flourishing” mean to the nations’ elites a hundred years from now? Who will be expendable then, that the majority might flourish? “All the great, important decisions that our democracy will be forced to take in the next decades,” claims British physicist Bryan Cox, “are based on science.” God help us, he is probably right.

He is right because the modern apostles of science, having eliminated all evidence that does not derive from man’s five physical senses, place man by default at the pinnacle of creation. Man is the end of creation, and in modern times he is its author. Man is judge and man is measure, and little wonder, then, that man’s worth to man can only be assessed in terms of his contribution to the well-being of others.

“Being human,” wrote Viktor Frankl, “always points, and is directed, to something, or someone, other than oneself…. The more one forgets himself—by giving himself to a cause to serve or another person to love—the more human he is and the more he actualizes himself.”

You can save your life, in other words, by laying it down. You can reclaim that in you which is human yet dying by valuing other humans over yourself.

How, then, might we speak of the man who will be sterilized, the girl who will be denied her chance for a kidney? How will we speak of that man sitting listless on a street corner, that actress stumbling in and out of rehab, that parent whose words we can scarcely bear, that spouse whose touch makes us cringe?

I don’t know the ends of those conversations, but the beginning must be this, for our sake, for Christ’s sake: What is love?

August 26, 2013 The Mill and the Cross
Recent Comments
23 Comments | Leave a Comment
Browse Our Archives
Related posts from Good Letters