Over the Rhine’s Sound of Place

Over the Rhine’s Sound of Place September 17, 2013 Guest Contributor 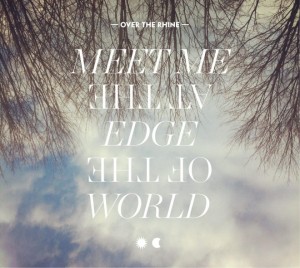 Early in the film, Lone Star, written and directed by John Sayles, a man poking about in the Texas borderlands says, “You live in a place, you should learn something about it.” Karin Bergquist and Linford Detweiler have lived in and learned about Ohio most of their lives: rural childhoods, Malone College where they met, and music-making in the historic Cincinnati neighborhood from which their band, Over the Rhine, takes its name.

Now living in a nineteenth-century house in Highland County, Ohio, the married singer-songwriter duo has spent recent years learning the ways of what they call “Nowhere Farm,” the names of the birds and trees at home there, and the rhythms of the day in a place where, heeding the advice of Detweiler’s father, they’ve kept the edges wild.

While Meet Me at the Edge of the World, Over the Rhine’s new double-CD release, isn’t the first to emerge from Nowhere Farm, it documents a deepening attention to and appreciation of place. Through thoughtful lyrics and tunes drawn from the deep American musical tradition, it’s clear how much Bergquist and Detweiler have become, in agrarian writer Wes Jackson’s words, “native to this place.”

It’s in the land’s closely observed particulars that they take “swig(s) of a little kickass beauty,” and their lyrics repeatedly summon details to the mind’s eye: “One lone tupelo stood against the ironweed”; “Just before the day kisses the night / You see the redwing blackbirds fly”; and “Old pre-Civil War brick house / Standin’ tall and straight somehow / Called home.”

Through the strange alchemy of word-craft, these carefully rendered particularities of a place reach across varieties of experience and memory, making the particular accessible, even familiar. In an increasingly homogenized landscape of strip malls, franchise restaurants, and prefab housing developments, there are never enough reminders that somewhere trumps anywhere, anytime, and that humans who refuse to adapt to their location inevitably cause great—if often unintended—harm to the land and themselves.

Wallace Stegner envisioned settlers of the American West as falling into two types: the “boomers,” who “pillage and run,” staying in one place only long enough to exhaust its readily available resources, and the “stickers,” who “settle, and love the life they have made and the place they have made it in.”

Through the patience acquired from staying still, stickers often find a freedom denied boomers: the freedom of consent, of accepting what is, rather than the far more common understanding of freedom as power to choose.

While there are dark moments in these new songs, the collection sounds less troubled than Over the Rhine’s previous work. Bergquist’s rendering of Robbie Robertson’s “It Makes No Difference”—a classic from The Band and the only cover out of nineteen tracks—is telling. Rick Danko’s vocals, full of white-hot anguish in The Band’s 1976 farewell concert, The Last Waltz, are transformed by Bergquist into glowing embers of passion. The fire still burns, but now with coals to be banked overnight.

Fine lyrics sound even better with an instrument as supple and emotionally versatile as Bergquist’s voice, and Detweiler’s backing vocals make a welcome addition. As a whole, the album’s sound is notably sparer than Over the Rhine’s other cooperative effort with producer, Joe Henry: less sonic ambiance, more pared-down music making with touches of accordion, mandolin, and Bergquist’s tenor guitar. Henry’s light touch offers listeners a summer night of front porch music, assuming your front porch has room for a few well-chosen session musicians.

Over the Rhine’s music digs as deeply into the American tradition as their words, yielding yet another paradox: these new tunes, so specific to location and time, don’t so much echo their musical roots as embody them. From the bluesy “Baby If This Is Nowhere,” through the spirited “Gonna Let My Soul Catch My Body,” to the dark and moody, “Sacred Ground,” these tunes sound old in the best possible way: cold, fresh water from deep wells.

The somewhere Berquist and Detweiler pull their songs from is the tradition they’ve immersed themselves in for more than two decades. It’s also Nowhere Farm in Highland County, Ohio, the home they frequently leave to share in live performances what that place has given them. The contradiction is familiar. Wendell Berry, today’s premier champion of American localism, notes with self-deprecating irony how often he travels around the country telling people they ought to stay home.

Detweiler says he and Bergquist bought their farmhouse “for a song,” and it’s surely songs that enable them to live there, absorbing what Alexander Pope called “the genius of the place,” and turning its slow revelations into music.

I suggest, then, that whether you’re new to the music of Over the Rhine or longtime fans, you give Meet Me at the End of the World a good, long listen. If possible, catch their show if they perform nearby. Stir into the mix some Wendell Berry. Add voices from the American localist tradition to taste. Cover and simmer while you drink in the sounds of the place you call home. Keep quiet. Open your eyes. Pay attention. And whenever you hear it calling your name, take another “swig of a little kickass beauty.”

Brian Volck is a pediatrician and writer living in Cincinnati. He graduated from the Seattle Pacific University Creative Writing MFA program in 2007, and his first poetry collection, Flesh Becomes Word, will appear this fall from Dos Madres Press.

September 18, 2013 The Choir: Children of Krakatoa
Recent Comments
3 Comments | Leave a Comment
Browse Our Archives
get the latest from
Catholic
Sign up for our newsletter
POPULAR AT PATHEOS Catholic
1