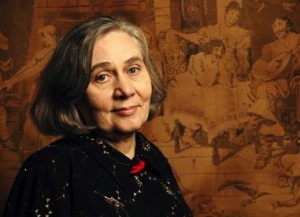 “I’m sick of Flannery O’Connor.” That was the opening sentence of a recent piece by Randy Boyagoda for First Things magazine. It’s what journalists call “a strong lede,” especially when you consider that First Things readers are likely to revere the memory of Miss O’Connor. (He’s also tired of several other major writers from Hopkins and Dostoevsky to Tolkien and Eliot.)

Boyagoda used that jolt to call attention to what he believes is the dearth of contemporary literature that engages religious faith. As he puts it: “serious literary fiction largely occupies its very own naked public square.” To support his case, he cited a recent New York Times essay by Paul Elie, which makes a similar claim: “if any patch of our culture can be said to be post-Christian, it is literature.”

While I’m tempted to engage the broader arguments these gentlemen make (my reply to Elie was published here), my goal today is more modest.

We believe the best refutation of Elie and Boyagoda is to put out a list of writers working at the pinnacle of artistic achievement—writers who not only grapple with faith but do so as honored members of the mainstream literary community.

Over the years we had received a great deal of positive feedback for our list of twentieth century writers of faith, so now that we’re over a decade into the twenty-first century, we thought we’d provide this list of twenty-five authors at work today.

We solicited nominations from the public and received around 250. The list below is taken from those nominations. The selection is not based on the number of nominations but on our collective editorial judgment.

Lists like this are enormously popular, but they are also deeply flawed and to some extent even arbitrary. For one thing, it is very difficult to make such a short list fully representative of every group and genre that deserve representation. We apologize in advance for these shortcomings.

Still, we believe the twenty-five writers on this list demonstrate that the rumors of the death of literature addressing faith are without substance—the result of people with ideological blinders on, leaving them oblivious to the rich literary experience going on around them.

Of course, the comment box is for your feedback—and we’re sure you’ll have plenty of it!

Annie Dillard, For the Time Being

Ron Hansen, Mariette in Ecstasy; Exiles; A Stay Against Confusion

Mark Helprin, In Sunlight and in Shadow; The Pacific and Other Stories

Bret Lott, Jewel; A Song I Knew by Heart

Paul Mariani, The Great Wheel; Deaths and Transfigurations; Epitaphs for the Journey

Marilyn Nelson, The Fields of Praise, Faster Than Light

Kathleen Norris, Dakota; The Cloister Walk; Acedia and Me

Elizabeth Strout, Abide with Me; Olive Kitteridge; The Burgess Boys

Adam Zagajewski, Mysticism for Beginners; Another Beauty; Without End: New and Selected Poems

September 6, 2013
From Luci Shaw to Brother K: My Life with IMAGE
Next Post

September 10, 2013 Spiritual Counsel Part 1: Barking Dogs
Recent Comments
53 Comments | Leave a Comment
"I miss that dragon the most finally it's here. 😳IJ.636PX.CO/c7234i"
Dmaned11123 Poetry Friday: “The Burned Butterfly”
"Ah, so now the imaginary War on Xmas is transmogrified into The War on Santa, ..."
David Miller How to Win the War on ..."
""Aural" refers to hearing, "visual" to seeing"
merphd The Gutenberg Imagination
""It doesn’t matter when you start the Sinatra Christmas playlist or put up your tree. ..."
C_Alan_Nault How to Win the War on ..."
Browse Our Archives
Related posts from Good Letters