Only God is an Atheist, Part 2 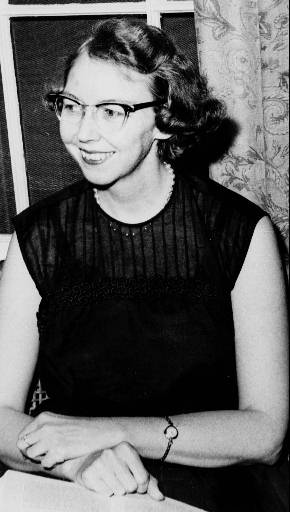 It was not out of sheer flattery that Thomas Merton compared Flannery O’Connor to Sophocles, for the things at which she stared were the very pulp and pith of humanity. Her ability to express metaphysical profundities through her native vernacular is nearly as impressive as the profundities themselves. For it is one thing to express sadness with the objective correlative of a weeping violet; it is another to express the Noumenon by way of a folksy, backwoods serial killer.

In yesterday’s post, I commented on the young O’Connor’s journal to God, published in the September 16, 2013 edition of The New Yorker, insofar as it concerned her prayers about writing. Today, I’ll comment on some other aspects of the journal.

Permeating both O’Connor’s correspondence and this journal is a candor about her spiritual limitations. Her thoughts about the four aspects of prayer reveal an undeveloped soul that she seeks to mature, but finds herself incapable of achieving:

Prayers should be composed I understand of adoration, contrition, thanksgiving, and supplication…. It is the adoration of You, dear God, that most dismays me. I cannot comprehend the exaltation that must be due You.

She worries that her assent to adore is only intellectual, a dispassionate fiat. God must even provide the grace to adore him, she acknowledges, mystified. Still, if that is the way it must be, she asks:

However close she came to that attitude, none can doubt the transfixion of the protagonists in Parker’s Back, The Artificial Nigger, and Wise Blood, all of whom exalt their God with scorched eyes.

She also reflects upon the aspect of prayer that consists of remorse, coming to the same conclusion about her spiritual bankruptcy and God’s plenitude:

Contrition in me is largely imperfect. I don’t know if I’ve ever been sorry for a sin because it hurt You. That kind of contrition is better than none but it is selfish…. It all boils down to grace, I suppose. Again asking God to help us be sorry for having hurt him.

With regard to thanksgiving, she is equally amazed at her deficiencies:

When I think of all that I have to be thankful for I wonder that You don’t just kill me now because You’ve done so much for me already & I haven’t been particularly grateful. My thanksgiving is never in the form of self sacrifice.

Only with regard to supplication does she admit to a shame-faced skill. This passage is perhaps the most poignant for those whose prayers are comprised exclusively of requests:

[Supplication] is the only one of the four I am competent in. It takes no supernatural grace to ask for what one wants and I have asked You bountifully, oh Lord…. Help me to ask You, oh Lord, for what is good for me to have, for what I can have and do Your service by having.

The main point about these reflections on prayer is how deeply convinced O’Connor was of our dependency upon God’s grace, even for the voice, the will, the urge to love him.

God must always reach in his wallet and provide us with the coin that we turn about to pay him with—the coin that bears his image, that buys purchase in his store.

The journal also provides a fresh aspect by which to know O’Connor, though there are allusions to it in her later correspondence. There, when she writes to those who fear of losing their faith, she speaks of her own early confusion. Heartening is the youthful fervor with which she prays for the strength to hold on. But ironically it appears her tenacity is born from a clear-eyed frankness about her weaknesses.

She confesses that I do not mean to be clever although I do mean to be clever on 2nd thought and like to be clever & want to be considered so. When this desire leads to others’ retaliation against her, she asks: Please help me to realize practically how cheap this is. I have nothing to be proud of yet myself.

Her honesty admits a fugitive attention and a mind prey to all sorts of intellectual quackery.

Once more, she seeks grace to protect her soul from her intellect:

The understanding that she is her own antagonist, the too-familiar foe that blocks her progress, is voiced most intensely in the following prayer for transformation. It speaks for itself—as do all things purely felt.

You are the slim crescent of a moon that I see and my self is the earth’s shadow that keeps me from seeing all the moon. The crescent is very beautiful and perhaps that is all one like I am should or could see; but what I am afraid of, dear God, is that my self shadow will grow so large that it blocks the whole moon, and that I will judge myself by the shadow that is nothing. I do not know you God because I am in the way.  Please help me to push myself aside.

Undoubtedly, the battle to “push herself aside” was hard and life long. But in the end, it seems the God of majesty that she so loved—who alone knew that there were no other Gods above him—provided the necessary grace she sought, enabling O’Connor—in the fashion of her boy prophet Tarwater—to push onward, crippled but convicted, towards the place “where the children of God lay sleeping.”

October 24, 2013 The Road to Dogmascus
Recent Comments
0 | Leave a Comment
Browse Our Archives
get the latest from
Catholic
Sign up for our newsletter
POPULAR AT PATHEOS Catholic
1