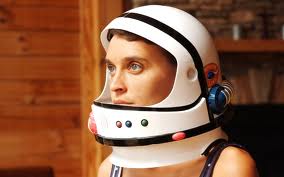 The first time I heard Sarah Masen sing was at the Bluebird Café in Nashville. Sarah took the stage after being introduced as a “songwriter’s songwriter” and a “musician’s muse.” She carried a rich burgundy mandolin and wore denim high-water overalls and heavy boots, her long hair twisted in two small knots near the top of her head. Her wide, welcoming smile was striking and her strong, wiry build made it seem as though, like a bird, she was made to take flight. And when she began to sing, she did take flight, right there at the Bluebird Café.

Originally from Detroit, Michigan, Sarah wrapped her fingers around the neck of the guitar beginning in the mid nineties. Her self titled solo album, released in 1996, garnered considerable attention from the music community and was a solid launch base for her subsequent works which included Carry Us Through in 1998, The Holding in 1999 (a re-release of a previous project), and The Dreamlife of Angels in 2001, as well as a trio of EP projects in 2007: Women’s Work Is Alchemy, A History of Lights and Shadows and Magic That Works.

Sarah’s illustrious music career has witnessed her collaborations with artists and producers such as Charlie Peacock, Jon Foreman, Julie Lee, and Bela Fleck to name a few. She currently lives in Nashville with her husband David Dark and their three children.

Her beautiful melodies are woven, thick and clean, with the poetry of her lyrics. She sings about loss and hope and redemption, about anger and peace. She sings about her children and her loves. She sings right into the listener, her music taking you apart and then carefully knitting you back together. Sarah’s work is her story and all of our stories flying together like birds in a blue sky above a green field of sound and emotion.

Her latest music project, The Trying Mark, issues from that field in the form of a five song EP. Powerful, stirring and strong, The Trying Mark is available now on Noisetrade.com and through her website.

I had the opportunity recently to interview Sarah.

Angela Doll Carlson: Your new work, The Trying Mark, hits hard with its utter simplicity while stirring up so many complicated feelings at the same time. What kind of drugs did you put in these arrangements anyway?

Sarah Masen: Let’s see, there’s your ordinary everyday variety of worry, fear of the unknown, and sleep deprivation. I hope my limitations played nicely into the arrangements; as a mother, my time with the door closed is limited, and as a technological novice my recording skills are primitive. There’s the funniness of waiting for knowledge to come through lots of failure. For this project I kept telling myself I cannot know where I’m going but my work was to show up and try anyway. Eventually the songs settled into their arrangements and like a dream I cannot remember how.

ADC: This latest record brought with it a whole world of newness for you. How was making this album different from your past projects?

SM: This is the first record I have ever engineered. I was afraid I would never know how to do this “right.” There are as many different sound possibilities as there are waves upon the sea, but over time the fear gave way to experience, experience to compassion, and compassion brought knowledge. Of course the knowledge was some strange closing of the circle because I ended up feeling that there was no secret knowing in the first place, only the fruit of “just do it.”

My favorite albums have taken on a new magic as I marvel at the sonic pleasure a certain moment at a certain time in a certain place with certain equipment operated by certain people still gives me after years of listening. How can all those “maybes” choir such harmony? Gift-attack. No knowledge without a curious hand upon a curious dial.

ADC: You get around, music-wise. Your fingerprints are all over the Nashville music scene with collaborations, side projects, and what not. This solo project feels different though, like it came through hibernation more than collaboration. Would you say this is accurate?

SM: In retrospect, I think I tried to take a break from any angling on the map of mattering. Conversations with friends often revolved around the finite games of marketing, social media, and sonic trends and how deceptively infinite they feel. All we could do—the least we can do—is laugh at our perceived need to hurry up and matter, agreeing together over how so much of what we think we are up to is (sighs) sometimes masked immortality projects.

There is nothing like a cuddle in the weird arms of Death to put one into a hibernating state of mind.

On the other hand there is no work without collaboration. It wasn’t enough for me to have a room of my own. I also needed a sentry to stand guard outside the door to redirect children, answer phone calls, and slay dragons for dinner when I was tied up “hibernating.” My husband did that for me. He was also my library pirate leaving books in happen-upon-able places to aid in all the appropriating I do whilst songwriting.

If you, like me, enjoy falling down the rabbit hole of the works cited section, Gregory Orr, Dorothee Sölle, Ernest Becker, James Carse, and Audre Lorde are a few of the voices you will hear throughout The Trying Mark.

One last bit of collaborative shout-out. Artist and composer Aaron Roche played “call and response” with me on all of the songs. I would send him tracks, he would respond with his. It was such a gift to be able to dance with his sonic sensibilities.

Angela Doll Carlson is a poet and essayist best known for her blog Mrs Metaphor. Her first book, Nearly Orthodox—On Being a Modern Woman in an Ancient Tradition, is due out from Conciliar Press in Summer 2014. Angela currently lives in Chicago, IL with her husband, David and her four outrageously spirited yet remarkably likeable children.