What We Wish For, What We Think Is True, Part 2 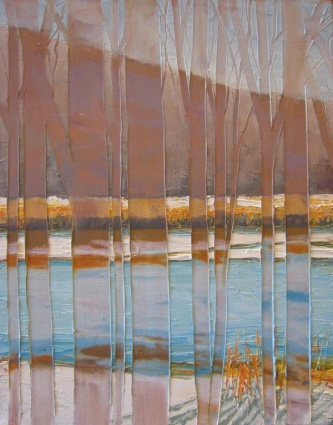 After we’ve gone our separate ways to work, the philosopher comes by my apartment for a beer. In addition to Descartes, this afternoon he taught Shakespeare, Sonnet 40. We walk out to the side yard, to a gazebo ringed with wood chips and dead leaves, gaze at the oaks wrapped in kudzu. I smoke American Spirits and he smokes a pipe and tells me about reading lines aloud to his students from that desolate verse: Take all my loves, my love, yea take them all.

It’s a poem reckoning with betrayal. The speaker’s mistress has taken up with his best friend. The word love repeats plaintively—love, love’s, loves—ineffectually, like a dead lighter that won’t produce a flame. Or as one commentator has it, like a spell cast to keep love from flying away.

I picture my friend reciting the sonnet’s lines aloud to his class, reciting and remembering the times he and his wife read to each other from old Russian novels (how different it feels now reading alone at night). I wonder if any of his students suspect how close Shakespeare is to describing the backdrop of their professor’s life.

Do they think about what lay behind his intensity? What makes him grip his pencil hard enough while reading that it accidentally snaps like a piece of straw in his hand?

We sit under the gazebo as he runs through the sonnet’s arc, recalling phrases. Lascivious grace, that’s a good one. His voice has a rarefied quality, hard to interpret, something beyond anger or self-recrimination, but with traces of each. The tree-lined neighborhood is quiet. Plumes of smoke become like thought-bubbles between us.

And it occurs to me that people of faith are sometimes portrayed as having their heads in the sand, as unwilling to face the truth that life can be harder than even the hardened cynics among us would expect. The faithful, in this depiction, are the ones invulnerable to existential crises, those who smile too easily and laugh too often, who in their optimism seem to be advertising.

It’s a caricature, of course, but (in the manner of caricatures) perhaps not without its shred of credibility. For I’ve been a churchgoer long enough to encounter the believer who seems terrified of what lies beyond the surface of things, beyond utter certainty, who appears far too reluctant to consider that we’re all careening toward the unknown and that hidden behind the curtain of our present lives there may not be anything approximating heavenly bliss, but only darkness and time and more darkness, space and a deep quiet, and eleven dimensions of nothingness—and who, in his flat refusal to think hard about what unsettles him, evades the inherent anguish of faith, makes faith synonymous with cowardice.

There are some for whom doubt is always a weakness, some who make of belief a sentimentality that bypasses confusion or pain. Such people are out there, I’m aware, but I rarely meet them.

Instead I meet people like the philosopher. Or I talk with people like my friend Andrew, a red-haired computer programmer and poet, an atheist, who at a party one fall night last year in Ohio, sat smoking Camels on the porch with his back to the crowd and told me there are times he wishes for something more, something other than mechanistic processes and the concrete world he wakes up to every day.

Once in a while, he said, he wishes he could have faith in a God beyond all this, or within all this—this carnival of human histories—but that he can’t bring himself to believe anything of a higher spiritual order or kind exists. I remember that night gaining a new respect for Andrew, for the way he’d chosen his own intuition over what seemed to him false comfort, chosen transparency over condescension.

I was reminded I want to be such a person. And regarding my own faith, such as it is, I might be crazy, I admitted. I hope I’m not, you understand—I don’t think I am—but it’s certainly possible.

They are conflicted characters, these friends, and they paint reality as they see it: beautiful and bleak, filled with or absent of divinity. Reality in all its absurdity…

In their limited wisdom they recognize themselves as absurd.

…And in so doing they remind me that to live torn between the seen and the unseen, between what we might wish for and what we think is true, requires a kind of faith that is nothing like cowardice. It is the opposite of cowardice. It takes remarkable, at times miraculous, strength.

The philosopher and I come back inside. We stand in the kitchen and sift through the CDs he’s brought over, The Cure’s back catalog, then he decides to go. Spilled beer pools outside on the landing. He descends the stairs, head down.

Hang in there, I say.

He walks to the edge of the sidewalk, through the empty parking lot and down a driveway with a NO EXIT sign wagging upside down in the breeze, its message scrambled, the NO flipped to ON.

Isaac Anderson is an essayist living in Kansas City. His work has appeared or is forthcoming in Image, Portland, The Writers Chronicle, Los Angeles Review of Books, and elsewhere. His piece “Lord God Bird” (Image, no. 72) was listed as a Notable Essay in Best American Essays, 2013.

The Demand to Open Churches Is...
suspended in her jar
Related posts from Good Letters