The Problem with Waiting, Part 1 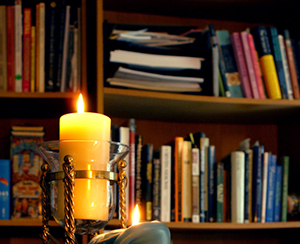 I don’t have much time. I’m sitting in a coffee shop less than a mile from my house and place of employment feverishly re-reading Dana Gioia’s recent First Things essay “The Catholic Writer Today” and pounding out these words. But in an hour I will need to pack up my laptop and books and make the walk back—my morning course “The Elements of Fiction” starts at 9:50 am.

There are two ways of making the walk, one practical the other prosaic. The practical one is the most direct and takes me along the shoulder of a busy two-lane county road whose berm is piled with old snow. The prosaic takes me into the woods behind the elementary school adjacent to this coffee shop. There I can pick up a well-blazed trail lined with towering pines that drifts away from the road and eventually leads to the cul-de-sac at the end of the subdivision where I live.

The path I take will depend on how fast I type, how quickly I can form the right words, how much time I leave myself to make it to class on time. Whichever path I take, I will still be mulling over the problem Gioia’s essay aims to offer a solution to: what is to be done/can be done about the precipitous decline in the influence of Catholic writers on the American literary landscape?

Aside from Gioia, this is a question that has been recently taken up by some very smart and talented people, like Paul Elie, Gregory Wolfe, and Randy Boyagoda. Their stature as writers and commentators is hard-earned, and I count myself lucky to have spent time face-to-face with two of them (Wolfe and Boyagoda) discussing these issues.

I’m smiling as I write this because I am reminded of some in-person hand-wringing conversations I’ve had with Boyagoda. This was several years ago. We were neighbors in an old three-story apartment building in South Bend, Indiana. Randy was a post-doc at Notre Dame, my wife was working in their development (fundraising) office, and I was an adjunct professor.

Elie had just published The Life You Save May Be Your Own and Gioia was only a couple years into his stint as chair of the NEA. So while I don’t remember the exact details of those conversations, there was a general feeling of hope. It was a good sign that Elie’s book on Catholic writers Merton, O’Connor, and Percy was being published to wide acclaim, and Gioia was leading an important cultural institution.

Those were heady times, too, because my first book (A Good War is Hard to Find: The Art of Violence in America) was about to be published by Soft Skull Press, one of the edgy, counter-cultural darlings of the indie publishing scene, and Randy’s first book was about to come out from a major press in Canada and the States. Add to this the fact that an essay by my wife, Jessica, was named a notable essay in Best American Essays. Note that all of us were (and still are) practicing Catholics deeply invested in writing whose sensibility is influenced by faith, not to mention its equally as important counterpart, doubt.

But in the seven years since, while individual authors who happen to be Catholic (Gioia names Tobias Wolff and Mary Karr—a rare convert—among others) have continued to publish work and gain further acclaim, there has been no discernible build-up toward the kind of renaissance that Gioia, Robert Fay (see his 2011 “Where Have All the Catholic Writers Gone?”), and Elie pined for. This, despite the fact that there are roughly seventy-eight million Catholics in America.

So why, Gioia asks, are there are not more Catholic writers striding the literary landscape?  Well, there’s the abuse scandal, there’s the Church’s stance on homosexuality and gay marriage, and abortion, all of which have turned the Church into something of a poisoned well. This is not to mention the slow, painful, decades-long death of liturgical music. (Remind me again why one would prefer “On Eagle’s Wings” to the kyrie?)

What I’m about to say might seem self-serving and hubristic, so let me preface it by saying I don’t believe that the success of a few promising Catholic writers who happened to live in the same apartment building in northern Indiana constitutes the beginning of a renaissance, and I’m not claiming that we were unjustly slighted. But I do want to second Gioia’s point that there seems to be “torpid indifference among precisely those people who could change the situation.”

My experience suggests that the indifference is not just to be found in established Catholic writers but also the Catholic press. Sister Helen Prejean, author of Dead Man Walking, and Gregory Wolfe, editor of Image, were kind enough to lend endorsements to my book, though my emails to Annie Dillard, Mary Gordon, Patricia Hampl, and Paul Elie went unacknowledged. In the end, I was fortunate to have my book favorably reviewed in the New York Times Book Review (I even got a follow-up note from the reviewer saying how much he liked it) and a number of other news weeklies, online journals, and quarterlies.

I was thrilled and encouraged by the reviews, especially given the explicitly Catholic and theological framework of many of the essays, but those feelings were tempered by the fact that it was not reviewed in a single Catholic magazine—not even Commonweal, which is supposed to be the more “liberal” of the publications.

I’m sure there were good reasons for passing on it. Maybe they didn’t think it was any good. Or maybe, the editors at those magazines subscribe to Gioia’s view that the “real challenge” to the resurgence of a Catholic presence in the literary world is finding “a few innovators who can serve as cultural catalysts. Two great poets are more powerful than two thousand mediocrities.”

To which I say, point well taken, but ouch.

David Griffith is the author of A Good War is Hard to Find: The Art of Violence in America (Soft Skull). He is the Director of Creative Writing at Interlochen Center for the Arts in Michigan where he lives with his wife, fellow Good Letters contributor Jessica Mesman Griffith, and children, Charlotte and Alexander. His essays and reviews have appeared in Image, Utne Reader, The Normal School and online at killingthebuddha.com. He blogs at Pyramid Scheme.

January 7, 2014 The Problem With Waiting, Part 2
Recent Comments
0 | Leave a Comment
Browse Our Archives
get the latest from
Catholic
Sign up for our newsletter
POPULAR AT PATHEOS Catholic
1