A Baby and a Book Burning

A Baby and a Book Burning January 3, 2014 Richard Chess 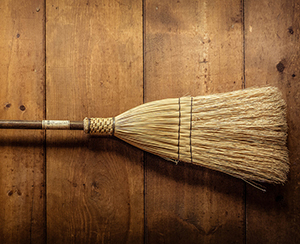 I’ve always wanted to have class by the fireplace, she said.

Great, let’s do that. We can burn our books in the fire, I said. We can decorate the room with swastikas, I said.

It was the last day of classes.

It was a week past my stepdaughter’s due date.

The class was droopy. Then I suggested we burn books and adorn the hallowed walls of the Laurel Forum, home of the honors program, with banners bearing swastikas. Surprised, shocked—entertained—they perked up. Was that my Sarah Silverman moment?

You’re Jewish, she said. You can get away with saying that.

A janitor waltzing with his broom as if it were a woman he’d have to live “another life to meet.” That’s how Cornelius Eady’s poem “Victims of the Latest Dance Craze,” ends—with a vision of a janitor and a broom, spinning out the side door, “avoiding the cracks in the sidewalk / grinning as if he’d just received / the deepest kiss in the world.” By mid-afternoon, when my class called “Readings in Poetry” met, I knew that I was not quite there, in Karpen Hall 221, among students with whom I’d been working for fifteen weeks, inside Eady’s poem.

(After class, I would rush home to finish straightening the house and pack. In a few hours I would be on my way to the birth of a grandchild, my first. But I was worried about the forecast: an ice storm expected overnight. What if I couldn’t make it, at 5:30 a.m., down the steep hill out of my neighborhood to the airport for my early morning flight? Before class, after class, I checked, re-loaded, re-loaded, and re-loaded weather.com: my dance.)

Because I was cognitively adrift, I had to rely on their intelligence—the students, I hoped, had gotten better at close reading over the semester.

“The streamers choking the main arteries
Of downtown.
The brass band led by a child
From the home for the handicapped.
The old men . . .”

(The old men: my birthday, my sixtieth birthday, was a mere five days away.)

The poem offers a prophetic vision of “the world (what’s left of it) / In brilliant motion”, “a world where no one has the right to stumble.”

When I finished reading “Victims of the Latest Dance Craze” aloud, we went around the circle, each student offering one observation about it.

The first few comments were vague, disappointing. Nothing for me to build on there.

Then she, a shy young woman, said in words more precise, concise, and eloquent than these, “the lame lead, the bus is free, ‘the drinks are on the house,’ the shy girls twirl their skirts, but the arteries are choked and the dance, they explain to the cop, is called ‘scalding the air,’ the dance is called ‘dying with your shoes on.’ And the children call their game ‘dust in the mouth.’ Sure, they’re dancing, maybe they are even redeemed, but their suffering, their mortality dances with them.”

Nothing more needed to be said, but we were only a quarter way round the circle.

This baby, this not-quite-delivered-unto-us boy we, especially his mother-to-be, were anxious to receive—what has the world to offer him, what has love already done to whatever he was before he was conceived? I didn’t know to ask this that Monday, the last class before finals, four days before his birth.

Today, weeks later, I ask, what is love doing to us, his complex family of families, a potent mix of religions, nations, languages, distances, dreams, jealousies, secrets, fears, drawn as we are from Teheran and Asheville, San Diego and Chapel Hill and Cherry Hill and Brooklyn to his opening and closing and opening eyes?

But at the end of that day, end of another semester, end of a personal decade, I stood in the center of a circle of students, wanting this, only this: to be loved.

They said what they said. Then it was my turn.

I led with an observation about their comments on the poem, hoping to validate each student’s comment, even though most were useless, only a few brilliant. Every comment, I said, if carefully considered, could lead to insight. I lied.

I closed with this: the deepest kiss in the world: that’s what poetry gives me and why I cannot live a day without it, without that kiss. But these words, too, were not the whole truth. They lacked gravity, and without gravity for them to affirm by defying, they would lift and awaken no one, not a single dull student, not even the bright few on a gray Monday afternoon after all the work to be graded had already been turned in.

On the plane to Newark, I realized what I should have said.

What’s the deepest kiss in the world? The kiss that holds all the disappointment, impatience, superstition, injustice, and loneliness in the world—along with all its beauty, honesty, promise and love: what a poem is.

Snow erased the final meeting of the Sabbath class. My flight back to Asheville was cancelled because of a storm. We would not feed The Sabbath World, The Sabbath, and A Timbered Choir to the flames. We would not eat pancakes by the fire, its glow illuminating the absence of banners bearing swastikas in the room. No closure.

And I could not call the poetry students back for truth.

January 6, 2014 The Problem with Waiting, Part 1
Recent Comments
2 Comments | Leave a Comment
Browse Our Archives
get the latest from
Catholic
Sign up for our newsletter
POPULAR AT PATHEOS Catholic
1