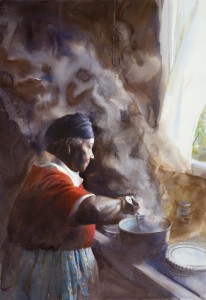 Whenever you detect the mysterious smell of lavender in a house, it means a friendly spirit is passing through one of the nearby rooms. The fragrance has to come out of nowhere, I’m told, and it has to be strong. Otherwise, your mind is just playing tricks on you.

And if you see pennies lying around on tables and windowsills, that means the spirits have “been visiting” while you were out. Again, nothing to be alarmed over; just some of the everyday goings on in a world deeply infused with things from well beyond it.

All of this knowledge comes to me by way of a lady who’s worked for my family ever since I was a boy—call her May Iris—and has lived in the very same place since she was a girl. She knows all kinds of things like that, full of a wisdom that’s being lost at a rate too clichéd to remark upon.

For instance, she can distinguish, to the day, between blackberry winter, locust winter, and dogwood winter (in the South, important parts of spring; there’s a mesmerizing story by Robert Penn Warren called “Blackberry Winter”).

May Iris knows how to cook greens, preserve fruit, fry green tomatoes, make mouthwatering salmon croquettes (pronounced by sounding the “l” rather self-consciously, as most had never heard it said different back when the only way you could buy salmon was in a can). She will make curtains, laying them out on the floor and piecing them together with an array of pins held in her mouth, and can needlepoint pillows, sew bedspreads, and patch quilts.

She can even strip tobacco and cure it the old way, hanging it in stalks from the eaves of a bleached barn, its rich golden ears dangling down in a solemn field above you, inverted, like the harvest of an old world god.

But I’m straying away from my lesson—which is about ghosts. I don’t hold to any of this stuff (though as a child I was crazy for such stories in the sunshiny daytime, then regretful of having heard them in the soul-filled night), but I do find the tales interesting. I’ve heard tons of them from women and men who’ve worked for my family through the years.

Now, mind you, this is over a long period of time—and spans farms both in Mississippi and Tennessee—and these are tales of people who lived agriculturally-based lives, working in big fields or at houses attached to them. They were good Christian people, down to the very one, but they never got schooled much, and never grew beyond the pantheistic folkways of their heritage.

Thank God for that, say I. My life has been the richer for it.

One man—call him Silas—who lived on the place, was fond of visiting the palm reader in town. Her salon had a big sign with a badly drawn hand on it, with the thumb broken in several spots (was her name Miss Isidore?). He would come back from his readings with messages from friends and relations.

One time, Silas was suspicious about a man he thought was after his wife. I became doubtful of Miss Isidore’s powers, even if Silas did not, when confirmation of the scoundrel’s identity came through a reading that he reported:

Another lady—call her Dinah—taught me to run across water if the spirits are chasing you, as they can’t pass over it. And if your horse spooks in the same place on the road come evening, there’s a “haint” in that spot; you can’t see him, but the horse can (Balaam’s Ass, I suppose). I’ve ridden lots of spooky horses in my time, so where I’m from must be as charmed as a Tolkien forest.

When Dinah’s husband died, she was both sad and ashamed—sad because she missed him, but ashamed because she was scared he might visit her. She confessed this to me, guiltily, through her tears.

When I was down visiting recently, I was told about the lavender and pennies because there was a death in a house not too far away—the violent death of a young mother, shot by her husband, with a year-old baby still in the crib. May Iris said the folks around there had better be on the lookout. When people die that way, they can’t help but feel restless and confused.

How anybody could ever live there again was beyond her imagining; I admit, it is beyond mine too. Not because of the spirits, but because I would never stop thinking about it. I once dreamed of buying an antebellum home nearby, then found out that it had been a funeral parlor at the turn of the century. My aspirations changed.

Of course, if a house, or a road, or a town, is old enough, it will have many such associated stories—of deaths, both pleasant and natural, violent and strange. It will accumulate lovely accretions that will make your heart hurt when you remember them, but also terrible scourges that will blight the good, like a port wine stain on the face of newborn baby—or like the frightful history of a child in a crib, whose mother will forever have been murdered by her father, while she was asleep in the very next room.

I’ve wondered whether knowing too much is a bad thing. It’s like the Irishman’s dog my grandfather would talk about—he was “too smart,” which is what got him killed. Is it better to live in ignorance of certain things, to walk blithely about and around them, than it is to know and be plagued?

And yet, I guess there’s no escaping knowledge that presents itself to us, like an apple hanging from a shady tree. We always seem to do it; we always pick, and eat.

July 23, 2014 God, Guilt, and Aronofsky’s Noah, Part 1
Recent Comments
0 | Leave a Comment
"Ah, so now the imaginary War on Xmas is transmogrified into The War on Santa, ..."
David Miller How to Win the War on ..."
""Aural" refers to hearing, "visual" to seeing"
merphd The Gutenberg Imagination
""It doesn’t matter when you start the Sinatra Christmas playlist or put up your tree. ..."
C_Alan_Nault How to Win the War on ..."
"Yup."
Max Marvel Finding My Inner Calamity Jane
Browse Our Archives
get the latest from
Catholic
Sign up for our newsletter
POPULAR AT PATHEOS Catholic
1