My Own Desert (Tortoise) Father 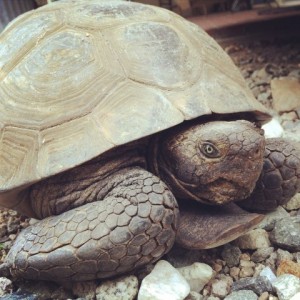 I didn’t spend enough time with Oscar this summer. For forty years I’ve believed time will never run out.

Visiting California, I took my annual walk through my childhood backyard of bougainvillea, crepe myrtle, and fruit. I picked some strawberries, paid homage to my name scratched in a concrete border in 1980, then wandered to the side yard to find Oscar.

I sat in the gravel as he gummed a piece of lettuce hanging in seaweedy strips. He’s always been a sloppy eater, clomping around the yard with leftover pollen or hibiscus petals sticking to his mouth. We exchanged eye contact briefly: aging gray meeting steady green sea-glass. I tapped his nose, just as I did as an annoying kid, and he snorted, yanking his head back in his shell.

My mother rescued the brooding desert tortoise when I was four. She found him lumbering across the street, a reptilian tank with no regard for traffic.  She grabbed the huffing beast and went door to door asking if he belonged to anyone. According to Mom lore, everyone laughed, exclaiming, “We don’t want that ugly tortoise!” and slammed the door.

So we took him home. We already owned Choo-Choo, another rescue tortoise my mom acquired when my sister was a baby. Choo-Choo had been found slowly suffocating, as someone had painted her shell red, white, and blue without understanding that tortoises use their shells to breathe. My mom and grandmother spent days peeling the paint off with their fingernails.

Unlike the docile Choo-Choo, however, Oscar was aggressive.

“He was an angry tortoise back then,” Mom told me. “He had a past.”

A tortoise specialist told Mom that when Oscar snapped, all she had to do was say “no” and flick his shell. Sure enough, he stopped biting and responded confidently to a life of discipline, lettuce, and love.

I spent a lot of time alone as a child, and the tortoises served as my stalwart playmates. I invited them on my imaginary backyard cruise ship, delivering petal salads arranged in rainbow-color order. I carried the tortoises under my arm like library books. And when they mated, a crashing, snuffling affair that never resulted in hatchlings, I politely hula-hooped on the patio until they completed the task.

In the winter, they hibernated. Mom would wrap them in old blankets, tuck them in cardboard boxes, and place the boxes on a shelf in the garage. Come March or so, we’d open the boxes outside and let the tortoises resurrect themselves when they saw fit.

One winter, after I’d been out of the house for years, it warmed up unseasonably early. Oscar crawled out of his garage box, fell off the shelf, and broke his shell. Mom wrapped him in gauze and rocked him through the night.

Choo-Choo died a few years ago at the younger end of the tortoise lifespan of eighty to one hundred years. Oscar is around fifty or sixty to my forty, putting us neck in neck. But I want him to lose this race toward death.

Oscar has to outlive me, for as soon as he dies, history will take a serious turn. When I visit the backyard, he is there, munching on my mom’s organic offerings. My mom is still there, yes, but her stature continues to shrink and her skin continues to sag. She speaks casually now of her mini-strokes.

The household antiques imprinted in my memory may stay in the family for hundreds of years, but they don’t have a pulse. Oscar is a living artifact, my one breathing, unchanging connection to the afternoons I spent telling stories to the soundtrack of doves, coastal winds, and the 605 freeway, whose sustained hum still comforts me.

“Do you think he recognized me?” I asked my mom this summer. Like a child asking about Santa, I knew the answer but wanted her to say, yes, that even though I’ve been away from home since 1990, my face and voice are somehow locked inside his scaly head.

“Tortoises are very intelligent,” she replied right away. “ I just got new stepping stones, and Oscar immediately came over to check them out.”

“ Have you made…plans for him? You know, in case you…”

I was glad to hear it.

The famous philosopher Steven Wright once said, “I intend to live forever. So far, so good.” No matter the billions of mortal examples set before us, most of us believe on a visceral level there will always be a place to return to: a house, parent, landscape, tortoise. But one day there will be nothing left but me, God, and the terror that actual eternity might disappoint.

Of course I want to live a long time. But I want Oscar to live even longer. I want him to die after all of us are gone, slipping out of consciousness to the memory of my eyes, the wind blowing through the hibiscus flowers, my mom cooing, “Let’s keep him. He’s a tortoise worth holding onto.”

July 18, 2014
Caught in the Crosshairs: the Children at Our Border
Next Post

July 22, 2014 Lavender and Pennies
Recent Comments
0 | Leave a Comment
Browse Our Archives
get the latest from
Catholic
Sign up for our newsletter
POPULAR AT PATHEOS Catholic
1