These Boots Are Made For…Beauty 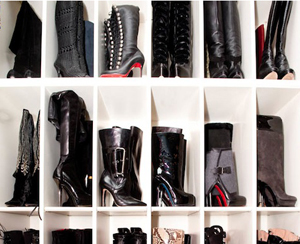 “Uh, yeah I do!” I shout, and shake my butt at the sink. The girls scream and scramble from the room.

The song attempts to come off affirmingly: the girl lacks confidence and stares at the ground, but she’s actually gorgeous, so much so that—get this—she doesn’t even need make up!

Who are these boys, who appear on pink pencil cases at the mall, to decide whether a girl deserves to be beautiful? I’d like to discount the whole notion as superficial and sexist.

But the question still haunts me, almost every day: Am I beautiful?

When I entered middle school, I was not as long and skinny as a string bean, but rather a bean’s string. I wore bifocals, braces, and a braid to my waist. A flatter chest would have been concave. Well-meaning people pointed out that models are tall and thin. Hm. I’m sure they had zits for eyebrows, too.

By the time I reached fifteen, my body finally started to make some kind of sense. I got contacts, lost the braces, and started sunbathing in bikinis. When a popular basketball player heard I had a crush on him, he told his teammate, “She’s cute. But she’s not rad.”

I was actually pleased with this evaluation and accepted my non-rad lot. A few guys found me attractive enough (except for my senior prom date, who confided a week later that he’d always dreamed of going with another, prettier, girl).

Soon, I met my husband. He loved me, and that was enough. I spent most of adulthood employing a ten-minute morning routine—five minutes during the baby phase—and trying to keep my clothes within the decade.

Then I hit forty.

I had vowed not to hit a crisis, but it hit me anyway. I wept over a dead cat we’d bought in our twenties—not because the urinating mess had died, but because her death had ended an era.

I spent a sleepless night reading about pregnancy at forty. I wasn’t considering it, but what if I had? Was there really a big difference between the thirties and forties? My research confirmed it: my body was now advanced. Special. On the road to shut down.

Gray hairs suddenly sprung up like Slinkys. I bought Clairol and a flatiron. Shirts that hit my waistline looked frumpy. I dumped them at Goodwill.  But I still felt off-kilter, like an awkward teen among the other moms dropping their kids off for kindergarten.

Sure, I looked fine. But they were rad.

Then I realized what they all had in common.

Boots. Long, sexy riding boots that zip over leggings or jeans. My shoes were slip-ons with special air cushions for support. The ragged edges of my turn-of-the-century boot-cut jeans hung unbeguilingly to my ankles.

The next morning on Facebook I announced my purchasing intentions. The comments went wild. I could have just as easily posted an ultrasound picture of triplets. The comments flashed with opinions, pictures, and purchase links. Arguments ensued. Even my phone lit up with boot-advisory texts. This was a momentous occasion.

That weekend my friend Beth, whose self-assurance and striking figure command the very folds of her clothing to obey her, took me to Target.  She conjured several strategic pairs of skinny jeans to fly off the shelf in a Hogwartsian manner. She summoned forth the tallest, sleekest black boots.

I stood in the dressing room in a sweater and underwear as our kids sat slurping blue Icees. I pulled on the first pair of jeans, sighing at the muffin top that hung over the button. Then I zipped up the boots that landed just below my knee.

She was right. I looked svelte, confident, more imposingly feminine. I would have paid anything for those boots at that moment, even the pre-sale $29.99 price.

Some of us are nagged by St. Paul’s admonishment to possess a gentle and quiet spirit above anything else. Certainly we should spend less time in front of the mirror and more in prayer. (I don’t.) Certainly we shouldn’t worry about impressing men, and, probably even more common at my age, other women. How much energy should we allocate to our looks, if any at all? If Christ can shine through our splotchy skin, do we dare cover it with tinted moisturizers?

A college friend, Suzanne, flaunted the world’s values by wearing whatever outfits she seemed to pluck from the floor: floral stretch pants with striped T-shirts, plaid polos with floor-length skirts. She wore no makeup and let her hair fall long and limp. Here was a pretty woman of twenty who showed up to fellowship meetings with nothing to flash but her devotion to God.  Some could say she was interpreting the Bible rather legalistically. Some could say she was making the most authentically feminist statement of all.

I couldn’t do it. At the same time, I couldn’t do Botox or purchase a five-hundred-dollar purse. The truth is, I often feel simultaneously superior to women who have “let themselves go” and women who primp and spend to (my definition of) excess. Depending on our socio-economic background, neighborhood, and even our church, we fall into an accepted range of how much we should care about our looks.

I was lauded for my new boots when I wore them to church that first Sunday. But if I had shown up with new boobs, it would have been a different story.

I confess that on weaker days I hear that One Direction song and think, this is actually quite sweet. Then I get hold of myself, look in the mirror, and search for the rad within.

January 2, 2014 Look at the Light: Thirteen Songs for 2013
Recent Comments
10 Comments | Leave a Comment
"Ah, so now the imaginary War on Xmas is transmogrified into The War on Santa, ..."
David Miller How to Win the War on ..."
""Aural" refers to hearing, "visual" to seeing"
merphd The Gutenberg Imagination
""It doesn’t matter when you start the Sinatra Christmas playlist or put up your tree. ..."
C_Alan_Nault How to Win the War on ..."
"Yup."
Max Marvel Finding My Inner Calamity Jane
Browse Our Archives
Related posts from Good Letters