Bar Rescue, the Wedding at Cana, and Me 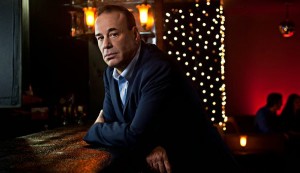 I hardly ever go to bars, and when I do, I tend not to drink. I don’t like the taste of beer and even a drink or two can give me insomnia.

So why am I addicted to the reality show Bar Rescue?

I’m not the intended audience for the show on Spike TV, a network that “knows what guys like,” as their website says. The advertisements feature starlets suggestively eating Hardees burgers and men satisfied with their aerodynamic razors.

Still, I’m mesmerized by each formulaic episode. Attempting to account for this, I reflect on my past. Until my early twenties, I didn’t eat well or exercise or even know how to share my emotions with others.

I had no one to coach me, but, determined to change, I found books on healthy living and put into place my own systems. Knowing that new habits form more easily in times of change, I took advantage of the upheaval of moving into an apartment and starting a teaching job.

I found a strong community at a church where the priest once read an Adam Zagajewski poem (“Try to Praise the Mutilated World”) as part of his homily. Most importantly, I began to toss into the garbage the cassette tapes playing over and over in my head that told me supposed “truths” about myself—for example, that people didn’t want to be my friend.

When people I haven’t seen in years say “You look so great!” I know it’s not just the weight loss or better taste in jeans. I’ve been redeemed from self-deceit and defeat.

Taffer—a man in his fifties with a receding hairline, big-and-tall blazer, and New York accent—sits in a parking lot with a portable video monitor, watching a typical night at the bar, and becomes enraged at some point by something beyond the pale. He goes inside, notices the horrible things that they’ve done wrong, and yells at the workers and management. There’s always a lot of yelling in the first half of the show.

Later, Taffer brings in bartending, cooking, and serving experts to help him retrain employees. He gives them a “stress test,” filling the bar to capacity all at once and (no surprise) they fail at that speed. More yelling.

Then, things turn around: Taffer and the owners reconcile as he tells them his vision for their new bar. He and his team continue to train the employees (delicious looking drinks, well-presented food), renovate the interior and exterior of the bar, sometimes rename it, and re-launch with positive results.

For example, “Muscle Madness,” an episode from the fifth season, features The End Zone, a sports bar in Houston owned by two former male strippers. Large-armed in their muscle shirts, they weep as they think about how their immense debt could affect their kids, and they nearly brawl while Taffer watches from the parking lot and all the employees (including their wives) take sides.

When Taffer and his team tour the place, it’s filthy: standing water under the bar, grease-encrusted kitchen lights, one with a dead cockroach and cricket inside. They force the owners and employees to clean the bar and kitchen. Twice.

Although the show emphasizes drama and conflict, I watch for the arc from failure to transformation and redemption. Other than the occasional dramatic firing mid-episode, Taffer doesn’t let people go. He focuses on giving the staff the skills and environment they need to succeed. In “Muscle Madness,” a female bartender, Kiana, who was drunk the first night they visited and has a four-year-old daughter to support, gets a second chance. “Be kind,” the expert bartender tells her. Kiana smiles widely at re-launch, able to make several drinks at once.

We all want to believe the unclean parts of our past can be bleached and disinfected, like the bar cooler once populated by dead bugs, now cleanly stocked with ice. We all want to feel like we can become better at what we do, with the right support.

I think of Saul, remade—through a bolt from the sky—into Paul. Of Stanley “Tookie” Williams, co-founder of the Crips who, sentenced to the death penalty for four murders, began writing anti-gang children’s books, helped negotiate a truce between the Crips and the Bloods, and was nominated for the Nobel Peace Prize five times.

Though it involves a more literal transformation, I think of the wedding at Cana, the original Bar Rescue.

I know that Bar Rescue and shows like it are carefully crafted to emphasize redemption. A website, Bar Rescue Updates, argues that producers ask employees to exaggerate conflict early on, and it scours bar workers’ social media accounts to find evidence of the show’s manipulations.

Apparently, Justin, co-owner of the End Zone, said on his Facebook page that the show had contacted him in the first place. When someone asked if he needed the help, he responded, “No, but a free new bar and all the advertisement is hard to pass up.”

In the episode, as Justin sits talking to his wife about the fight the night before (surely a posed scene), behind him we can see the shadow of Jon Taffer through the window next to the front door. When he opens the door into the darkly lit bar, a purifying white light streams in briefly with him.

At such moments, I’m a sucker: I suspend my disbelief. I trust that redemption is real. I still have areas of my life that need an overhaul. And I can’t wait for the next season of Bar Rescue to start in October.

Lisa Ampleman is the author of a book of poetry, Full Cry (NFSPS Press), and a chapbook, I’ve Been Collecting This to Tell You (Kent State University Press). Her poems have appeared or forthcoming in journals such as Poetry, Image, Kenyon Review Online, and 32 Poems, and her reviews and prose in Diagram, Pleaides and Southeast Review Online. She is a Mullin Scholar at the Institute for Advanced Catholic Studies at USC from 2013-15 and lives in Cincinnati.

September 24, 2014 Rubble and Re-Creation
Recent Comments
0 | Leave a Comment
"Ah, so now the imaginary War on Xmas is transmogrified into The War on Santa, ..."
David Miller How to Win the War on ..."
""Aural" refers to hearing, "visual" to seeing"
merphd The Gutenberg Imagination
""It doesn’t matter when you start the Sinatra Christmas playlist or put up your tree. ..."
C_Alan_Nault How to Win the War on ..."
"Yup."
Max Marvel Finding My Inner Calamity Jane
Browse Our Archives
Related posts from Good Letters