Surrendering the Lead: An Observation from the Way of Saint James, Part 2 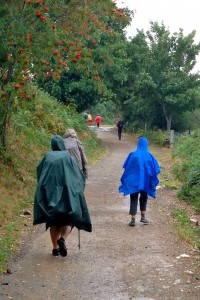 On our seventh day walking El Camino de Santiago, my husband and I rose before dawn and departed O’Cebreiro, a Celtic mountaintop village with cobbled streets and numerous pallozas—round, stone houses with thatched roofs. We walked beneath the moon and stars, soon joining a group of eighteen young adults we’d met a few days before.

Guided by a few pilgrim headlamps, we headed down a wooded track. It wound around the hill before descending to the hamlet of Liñares and ascending again. The sun began to rise, revealing an ethereal horizon of green hilltops floating over morning mist. This is where Megan caught up to us, and my husband walked on ahead so the two of us women could talk.

Megan is a blue-eyed Millennial, a genial girl-next-door with a graceful stride. She told me nothing makes her happier than teaching and working with kids. Just a few months before the Camino, she completed a MEd in educational psychology. Through the summer she worked as a camp coordinator. She enjoyed it very much, but the job was seasonal and had ended. On the Camino she was pondering her future, worried that she’d found no other job and scared that she never would.

When Megan and I reached Alto de San Roque, she stopped at a monolithic statue perched on the edge of a bluff—a trekking medieval pilgrim carrying a walking stick. There some of her friends were taking photos, gulping water, and gorging on croissants.

I continued on the path to Padornelo, which passes a pretty, stone chapel and climbs steeply for a stretch before plunging towards Ramil, where pilgrims, sheep, cattle, and chickens share a corredoira—a narrow lane walled with granite. By late morning, light rain began to fall. As I was pulling on my poncho, Rochelle and Erin joined me. We walked and they talked about their lives.

Rochelle is an athletic twenty-something with long blond hair and a bright, wide smile. She professed a passion for the Catholic Church and hoped to dedicate herself to serving it. With a BA in political science and comparative religion, she’d found a job at a diocesan chancery and had been there for two years. She told me only God knows what’s in store for her, but in the meantime she was happy where she was. She was walking The Way because she felt she had something to prove to herself and she couldn’t rest until she did.

Erin is a gregarious Gen Y-er with chic, dark hair and cerulean eyes. She’d earned a BA in linguistics, planned to work in bilingual education, but realized teaching didn’t suit her well. She wound up in working in high school youth ministry. That job had disillusioned her, so she quit and embarked on the Camino, hoping to become re-inspired. Her goal was to pinpoint a career that would help others and gratify her.

As we talked, the three of us meandered a trail above a wooded valley. After a while, the drizzle tapered off and the clouds lifted a bit. The path began to ascend and soon I felt the need to slow my stride. The two girls offered to stay in sync with me, but I encouraged them to keep their pace, so they nodded and hiked on.

Within moments they were ahead of me, joining their marching, ponchoed friends. Orange-berried rowan trees swaying along the roadside, the queue of young adults briskly climbed the hill, their ranks stretching out before me as far as I could see: Blake, Megan, Lisa, Monica, Milo, Katey, Bryson, Julie, Alex, Liz, Vincent, Helen, Erin, Ruth, Rochelle. As I watched them soldier on, a wave of peace swept through me. I realized we were just where we should be, with them leading the way and me bringing up the rear.

I’d been wrong about their generation. Far from being unaccomplished and inconstant, they were strong, smart, caring, skilled, determined, with lots of love in their hearts and lots of dreams in their heads. They deserved to reach those dreams, but being young they had only just begun, had not yet had the chance to succeed.

On the other hand, I’d had my chance. During my fifty-something years, I’d accomplished many, many dreams. I had a family, home, and friends, and yes, a long career. Between the young adults and me it was only fair that employers would choose them. Perhaps it was time to surrender, accept my turn to lead was over, and bless the next generation as it passed.

Please understand what I’m saying: I’m not condoning ageism; older workers need and want to work and have so much of value to give. And, believe me, if I could find a steady teaching job, I would leap at the chance.

At this juncture, I’m simply acknowledging the deal that God has made with every one of us. As we age, we lose things one by one—health, work, possessions, loved-ones, independence, life. We don’t know the timing or the sequence. For me the job went first, and really, I should be thankful; compared to other things I might have lost—and will lose in the future—the job was insignificant.

Once, Jesus entered Jerusalem riding on a special colt as the people lined the streets with boughs and hailed him as their king. Within days, though, they arrested him and sentenced him to death.

Jesus begged God to change his fate; he loved his work and life and didn’t want to lose them. But God ignored his supplication, so Jesus readily steeled himself and did his Father’s will. He surrendered, accepted his time to leave had come, and blessed his disciples as they began to lead the way.

Jan Vallone is the author of the memoir Pieces of Someday: One Woman’s Search for Meaning in Lawyering Family, Italy, Church, and a Tiny Jewish High School,which won the Reader Views Reviewers’ Choice Award. Her stories have appeared in many publications. She lives and teaches writing in Seattle.

September 18, 2014
Surrendering the Lead: An Observation from the Way of Saint James, Part 1
Next Post

September 22, 2014 The Demons That Possess Us
Recent Comments
0 | Leave a Comment
""It doesn’t matter when you start the Sinatra Christmas playlist or put up your tree. ..."
C_Alan_Nault How to Win the War on ..."
"Yup."
Max Marvel Finding My Inner Calamity Jane
"I an confused by the use of "aural" here: "In The Gutenberg Galaxy, he explained ..."
William G II The Gutenberg Imagination
"My friend is looking for a Pepper Smith he served in the army with, was ..."
Christine Budnack The Love Song of Pepper Smith
Browse Our Archives
Follow Us!