Murder in the Synagogue 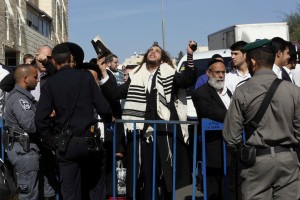 When I see him, I don’t see Israeli. I see Jew.

Like the other men in the crowd at the police barrier on the sunny day when this photograph was taken, he’s wearing a long black coat, black slacks, and white shirt: the standard attire of an ultra-Orthodox Jew.

A traditional tallis (prayer shawl)—white with black stripes—is draped over his shoulder. The commandment (Numbers 15:38): “The children of Israel…shall make for themselves fringes on the corners of their garments.” One of his long, tightly coiled peyot (earlocks)—”You should not shave the corners of your head,” (Leviticus 19:27)—tapers down the right side of his chest. The other seems to be tossed behind his shoulder. Someone more knowledgeable than I could identify, based on the length and style of his peyot, the ultra-Orthodox sect to which he belongs.

He’s strapped into tefillin. The commandment: “You shall bind them as a sign on your hand and let them serve as frontlets between your eyes.”(Them being the words God commands in Deuteronomy 6:8, including you shall love the Lord your God.)

Tefillin consist of two batim (boxes), each containing relevant passages from Exodus and Deuteronomy, attached to black leather straps, one to be worn on the weaker arm, the other around the head. The arm bayit (house), strapped to the bicep, points to the heart. The head bayit is placed between the eyes. The visible (in this photograph) bayit rests on the top of his brow, pointing toward heaven.

This square black box, it occurs to me now, resembles, in miniature, the Ka’aba, the cube built around a black stone believed, by Muslims, to have been placed there by Abraham and Ishmael, a symbol of God’s covenant with Abraham and Ishmael and through them to the entire Muslim community.

The young man’s arms are raised above his head. Though there are police on the opposite side of the barrier against which he stands, he’s not gesturing surrender (“hands up, don’t shoot”), not to policemen positioned there, and not, I think, to the One toward whom he addresses his anguish.

I recognize him. He’s one of us (Jews); he’s one of them (haredim, trembling ones; the ultra-Orthodox). I surmise that he has been offering his morning prayers: he holds a prayer book in one hand. I don’t know which prayer he’s reached in the service, nor do I know if he’s on script or improvising, spontaneous prayer parting his lips: Oh Lord, open my lips that my mouth may declare Your praise (Psalm 51:15).

Praise: is that what he’s doing here at the police barrier, beyond which, one surmises, is the busy crime scene?

Four Jews have been murdered, three of whom were rabbis. Murdered in Kehilat Bnei Torah synagogue in the midst of morning prayers. A fifth person, a Druze policeman, member of the Israeli police force, was also fatally wounded while trying to protect the worshippers.

And here he is, some pious Jew, praying, yes, and, perhaps, praising God, because it’s exactly at moments such as these that one must praise God whose ways are not always known to man.

Glorified and sanctified…blessed and praised, extolled and honored, adored and lauded, be the Name of the Holy One (Mourner’s Kaddish).

And I’ve been to Jerusalem. I’ve lived there. I know the stones, the neighborhoods, the streets.

Though he may be just a few yards from the synagogue in the ultra-Orthodox neighborhood in West Jerusalem, just a few yards from the bloody scene in the aftermath of the attack by axes, knives, and a gun, and though I am many miles from there, transfixed by this photograph in the morning news which I read on my iPad in a warmly lit room in an upper-middle class neighborhood where a few assimilated Jews live among a flock of Christians, some who take their religion seriously, the distance between this aggrieved worshipper and me seems much less than the 6,276 miles that separate me from him.

His heart is in me; my heart’s in him.

I’ve never been in Kehilat Bnei Torah where the four Jews were murdered. But I’m certain I wouldn’t have trouble finding my seat in its sanctuary. I’ve been in many synagogues, modest and grand, in Jerusalem, Prague, Budapest, Barcelona, Venice, Gainesville, Los Angeles, New York, Asheville, Cherry Hill. I know which way to face. I can find the page. I can read the words. I can sing—with feeling!—the tunes.

But I’m not one of them–the haredim. I don’t care for many things they do. For instance, hurling stones and slashing tires of Israeli busses bearing ads promoting female worship at the Western Wall. They did this, some haredim, just a few days ago. God calls The Women of the Wall to prayer. Prayer at the holy ruin, the retaining wall above which on its platform stood the Temple. I follow them.

And if a woman they consider to be immoderately dressed walks through their neighborhood, what would the haredim do then? I won’t say. I won’t say what they would do then, and I won’t say a lot of other things. Not today.

I’m not one of them. But they are part of the story. Is it disrespectful, is it outrageous to say that they, too, are part of our story?

Richard Chess is the author of three books of poetry, Tekiah, Chair in the Desert, and Third Temple. Poems of his have appeared in Telling and Remembering: A Century of American Jewish Poetry, Bearing the Mystery: Twenty Years of IMAGE, and Best Spiritual Writing 2005. He is the Roy Carroll Professor of Honors Arts and Sciences at the University of North Carolina at Asheville. He is also the director of UNC Asheville’s Center for Jewish Studies. The photo above was taken by Gali Tibbon for Agence France-Presse.