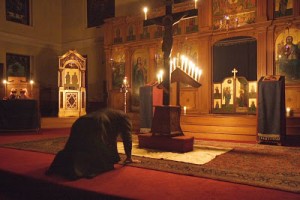 Earlier this year during Lent, I visited a Russian Orthodox monastery on an evergreen island out across the water from Seattle. I’d never been there before, but this local pilgrimage felt somehow familiar.

After the ferry ride across the chilly waters with seagulls in the air, the drive through the woodsy, misty island on winding roads, away from major cities or even a simple corner store, and finally pulling up to a locked gate where I could push a button and announce myself as a visitor, I realized this was exactly like my visits to the various prisons in my state over the last ten years.

As a chaplain in my local Skagit County Jail, I end up visiting the men who are sentenced and shipped off to distant super-max security facilities. The complexes are guarded, somewhat hidden worlds, without much signage out front. There’s usually an obscure road to turn down, and always the little intercom to announce yourself at the gate.

I drove up the hill, past huge, beautiful eight-pointed crosses and old-school icons of Christ, nestled among the mossy timbers and dripping sword ferns, watching me. But unlike how I tighten and tense up, stepping into a prison complex with its sharp surveillance, I felt my insides open; my senses expand inside this monastery’s gate.

The monks at this little monastery—all three of them—were expecting me on this day.

After the youngest monk with his small, scraggly beard showed me to my cell, I washed up and approached the church. It had a blue onion dome on top, like in a small Russian village. The heavy door shut me behind me. It was dark and wonderful. Candles. Incense. Icons covering the walls. But it was small, the size of a living room, and had no chairs, no pews on which to sit down.

The books I’d begun to read on Orthodox worship had told me about this. It wasn’t just about standing in the presence of God with reverence. The church—and especially the monastery—was a kind of spiritual gym, I’d read, where we are strengthened in mind, body, attention, and heart, to bear the weight of God’s love. Where the illness of sin can be dealt with, overcome.

The liturgy talks about receiving Christ’s body and life-blood “for the remission of sins.” Remission, like what happens to a cancer survivor, with proper treatment and a full, healthy lifestyle.

So I followed along. The two elderly monks moving around up front, by the big icons, kept bowing. So I bowed. I stood. I listened as they chanted on. I shifted my weight when my legs got tired.

But there came a part in their prayerful workout that hit me like an especially good chorus in a new song. The old monk spread his arms, his back to me, and said, “O Lord and Master of my life, Give me not a spirit of idleness, despair, ambition, or empty talk.”

And then he tried to kneel.

I later learned that after three decades of such daily bowing, kneeling, and prostrating round the clock, both he and the long-white-bearded abbot had undergone hip replacements.

When I saw his shaky hint at a prostration—I’d read about this too—I took it as an invitation, as a younger man, to sink down and fully kneel myself, alone in the back by the door. I rested my head on the ground. It felt refreshing. To name ambition, despair, and put my head with my palms on the carpet. It felt like something I’d needed for years but it hadn’t been prescribed, or I’d forgotten it was available to me.

I wanted to stay there, in this posture that felt more right to me than most of my own wandering prayers.

The monk, however, was back upright now. “But rather,” he continued, “a spirit of chastity, humility, patience, and love—Give to me your humble servant.”

And back down we went.

It went on like this for a few more strikingly vulnerable prayers. Up on feet, down flat on face, and back up.

It reminded me of the prison workouts so many gang members have taught me upon their release.

“Burpees,” most inmates call them. Sometimes in their garages, sometimes in the apartment driveways between cars, sometimes in backyards, these guys proudly guide me through the motions that had kept them skinny, strong, and sane the years they were away.

Chris Hoke works with Tierra Nueva in Washington State’s Skagit Valley. His first book, WANTED: A Spiritual Pursuit Through Jail, Among Outlaws, and Across Borders comes out from HarperOne in February 2015. Learn more at chris-hoke.com. Read part 1 in Chris’s “Monasticism in Lockdown America” series for “Good Letters” here.

December 10, 2014 Monasticism in Lockdown America, Part 3
Recent Comments
0 | Leave a Comment
"I miss that dragon the most finally it's here. 😳IJ.636PX.CO/c7234i"
Dmaned11123 Poetry Friday: “The Burned Butterfly”
"Ah, so now the imaginary War on Xmas is transmogrified into The War on Santa, ..."
David Miller How to Win the War on ..."
""Aural" refers to hearing, "visual" to seeing"
merphd The Gutenberg Imagination
""It doesn’t matter when you start the Sinatra Christmas playlist or put up your tree. ..."
C_Alan_Nault How to Win the War on ..."
Browse Our Archives
Related posts from Good Letters