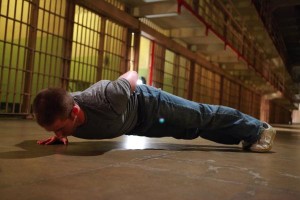 In the “burpees” the guys often showed me after they were home from prison—in their driveways and garages, always getting my heart thumping in my throat and a sweat in my shirt sooner than I expect—I recognized the Orthodox monks’ prostrations I’d learned in the monastery.

The homies in their tight tank tops and huge jeans began upright, then hit fists to their abs, bent down to a full bow, touching knees, then the ground, dropping to pushup position, and back up.

Many guys I know who go off to prison come back home more physically fit, even if spiritually, emotionally, psychologically, they return less alive, burdened with more of the very armor, trauma, rage, secrets, numbness, and sin that monasteries aim to remove.

Not only is there less junk food, an absence of soda, and regimented bedtimes and wakeups in prison; not only is weight-lifting a popular pastime for most men doing hard time; but gang members especially—most of those I pastor—are required among their ranks to constantly train, using burpees as a whole-body workout that fits inside their narrow cells.

They are expected to always be ready for battle.

Monks look at their rigorous practices in a similar way: preparing the instincts of their minds and hearts for spiritual battle in their cells, so that they don’t get so easily beat up by all the temptations, demons, thoughts, fears, anxieties, illusions, and torments that assault the human heart daily.

“We need exercises,” I read from one monk, “to overcome these maladies.” I underlined that part of the book.

I suppose I’d assumed all the bowing and religious physical movements I’d seen performed by monks in movies to be antiquated, pathological expressions of guilt, quivering penance, the anxiety of a slave who knew nothing of love.

But at the monastery I grew interested in these movements—like when I visited my friend’s mixed martial arts and boxing gym. I saw him quit drugs, lose weight, and grow in maturity, all while he moved across the mat in bizarre calisthenics with other young men weaning themselves off video games and bong hits.

The gym offered more for him, recently out of jail, than my weekly small group where we’d read the gospels, pray, and share dinner. The gym engaged his body. It demanded more from him than his mind. He left at night with more peace.

This Lenten prayer of Saint Ephraim I was learning in the monastery was more demanding, too. And it gave me a new peace. It strengthened my easily discouraged heart and pushed me to shed the spiritual fat that slows one down. It was the monks’ burpee, a whole body spiritual rutina.

So I showed it to the guys at the jail a few months ago. It would be my first monastic contribution to the conversation we’d started the week before about ways to turn their lockdown sentence into a monk-like spiritual retreat and training.

But as we pushed the chairs in our circle back against the wall in the jail’s cold, bare multipurpose room, I ended up talking about how much I myself—and so many other people who’ve never been to a monastery or a jail—need such practices.

Guys in red scrubs stood there as I talked about the wave of my generation pouring into yoga studios, where we can step out of our busy lives into a place set apart, out of a butt-in-chair overly cerebral posture at work, at a computer, and at church, and into a position where our bodies help our spirits open, where they stretch and rise and surrender together.

Learning how to use our time, in our cells or in our bedrooms, I said, requires some ancient practices.

“Like spiritual burpees,” I added. “Something to use in your cells during lockdown.”

The guys with tattoos on their scalps and necks nodded, smiled at each other, and we began Saint Ephraim’s prayer of repentance together.

I’m not sure what the guards thought when they looked through their side of the observation mirror, or through the surveillance camera mounted high in the ceiling corner to watch a chaplain in sneakers and twelve other guys in red—bearded old white guys, Swinomish Natives, fidgety youngsters recently off meth, tattooed Mexican shotcallers in the cell block—all getting on the ground, butts in the air, surrendering, but not to the system. To something unseen.

With all the mixed signals firing between these highly guarded men in the circle with me, I’m not sure what each guy was thinking either. Many hesitated when we bent over, and placed our hands on the painted concrete floor.

But I could feel the group’s tension dissolve as our heads touched the cold ground together, absorbed into a new, opened space of humility and mercy.

And a great silence, inside and out.

Chris Hoke works with Tierra Nueva in Washington State’s Skagit Valley. His first book, WANTED: A Spiritual Pursuit Through Jail, Among Outlaws, and Across Borders comes out from HarperOne in February 2015. Learn more at chris-hoke.com. Read part 1 in Chris’s “Monasticism in Lockdown America” series for “Good Letters” here.

December 11, 2014 The Infinite Sincerity of Bill Murray
Recent Comments
0 | Leave a Comment
"I miss that dragon the most finally it's here. 😳IJ.636PX.CO/c7234i"
Dmaned11123 Poetry Friday: “The Burned Butterfly”
"Ah, so now the imaginary War on Xmas is transmogrified into The War on Santa, ..."
David Miller How to Win the War on ..."
""Aural" refers to hearing, "visual" to seeing"
merphd The Gutenberg Imagination
""It doesn’t matter when you start the Sinatra Christmas playlist or put up your tree. ..."
C_Alan_Nault How to Win the War on ..."
Browse Our Archives
Related posts from Good Letters