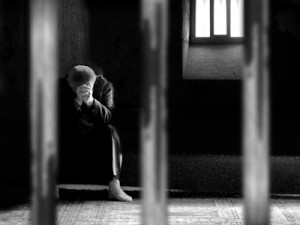 The gentlemen I’ve been visiting in my local jail for the past decade live a daily existence, I’ve often considered, not unlike monks in the monastery I’ve also visited.

They don’t have their wives or girlfriends with them. They all wear the same plain garment—not black robes, but old red scrubs. Their hair often grows scraggly, as they—like monks—don’t have many mirrors. They don’t care what they look like. The food isn’t very flavorful. They’re cut off from what used to be their lives, their own hustles and habits.

Their contact with those outside—overpriced collect calls, the occasional letter—is limited. A good number of them spend a great deal of time praying, reading, writing, contemplating their lives on a level deeper than they would have outside these walls. They spend most of the day in small rooms called cells.

The most important and obvious difference, I tell them, is that the monks I’ve met choose to live this way.

The monks want to know God more fully. And they think such an environment can help. I tell the guys that the monks I’ve visited—both Catholic and Orthodox—seek in such cloisters to shed their false selves, turning away from their distractions and the illusions society offers. They seek to become bare before God, exposing their truest selves, their hidden need.

They want their hearts to be broken, and filled, and expanded with the love of God.

For thousands of years, I stress, men and women have thought such a stark environment to be helpful for such difficult work. A place set apart from the world to pray.

This is why, after all, I myself go to the jail.

I go as often as I can, at least one afternoon a week, if not more. When I tell the guys I wish I could stay the night, spend a few weeks or months in there with them, they laugh and say they can suggest all sorts of ways they can help me end up in there. We’ve several times, half-serious, brainstormed some technical infractions that could land me in there, red scrubs and all, with minimal damage to my ability to return as a chaplain one day.

But misdemeanors aside, the men in the circle of chairs often ask why I come at all, when I don’t have to. “This is my favorite church,” I say. “I’ve been coming here for years.”

That part is no joke.

The mercy of God is what I seek. It is what I love. And so I want to be around it, the way my outdoorsy friends can’t stay off the trails or off the Cascade peaks; the way birders’ necks crane at the slightest song in the leaves; the way rock addicts stand front row at a concert and feel the raw emotion vibrate through their bones; the way art lovers frequent museums and galleries.

For me, nothing can beat that elusive, invisible rush of heavenly mercy making contact with a crushed heart. I want it to wash through me, repeatedly, to take the normal grime of boredom, ambition, anxiety, and despair off me, over and over again. I want it make me soft once again, soak my calloused edges, freshen my mind—that I might smell of bright, sweet tenderness and mercy when I leave, for a few hours, maybe.

I go to the jail as a volunteer chaplain the way drunks hit a local bar. Some wouldn’t mind staying through the night.

Mercy, like music, hums better in certain venues, in certain conditions of heart. Monks, in their chosen walls, are keenly aware of their need for mercy. That is, their sin. And apart from a monastery, I tell the men, the jail is probably the best place to be among people who are also faced with what a mess they really are.

“So if you guys already have such a monastery-like place here, would you want to go ahead and learn some of the ways monks use their time? How to use your cells, in this merciless system, to become students of mercy? Want to learn some of the ways they think and pray, which I’m starting to practice in my own life?”

I’ve opened with something like this the last several groups I’ve led. It always surprises me how happy they seem with the whole idea.

I warn them that there’re some repetitive, simple prayers and physical postures—lots of bowing, knees and hands and foreheads on the hard ground.

They’re in, they tell me.

I guess I’m expecting that they’d ask me to get back to a Bible study as usual. Or just look around awkwardly at this monastic stuff. Or dispute the comparison between an abbey and jail.

But they’ve been into it. Maybe it’s because these men facing criminal charges, trapped in a facility, are no different than the many of us on the outside looking for “spiritual retreats,” visiting monasteries in deserts and on coastlines and in rural plains.

In my next few “Good Letters” posts, I will continue this small series exploring the overlap between monastic spirituality and the men I pastor who are inside the growing reality of “lockdown America”—a nation with more people behind bars, per capita, than any other in the world. I will recount specific practices we’re trying inside the local jail, as well as a recent visit to an Orthodox monastery with a man just released from solitary confinement.

Chris Hoke works with Tierra Nueva in Washington State’s Skagit Valley. His first book, WANTED: A Spiritual Pursuit Through Jail, Among Outlaws, and Across Borders comes out from HarperOne in February 2015. Learn more at chris-hoke.com.

October 30, 2014
Breaking the Fall in Alice McDermott’s Someone
Next Post

November 3, 2014 Praying the “Sleeping Tune”
Recent Comments
0 | Leave a Comment
"I miss that dragon the most finally it's here. 😳IJ.636PX.CO/c7234i"
Dmaned11123 Poetry Friday: “The Burned Butterfly”
"Ah, so now the imaginary War on Xmas is transmogrified into The War on Santa, ..."
David Miller How to Win the War on ..."
""Aural" refers to hearing, "visual" to seeing"
merphd The Gutenberg Imagination
""It doesn’t matter when you start the Sinatra Christmas playlist or put up your tree. ..."
C_Alan_Nault How to Win the War on ..."
Browse Our Archives
Related posts from Good Letters