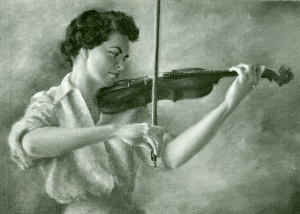 In an effort to help believers who struggle with prayer, many evangelical speakers and books have attempted to break the discipline down into manageable parts. As a young adult, I learned the acronym ACTS as a way to structure my conversations with God (Adoration, Confession, Thanksgiving, and Supplication). I’ve purchased, begun, and abandoned at least a dozen prayer journals and apps.

There’s nothing wrong with methods that help us commit to spiritual practices. However, these strategies haven’t helped me, at least lately, feel any more in tune with God. Or, to be more honest, I haven’t even tried to use them. I feel burdened by these resources then guilty for remaining silent while believers in other countries literally risk their necks to speak to their Creator.

In his book The Naked Now, Richard Rohr writes that “prayer is actually setting out a tuning fork. All you can really do in the spiritual life is get tuned to receive the always present message.”

As a violinist, I’ve used a tuning fork throughout my life, mesmerized by the silver vibrations of the A I hold to my ear, the tone that resonates at the slightest tap. The metaphor of absorbing the sound waves of God has helped me more than any other “method” of prayer. I never really know what I’m listening for. But I know I want to hear it.

This past weekend, when I traveled to Michigan to spend some time with writing friends, I could pick up just one sound whenever listening for the “present message”: a Scottish song called “Sleeping Tune.” I’d been working on the song for a couple of weeks, and it seemed to have taken up residence in my bones.

Written by Gordon Duncan, a Scottish piper and composer who committed suicide in 2005 at the age of forty-one, “Sleeping Tune” is arranged originally for bagpipes. Despite its title, it seems more geared toward waking than sleep, gradually reaching, in a lilting, minor key, toward a higher level of hope.

As my friends sat writing on the first floor, I shut myself up in an upstairs bedroom, grabbed my fiddle, and stood by the windows spattered with lake water and rain. I thought back to my violin teacher in grad school, a wildly romantic, curly-haired Armenian who had me strip my playing down to its rawest emotions. I dumped vibrato, double stops, and any other flourishes so I could play my feelings without relying on other musically expressive devices.

“You’re a poet,” my teacher said. “Play some pictures. Play the feelings in the pictures. But just with open strings.”

On this morning on Lake Michigan, the light never broke out of the rolling, stormy fog. Purple leaves whirled and stuck to the window. I started to play “The Sleeping Tune” with my brothers and sisters in mind.

I made the high E raw and wan for the one who’d lost two babies in six months. I slid into the B with a slow, lilting grace for the one who’d just been diagnosed with Autism Spectrum Disorder. And for my friend who had lost his job, and for the two struggling with their romantic relationship, I eventually opened a loose vibrato on the highest, most heartening note of the piece.

Opening myself to God’s wavelengths, I rippled, I trust, just a portion of his love back.

I haven’t spoken aloud to God in awhile. But with this song in my head and hands, I’ve been praying without ceasing.

November 4, 2014 Lorenzo the Magnificent
Recent Comments
0 | Leave a Comment
Browse Our Archives
get the latest from
Catholic
Sign up for our newsletter
POPULAR AT PATHEOS Catholic
1