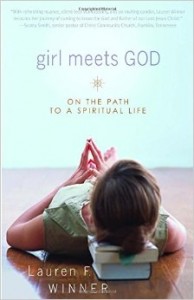 I had used Lauren Winner’s Girl Meets God once before in class, an honors freshman colloquium on the theme of metamorphosis of body, heart, mind, and spirit. On the first or second day of discussing the book, comments made by a few students surprised, stunned, and, ultimately, silenced me.

“I wasn’t raised with any religion,” one student said, “so I can’t relate at all to this book.” A couple other students agreed.

We had barely begun exploring the text. We hadn’t gotten to looking at Winner’s experience and understanding of God, who, if not the main character, is one of the book’s two main characters. That’s how I had intended to discuss God—as a character, the same way we’d discuss a fictional character.

I had hoped that this approach might liberate us from fixed ideas about God—creator of the universe, father and son, transcendent and immanent, cruel judge, abusive parent, excuse for war, love, myth, poison, truth, lie…. I had intended to look at one young woman’s experience of God, and look at the version of God in relation to whom this particular young woman organizes her life.

“I can’t relate at all to this book.”

That comment was enough. That comment undid me. At that moment in class, I decided to stay away from God: too charged a topic for a class at a public liberal arts university.

For close reading, I carefully chose a passage in which Lauren (she’s a friend) recounts when, as a kindergartener, she stole a quarter from her teacher’s desk. We looked at how character, conflict, setting, tension, and resolution work in that short scene: a model for our own writing.

Lauren offers the anecdote as an example of sin and confession, a well-worn path in the life of a woman or man who takes religion seriously. But we’ve all done things, intentionally or unintentionally, we shouldn’t have done. We’ve all had to choose whether or not to apologize and ask for forgiveness, to confess. You don’t need to be raised by devout Christians or observant Jews to relate to this anecdote.

This past semester, I used Girl Meets God again in an honors special topics class: “Spiritual Autobiographies: Theirs and Ours.” In August, as the semester began, I didn’t know how this class, which I’d never taught before, would go.

I knew only a few things. We’d be reading five texts, two of which were Lauren’s recommendations: Darling: A Spiritual Autobiography by Richard Rodriguez; Soil and Sacrament: A Spiritual Memoir of Food and Faith by Fred Bahnson; Chapters of the Heart: Jewish Women Sharing the Torah of Our Lives, edited by Sue Levi Elwell and Nancy Fuchs Kreimer; Fasting for Ramadan by Kazim Ali; and Lauren’s book.

I knew we’d have three writing projects, of which I had an idea, as the semester began, for only the second: an interview-based essay. Students would choose someone to interview, over the course of four meetings, about her or his spiritual journey. This idea came to me while reading Soil and Sacrament, in which Bahnson visits several faith-based community farms and shares with us stories of some of the fascinating people he meets in these communities. Listen to the stories of others: great idea, I thought. I’d figure out the first and third writing assignments as the class progressed.

I knew the class would include contemplative practices to help us explore our inner lives and practice clear and deep listening (to the assigned texts, interviewees, and each other).

I knew, thanks to a diversity climate survey done on my campus a few years ago, that some of our Christian students felt marginalized and even silenced because of their religious beliefs. I hoped that this class would provide an opportunity for my students to speak openly about their lives and the things that matter most to them.

My own spiritual practice was nourished by reading the texts in preparation for the course. For instance, in Soil and Sacrament I read about the first prayer of the morning—at 3:20 a.m.!—in Mepkin Abbey, a Trappist monastery in South Carolina: “the first words to pass our lips since the end of last night’s Compline…O Lord, open my lips…and my mouth shall declare your praise.”

I know those words. Jews say them just before offering the Amidah, the standing prayer that is the heart of daily and Sabbath worship. On occasion, I’ve also said those words to help calm myself before speaking to an audience. Discovering that they are the very words said by Trappist monks as they begin their day closed the distance I sometimes have felt between myself, as a Jew, and Christians.

Those words also gave me an idea: I should pay attention to the first words, firing in my brain, that I become aware of as I am begin to wake. Wouldn’t it be helpful if those first words, arising involuntarily, rather than troubling me with anxiety about the day ahead, oriented me to the blessing of waking to a new day?

I was excited, going into the class, to explore Soil and Sacrament and discuss practices for cultivating one’s spirituality as suggested by the texts and as experienced in our own lives.

Preparing for the class, I didn’t know that for most, if not all, of the sixteen students in this honors class, the idea that one’s spiritual life might be different from one’s religious life would be a new and initially strange concept. This was true even for students who identified (either openly in class or privately to me) as religious. I didn’t know that a couple students would be certain that spirituality played no role in their lives. I wondered why they were taking a class on spiritual autobiography at all.

I also didn’t know that some of the students had been deeply wounded by religion. Forced on them, a few said, by their parents.

Tomorrow, in part two of this essay, we’ll look at how one student worked with that wound.

Image above is the cover of Girl Meets God by Lauren Winner (Shaw Books, 2004).

January 8, 2015 Girl Meets God in the Classroom, Part 2
Recent Comments
0 | Leave a Comment
"Ah, so now the imaginary War on Xmas is transmogrified into The War on Santa, ..."
David Miller How to Win the War on ..."
""Aural" refers to hearing, "visual" to seeing"
merphd The Gutenberg Imagination
""It doesn’t matter when you start the Sinatra Christmas playlist or put up your tree. ..."
C_Alan_Nault How to Win the War on ..."
"Yup."
Max Marvel Finding My Inner Calamity Jane
Browse Our Archives
Related posts from Good Letters