Cutting the Cord: An Observation from The Way of Saint James, Part 2 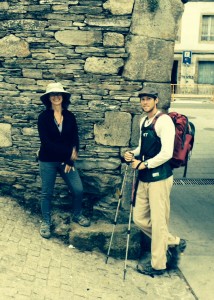 The Way of Saint James—El Camino de Santiago—is a pilgrimage that began in the Middle Ages and remains popular today. Each year pilgrims from all around the world walk from points throughout Europe to visit the tomb of the Apostle James in Santiago de Compostela, Spain.

Some pilgrims make the journey for sport, some to pray for miracles, others for contemplation. Heads swathed from blazing sun, blisters bursting in boots, backs bent under packs dangling emblematic scallop shells, many trek hundreds of miles, spending a month or more on the road, but most walk about sixty miles, taking less than a week.

Sean, my husband, Mark, and I would follow the rugged Primitivo route, hiking 200 miles in twelve days.

The Camino Primitivo is the original way to Santiago, although these days it’s been eclipsed by the much more travelled Camino Francés. The route begins in Oviedo, Spain, a city northeast of the destination with a cathedral called San Salvador that took eight centuries to build.

The cathedral’s Cámara Santa houses the sudarium, a bloodstained cloth claimed to have swathed Jesus’s head in death. Thus, pilgrims on the Primitivo like to scoff at those on the Francés: Why visit the servant and fail to call upon the Lord?

Outside the cathedral there’s a brass plaque embedded in the pavement that marks the Primitivo’s starting point. Sean, Mark, and I set out one August morning, first winding through city streets, then through suburban sprawl. After crossing a metal footbridge over railroad tracks, we passed through a hilly, grassy park, the sky a brilliant azure, the sun warm but not hot.

Soon we came to San Lázaro Paniceres, a tiny town where a hospital for pilgrims existed in the 1300s but which today is known for a wooden hórreo, a common Spanish granary raised on pillars to keep the rodents out. In Lampajúa we stopped at the Capilla del Carmen, one of many tiny chapels that pilgrims through the centuries have built along the way.

After that, the landscape changed frequently. We passed through rural towns of red, green, and yellow stucco houses. We strolled through meadows of poppies, heather, and angelica.

We mooed at curly-horned cows grazing in fields at the roadside. We wandered through eucalyptus forests, the sun speckling the ground.

We crossed footbridges over streams where dragonflies hovered in the mist. All the while a fresh breeze cooled us, carrying the scents of bay, fennel, and mint.

Often, as the hours passed, we switched configurations on the path: sometimes Sean and Mark hiked ahead to yammer about sports; other times Sean and I strolled behind to philosophize about life.

Sometimes we trudged in procession, each of us lost in private thoughts; other times Mark and I hung back to observe and gossip about Sean; and sometimes we walked three abreast to tell jokes or to play I Spy.

In the early evening we reached the turnoff to Grado, a busy commercial town where Mark and I would spend the night in a B&B room we’d reserved. Sean would hike three more miles to San Juan de Villapañada. There he planned to bunk at the albergue—a pilgrims’ hostel run by volunteers where beds were first come, first served.

At the fork, Sean stopped and looked at me. “Got to book it now, Mom, so I can get a bed. See you at the hostel in the morning.”

Of course, I didn’t want to let him go. He’d never toured alone in Europe and his Spanish was rudimentary. I imagined him getting lost, breaking a leg, losing his cash, not snagging a bunk, being bitten by bedbugs, running off with a girl, getting drunk on cerveza.

“I’ll be fine, Mom. Just don’t worry!” Then he hugged me and strode up the path, walking sticks clicking on gravel, knapsack bouncing on his back.

In the morning I was anxious to retrieve him. Shortly after breakfast, Mark and I set out. As we walked down the central street of Grado, local women waved from upstairs windows, calling out in dialect to direct us to the path. The asphalt gave way to cobbles, then dirt. The trail, edged by mauve hydrangeas, ascended steeply up a hill.

We climbed for almost two hours. I could feel my breathing falter and my legs begin to ache.

Where on earth was the albergue? Where the hell was Sean?

Suddenly, there he was, sitting on a bench beneath some trees around a bend. He stood and patted my shoulder: “Steep hill, Mom. How are your feet?”

He had good reason to ask. This wasn’t my first Camino. The year before Mark and I had walked the Francés and my feet had swollen badly; my boots had bruised my toes purple and caused bleeding blisters on my soles.

I brought different shoes for this Camino. “My feet are pretty good, Sean. There aren’t any hot spots, just the mildest rubbing on some toes.”

Sean motioned to the bench. “Sit. Let me take a look.”

So I sat, and Sean plunked himself beside me, pulling my feet onto his lap. He slipped off my boots and socks and began to examine my feet. “Like I thought,” he said. “There’s chaffing on the big and pinky toes.”

He pulled a first-aid kit from his backpack, found some alcohol prep pads, and cleaned my feet methodically. Then he took out a roll of fabric tape, tore off custom-measured pieces, and snuggly wrapped each toe. When he was done, he slipped my socks and shoes back on my feet and tied the laces up.

The next day would be his twenty-fifth birthday—time to cut the cord again.

Photo above belongs to Jan Vallone.

February 4, 2015
Cutting the Cord: An Observation from The Way of Saint James, Part 1
Next Post

February 6, 2015 My God Is Better Than Yours
Recent Comments
0 | Leave a Comment
Browse Our Archives
Follow Us!