The Inner Life of Everyday Objects 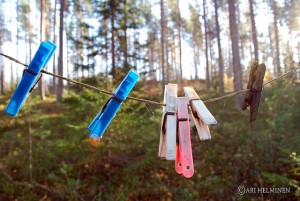 On a morning when I was doing laundry, I was also reading Edward Dougherty’s new collection of poems, Everyday Objects. I would read some poems till the dryer buzzed, then go and fold the dried clothes, then return to reading until the next load was dry.

Because I was moving between these poems and my laundry, as I pulled each item from the dryer I related to it in a way I hadn’t previously. This years-old green washcloth: it has done more than a lifetime’s duty washing my husband’s face.

My socks: finding each one’s mate was like matching up two friends who can’t live apart from each other. That blouse: it has collected all the events I’ve worn it to.

Do objects have inner lives, or are we just projecting our fantasies onto them? Consider these lines from “The Romantic Quest”:

Like hummingbirds
that buzz and whir in their quest
for sweetness, the extension cord

is on a romantic search for beauty

We’ve had odes to hummingbirds a-plenty; but before Everyday Objects, have we had an ode to the extension cord?

It quietly crackles
when connecting that surge,

filled in an instant with
an awareness…

Is it fanciful or profound to imagine that inanimate objects have desires, awareness?

Dougherty’s poems persuade me that it’s both. Take “Emptiness (The Middle Way)”:

they were convinced.
Not merely all-things-
in-moderation,

but the need for tension,
just enough to hold on
in sun and wind

and all the inner storms,
but not so much
to ruin the ride.…

One might say that here it’s not so much that clothespins actually live Buddha’s Middle Way as that they’re offered as a metaphor for the Buddhist values of “all-things-in-moderation” plus “the need for tension.”

Maybe it is just metaphor. And yet…years ago, when our hallway needed wallpapering, we hired a member of our nearby Zen Center—precisely because of the attention that Zen practitioners pay to objects.

I remember saying to myself back then: “Objects hold in them the spirit in which they were made. My wallpaper will continue to contain the spirit of peaceful attention with which it was installed.”

And “The Art of Attention” is in fact in the title of several poems in Everyday Objects. In “The Art of Attention: The Glassblower,” the poet is attending intensely to the glassblower’s own need for absolute attention as he throws “a lump of molten glass, / glowing, into a bulb, / then a teardrop,”

a friendship or a song
to make the baby sleep.
I think of slowly crafting
our own lives in the heat
of attention.

Isn’t this true, that we make our lives out of the materials at hand?

My friend with cerebral palsy has had to make his life out of the disabled, pain-filled body he was born with.  He has crafted a joyful life “in the heat of attention”: attention to his college literature students, to his needlepoint, to his partner, to all of us in the knitting group where I met him.

He takes pains (literally) and transfigures them.

Speaking of “Transfigurations,” it’s the title of one of my favorite poems in Dougherty’s collection, written “for the birth of a nephew”:

This is no lullaby, little man.
We all must pass from one form
of human being to another.
In the heart of each thing
is its opposite. A cross
can be crafted
from manger-wood, a saint
out of any one of us.

The joining of opposites has been a motif in the volume, and here it’s explicit: “in the heart of each thing is its opposite.” In the manger-wood cradling birth, there is the death of Christ—already present in the wood that will become the Cross.

(Early Christmas cards, from the end of the nineteenth century, literally visualized this transformation of manger to cross.)

But not only Christ: “We all must pass from one form / of human being to another.”

Of course our death is inherent in our birth. But, as I muse on this passage of the poem, on the passages and passings of our life, I see many (maybe infinitely) more transfigurations. For each moment we are created, “crafted” anew.

This transience can be dizzying; but it can also be grounding. For me, it can be grounding only if I call and re-call my attention to the God who is the ground of our being. Without this sense of grounding, I’d feel hurled from one moment to the next into ever-changing forms. I’d be almost literally scattered.

I need those clothespins from “Emptiness (The Middle Way).” In fact, I need all the everyday objects in Dougherty’s Everyday Objects: the bathtub, the empty beer cans, the spoon—all in poems I haven’t mentioned. These objects do have a life intertwined with ours.

Without the everyday objects that we’ve crafted and joined to our lives, we’d be wandering naked through a wilderness. With these objects, we craft our daily lives; they’re inseparable from the spiritual grounding of each moment.

In my (Catholic) faith, we talk about “the sacramentality of the ordinary.” It’s the belief, pictured delightfully in Orthodox icons of the Baptism of the Lord, that at Jesus’ incarnation all of creation was sacralized.

So in answer to my initial question of this post: Do objects have inner lives? Yes.

Objects share in our own inner lives and we in theirs. And in Dougherty’s Everyday Objects we see something of how this wonder works.

Peggy Rosenthal is director of Poetry Retreats and writes widely on poetry as a spiritual resource. Her books include Praying through Poetry: Hope for Violent Times (Franciscan Media), and The Poets’ Jesus (Oxford). See Amazon for full list. She also teaches an online course, “Poetry as a Spiritual Practice,” throughImage’s Glen Online program.

The photo above is credited to Ari Helminen, used under the Creative Commons License.

February 18, 2015 The Sex Offender and the Cross
Recent Comments
0 | Leave a Comment
"Ah, so now the imaginary War on Xmas is transmogrified into The War on Santa, ..."
David Miller How to Win the War on ..."
""Aural" refers to hearing, "visual" to seeing"
merphd The Gutenberg Imagination
""It doesn’t matter when you start the Sinatra Christmas playlist or put up your tree. ..."
C_Alan_Nault How to Win the War on ..."
"Yup."
Max Marvel Finding My Inner Calamity Jane
Browse Our Archives
Related posts from Good Letters