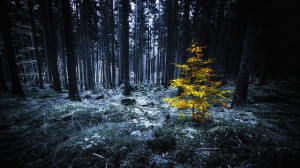 With gratitude and apologies to Peter Cole

I would like you to receive it as an honored guest. Receive it as one would receive grace.

In this very room, on this very train, in the palm of our hand—wherever we are as we return our attention, after it wanders, after it branches in many directions, to the matter at hand, the poem turning in eye and ear—to receive the poem we must create the foundation on which the kingdom of the poem will be established and crowned. The poem, however, travels from the crown down.

Will it help to be quiet for a moment, sit still before the poem is given? Or wander from tree to tree, from woman alone to children at recess to walking dogs to fallen limbs?

To receive the poem, we must enter a city, a forest, a kingdom.

To receive the poem, we must enter a city, a forest, a kingdom within.

Perhaps you have received the poem already, without your knowing it. Intelligence and wisdom, judgment, triumph, majesty: present for you, present within you.

Must a reader be thrown to the ground of being before she can be lifted by the poem?

Mercy: from where will it come now that you, adrift, need it?

Oh, the terrible splendor of the boundless space into which you cry for help, the unsounded white space that surrounds the poem, surrounds and contains it, a visual silence in which the poem is sounded.

Here, a stream of sounds and sights and thoughts:

Kabbalist: one who receives. And “to receive,” writes Marc Alain-Ouaknin, “is to create.”

The poet receives and creates the poem. The poet receives and, writes Peter Cole, using the “ceremonial equipment” of “verse”—“alliteration, assonance, irony, metaphor, rhetorical and rhythmic effects, manipulation of tone”—makes a poem. An “unparaphrasable weave of…writing.”

Among the many poems Cole has received are the poems of Solomon Ibn Gabirol, the powerful Hebrew poet of Muslim Spain, whose work Cole has translated and annotated. Cole’s recovery and discovery of the place and power of ornament—that ceremonial equipment—comes, in part, from his work as a translator of the Hebrew poets of Muslim and Christian Spain as well as the poetry of Kabbalah.

To receive, be created by, and create: the work of a genuine poet. As in this, “What Is,” one of many marvelous creations in Cole’s most recent book of his own poetry, The Invention of Influence (New Directions 2014).

I invite you to receive it now.

What Is
for MRM, in memoriam

The Norway maple’s chartreuse crown
in April ciphers autumn’s flares,
startling with mace-like spikelets of flowers
swelling over the paths of that square

where we wander, adrift in the branching—
or is it what’s branching adrift in us—
wafted as if afloat on a wisdom
flowing through this city forest.

The grid encodes an understanding:
Those who stroll past tines of elms,
who’ll wade the shade of summer’s linden
and trace the mottled bark of planes,

where dogs are walked and judgment is rendered
and power, as weakness, brings down limbs;
where mercy’s continual averment is tendered,
and children at recess dart into rings;

where a woman’s will surges through her
sitting alone in the rinse of her cancer,
as the vapor of chatter’s released in the air.
All part of the terrible splendor—

the weeping cherry shedding petals,
like snow in an ancient ocular rhyme—
the sight, of course, is a site of convention,
the tiniest of triumphs over time,

and yet—somehow, the sarabande combines
as majesty. The rupture and gentle carriage
of kindness. The wind’s extended winding
kiss. The almost now actual: a marriage

not so much of opposites as,
say, analogous aspects—exits
to entrances, or attics holding an axial
weave of sound’s foundation. The praxis

perfecting opens into. An instant’s
happiness putting us back in the business
of funneling the whole shebang, which Kabbalists
have given a name. Kingdom. What is.

Photo above credited to Olli Henze, used under a Creative Commons license.

March 16, 2015 Grace and the Incomplete Flush
Recent Comments
0 | Leave a Comment
"Ah, so now the imaginary War on Xmas is transmogrified into The War on Santa, ..."
David Miller How to Win the War on ..."
""Aural" refers to hearing, "visual" to seeing"
merphd The Gutenberg Imagination
""It doesn’t matter when you start the Sinatra Christmas playlist or put up your tree. ..."
C_Alan_Nault How to Win the War on ..."
"Yup."
Max Marvel Finding My Inner Calamity Jane
Browse Our Archives
get the latest from
Catholic
Sign up for our newsletter
POPULAR AT PATHEOS Catholic
1