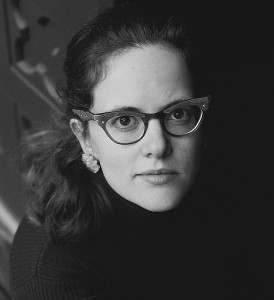 Image: A lot of history makes its way into your new book Wearing God, especially American history. Could you talk about what you think makes a good history book, the kind you like to read?

LW: Two things come to mind, and they don’t always show up in the same book. Some historical episodes lend themselves to almost novelistic writing, and in the last twenty-five years there has been a lot of interest among historians in taking craft seriously, experimenting with narrative form. You see it in writers like John Demos and Simon Schama.

That said, there are plenty of excellent, interesting history books that aren’t so much narratively interesting as they are interesting because of the argument they make or the evidence they’ve uncovered. I have always enjoyed so-called microhistories, where instead of writing a monograph about crime in early America, someone writes a case study of one infanticide in seventeenth-century Braunschweig.

I often enjoy this kind of history the way I enjoy a short story or novel. A favorite of mine is A Midwife’s Tale by Laurel Thatcher Ulrich, which is essentially an exegesis of the diary of a midwife on the frontier of Maine at the turn of the nineteenth century. Ulrich’s book turned out to be quite helpful when, in writing Wearing God, I turned my attention to the Hebrew Bible’s likening God to a midwife.

The other and probably obvious factor is whether the subject matter is interesting to me. I’m interested in histories of daily life, of ordinary people, and less in the history of ideas.

Even as I say that, though, I see a false dichotomy. I have just read an amazing study of women in nineteenth-century southern households, Thavolia Glymph’s Out of the House of Bondage. There, the history of daily life is absolutely inseparable from politics, from ideas about (as well as practices of) slavery, freedom, and power.

Virginia Newman’s idea of freedom: “a blue guinea with yaler spots.” This was Newman’s first “bought dress,” and it represented, for her, control over her “whole life” and, concomitantly, the diminished control white people had over it.

There you have it: state power, consumerism, ideas, and what I’ve unhelpfully glossed “daily life” all rolled into one—and rolled into one in such a way as to diagnose the political work that my own depoliticizing language of “daily life” actually does. I am interested in books that draw, or expose, connections between the daily and the political, the kitchen and the state, the object and the idea.

Image: Wearing God might be your most political book. Was that a surprise? I’m thinking, for instance, of the section in the chapter on bread where you write about the advent of white, factory-baked bread in American households, and why it had such appeal—a story which, you write, is “entwined with our national history of shaming immigrants and shaming women.”

LW: I’m interested in the history of the church in the United States: how Christians see and respond to major events. When I write about the history of the white bread loaf, that’s partially a story about people engaging in the early twentieth-century sanitation movement—and it’s also a story to do with larger national discourses about immigrants and women and women’s work. I’m interested in how Christians qua Christians and churches engage those questions.

In writing the book, I noticed that every chapter does make some kind of political or ethical turn, usually near the end. There was some intentionality about that.

The Bible doesn’t have anything to say about America per se, but it’s of course a deeply political text. It’s interested in how power is and might be arranged. It’s hard to imagine a faithful reading of the scriptures that doesn’t pay some attention to that.

I don’t think it’s the only thing to pay attention to, but the arrangement of power is a register that seems to me to be almost always at play. How could it be otherwise? One of the questions on the table when we read the Bible could always be, what ethical invitation is being issued here?

Image: What are your hopes for the new book, now that it’s done?

LW: I think it’s my richest and most interesting book, and I hope it finds its people. Usually in these pre-publication weeks, I feel like what I’ve written is absolute dreck and should be buried in the garden or in a cave or in a trashcan—but this book, I must say, I just love. It’s not perfect, of course, but I think it is engaging and spiritually provocative.

I did struggle to write it. I rewrote two chapters top to bottom after the copy edit. And there are two paragraphs in the first chapter that I rewrote something like eighty-eight times, and then rewrote completely again at the eleventh hour. I finally landed on what the paragraphs wanted to be, and I think they’re great. It was only when I had finished the book that I realized that.

To some extent, with all my other books, even my one academic book, there was a feeling of trying to fit myself into some shape, of writing to make myself different, or writing as disguise. Wearing God is the first time I haven’t felt that way. I haven’t felt like I wrote it to try to change myself.

Ironically, of course, the book did change me—it gave me a deeper relationship with God. The book feels like it fits me the way a well-fitting dress fits, and there’s a pleasure in that.

April 1, 2015 Never Again: Netanyahu’s Holocaust Cliché
Recent Comments
0 | Leave a Comment
"Ah, so now the imaginary War on Xmas is transmogrified into The War on Santa, ..."
David Miller How to Win the War on ..."
""Aural" refers to hearing, "visual" to seeing"
merphd The Gutenberg Imagination
""It doesn’t matter when you start the Sinatra Christmas playlist or put up your tree. ..."
C_Alan_Nault How to Win the War on ..."
"Yup."
Max Marvel Finding My Inner Calamity Jane
Browse Our Archives
get the latest from
Catholic
Sign up for our newsletter
POPULAR AT PATHEOS Catholic
1