What Is a Christian? 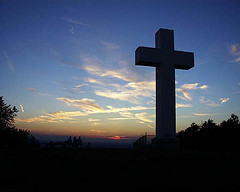 According to recent survey by the Pew Research Center, the number of U.S. adults who identify themselves as Christians has declined—a lot—since the last such survey Pew did in 2007. This information comes out just as I’m in the middle of reading Rachel Held Evans’s latest book, Searching for Sunday: Loving, Leaving, and Finding the Church, a book about Evans’s own frustrations with and hopes for the church and what it means to be or identify as “Christian.”

Though Evans is mostly known as a voice for the generation often referred to as the Millennials, and I am solidly Gen-X, I’ve found myself much in sympathy with her experiences and opinions. Like her, I grew up in an evangelical setting, and in adulthood have struggled with how to categorize, prioritize, and examine (or surrender) my doubts. In a passage that describes almost exactly a process I’ve been through myself, Evans writes:

Evangelicalism gave me many gifts, but the ability to distinguish between foundational, orthodox beliefs and peripheral ones was not among them, so as I conducted this massive inventory of my faith, tearing every doctrine from the cupboard and turning each one over in my hand, the Nicene Creed was subjected to the same scrutiny as Young Earth creationism and Republican politics, for all had been presented to me as essential components to a biblical world view.

For those of us from certain backgrounds (not just evangelical—I know my Mormon friends would sympathize with Evans’s struggles here), this issue of not learning how to separate convictions from persuasions and opinions is a significant factor in why we may leave the church or are reluctant to claim Christianity. We’ve been taught (or managed to absorb) an all-or-nothing kind of theology, and as “all” becomes less and less tenable in light of direct or indirect experience and what we observe in the world around us, we are often more likely to go with “nothing.”

I am lucky or blessed (or possibly damned, depending on who you ask) and have met various people and voices at crucial times in my life to help free me of this thinking. I worship now at a church where I know that if I did my own survey, I’d find among members a pretty wide range of opinions and persuasions about hell and heaven, creation and science, politics and social policy, philosophy, morality, and personal ethics. Yet we mostly manage to worship in unity because the convictions are kept fairly simple and clear and are centered on the character of God as lived in the person of Jesus.

So, some no longer identifying as Christian must fall into that category of people who have felt trapped between all and nothing, and—under the stress of cognitive dissonance between what they’ve been taught and what they observe and experience—have thrown the baby out with the bathwater and moved on.

Russell Moore of the Southern Baptist Convention ponders another aspect of the declining numbers:

Bible Belt near-Christianity is teetering. I say let it fall. For much of the twentieth century, especially in the South and parts of the Midwest, one had to at least claim to be a Christian to be “normal.” During the Cold War, that meant distinguishing oneself from atheistic Communism. At other times, it has meant seeing churchgoing as a way to be seen as a good parent, a good neighbor, and a regular person. It took courage to be an atheist, because explicit unbelief meant social marginalization. Rising rates of secularization, along with individualism, means that those days are over—and good riddance to them.

The other day a friend of mine was pondering religion on Twitter, especially the similarities she perceived between Christianity and Mormonism. She said, “There is this neat idea of being ‘chosen’ and getting special blessings from God for following rules. What is Christianity beyond that?”

I winced, because though I had lots of thoughts about why that is not actually what Christianity is, I couldn’t argue with her tweet, as that is the basic message cultural Christianity has propagated. Maybe, as Moore posits, it’s the cultural or “near-Christians” who are shedding the C-word as they’re finding more room to express disbelief and as the societal value in being a nominal Christian has faded.

I agree with Moore that not only is that not something for the church to worry over, it’s a good thing. If my friend’s tweet with her summary of Christianity is representative of what many perceive about us (and I think it is), then the loudest version of the church hasn’t done a very good job of articulating the gospel. And if Pew Research got me on the phone today and asked if I identify myself as a Christian, I honestly don’t know if I’d feel comfortable saying yes, knowing how misunderstood we have managed to make ourselves and Jesus.

Everyone’s got an opinion these days about why people are leaving the church. Some wish to solve the problem by making Christianity a little more palatable—you know, cut out all this weird mystical stuff about sin, demons, and death and resurrection, and replace it with self-help books or politics or fancy theological systems or hip coffee shops. But sometimes I think what the church needs most is to recover some of its weird…

In the ritual of baptism, our ancestors acted out the bizarre truth of the Christian identity: We are people who stand totally exposed before evil and death and declare them powerless against love. There’s nothing normal about that.

I’m sure if you got Evans and Moore together they’d have plenty to argue over. But I think they’d agree, as I do, that becoming again a people who are known as members of a strange little cult who share all their stuff and forgive recklessly and celebrate a lot and take care of widows and orphans, while preaching against moralism and religiosity, is not regress but progress.

Sara Zarr is the author of five novels for young adults, most recently The Lucy Variations, which the New York Times called “an elegant novel.” Her sixth, a collaborative novel with Tara Altebrando, came out December 2013. She’s a National Book Award finalist and two-time Utah Book Award winner. Her books have been variously named to annual best books lists of the American Library Association, Kirkus, Publisher’s Weekly, School Library Journal, the Guardian, the International Reading Association, the New York Public Library and Los Angeles Public Library, and have been translated into many languages. In 2010, she served as a judge for the National Book Award. In fall 2014, she received a MacDowell Colony Fellowship. She currently lives in Salt Lake City, Utah, with her husband, and online at www.sarazarr.com.

Photo above credited to Waiting For The World and used under a Creative Commons license.

May 29, 2015 Triple Scoop
Recent Comments
0 | Leave a Comment
Browse Our Archives
get the latest from
Catholic
Sign up for our newsletter
POPULAR AT PATHEOS Catholic
1

Doubly-Remote Cooperation in Evil & Vaccines
The whole question of vaccines has been simmering in Catholic circles for...
view all Catholic blogs
What Are Your Thoughts?leave a comment
Copyright 2008-2020, Patheos. All rights reserved.